California Democrats Ready to War Again to Keep Their Slaves 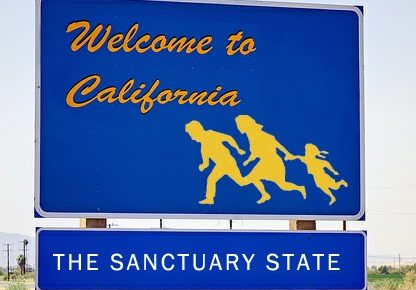 Liberal fascist Democrats are trying to portray Republicans as white supremacist Nazi bigots intent on destroying the race of “brown people” whom California Democrats are now championing against the American people.  The Golden State is becoming a satellite of foreign powers by importing millions of illegals.   Democrats, by giving them the right to vote, essentially make California sovereign over the federal government with the power to inflict its corrupt laws on the nation.  The fools think they are America’s “economic engine” when they have become America’s toilet.

Liberals are trying to portray America as Nazi Germany and Republicans as the Nationalist Socialist Party of Hitler with Trump as Adolf.  They call American patriots “white supremacists” as if they were southern Democrats of the 1850s.  Their efforts would be comical were it not for the millions of Millennial boobs who believe them!  Democrats have created a race of “brown people” who are being oppressed by “white privilege” which applies to anyone who prospers in America including “oreos” who are blacks that work alongside whites.  The “brown people race” includes Mexicans, Hispanics, and Moslems who are all Caucasians, but who all want to destroy Christian America.  (Makes the “brown people” an aptly named race because they are all as full of sh*t as the Democrats when it comes to truth, justice, and righteousness.)  By saying they are “helping people” they pull the wool over the eyes of the ignorant who do not know history and do not understand that Democrats are everything they slander Republicans as being.  They are the pathological lying criminals who say that’s not them in the video robbing a 7-11, but project their guilt on the righteous because they have the hearts of thieves.

California has made it law that anyone to whom they issue a driver’s license, that includes all illegals, can vote in national elections for candidates for Congress and the presidency.  This is an outright betrayal of ALL American citizens!  That half of Democrats are so completely duped by the corrupt deceptions of the other half is why America has been in decline.  Republicans must REFUSE to seat any and all California representatives or senators elected via this flagrant fraudulent violation of American election law.  To seat them when elected by such blatant fraud is to unmake Constitutional law and give them credibility and the right to be the overlords of the United States.  The last time states did this was in 1860 when the South seceded to keep their slaves.  Now it is the Blue State Insurgency.

Democrats cite Republican Texas as their model when they threatened to secede under Obama’s rule.  But that was to maintain freedom from a socialist dictator that wanted to impose Sharia on the nation.  (Yes, that was Obama’s proven agenda that, thank God, he was unable to fully realize.  He did, however, manage to thoroughly corrupt and weaken America while empowering the Jihad.)  Unlike Texas, California is threatening to secede to keep their illegally imported cheap labor welfare voter slaves.  Deluded Californians claim they are America’s economic engine with their big economy.  but their economy is declining thanks to Democrat policies bankrupting the state.  Without the Democrats in control in Washington to give tax break for blue states to deduct state taxes from federal taxes, Democrats are fleeing.  Texas is the state that kept America in the black during the Obama years by growing under free enterprise, while California’s economy generated more waste and loss of income to the nation than any other of the blue welfare states by their importation of cheap, illegal labor and taking more in tax benefits for their welfare voter slaves.  The Golden State has become the Sh*t State with their population of parasites making them the state with the poorest people surpassing even Mississippi.  Perhaps dividing the state in two to separate the good Americans from the liberal whacko coast would be best and let the ultra-rich liberals live alone with their slaves in squalor.  Meanwhile, the rest of the nation (except the deep blue states) is recovering from the Great Obama Depression and rising once again to greatness.

What is making America great again?  You mean who: