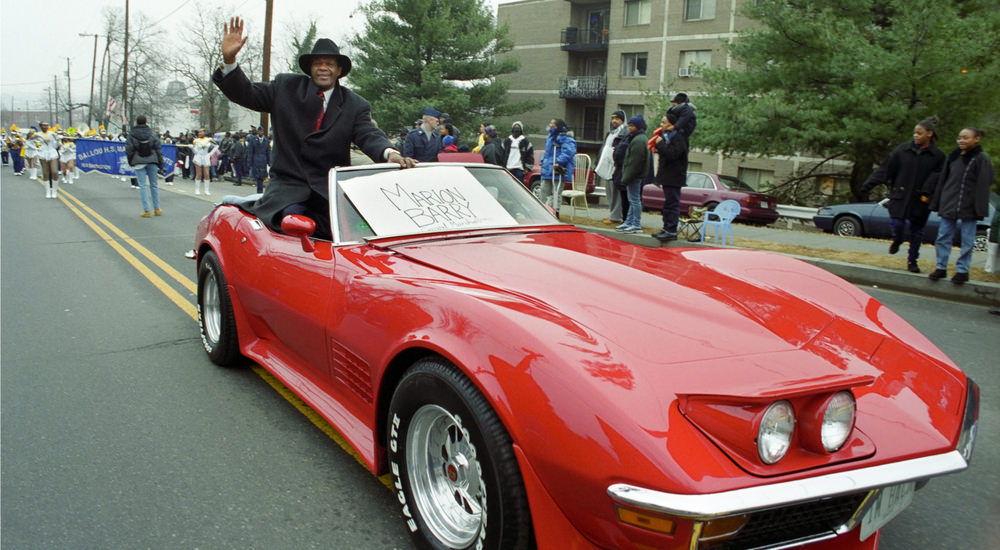 “If ever I become entirely respectable I shall be quite sure that I have outlived myself.” – Eugene V. Debs

Apparently, that’s true of the late Marion Barry: a half-century fixture of local D.C. government. While the American political landscape is chock full of colorful characters—some lovable scoundrels, others not so much—perhaps none fit this category better than the one nicknamed “Mayor for Life”. In that role Barry served for four terms as the district fell into corruption and insolvency. In 1989, at a D.C. budget hearing, then-Sen. John C. Danforth (R-Mo.) publicly chastised his mismanagement:

“Some governments are corrupt but are known for their competency in running the city. Others are incompetent but considered clean. [Washington’s] government is scandalously corrupt and hopelessly incompetent.”

In fact, at his death, he was still in office representing Ward 8, having collectively amassed 16 years on the city council.

On the first anniversary of his demise, current D.C. Mayor Muriel Bowser established a 13-member D.C. Commission to ‘Commemorate and Recognize the Honorable Marion S. Barry Jr’. During a ceremony last week at the Wilson Building, a mock-up of the proposed life-sized statue was unveiled. (Reportedly, his fourth wife Cora Masters Barry, hated the hat: a fedora obscuring Barry’s famous receding hairline. Well, D.C. Commission on the Arts Director Arthur Espinoza, manager of the project, should get that right!) The anticipated cost—to be raised through both public and private sources—is between $350,000 and $400,000.

This eventuality begs the question: with such a checkered past, does this particular individual warrant a grand commemoration?

First and foremost, Marion Barry was a survivor. Notably, last Thursday, March 9th, marks the 40th anniversary of the “Hanafi siege”, a little-remembered act of terror in the spring of 1977. (Hanafi Muslims were a radicalized, breakaway sect of the Nation of Islam.) These black men armed with swords and shotguns took hostages at three locations: a Jewish organization, a rival mosque and the government building where Barry worked. At 41, he was then a fledgling council member who suffered a chest wound above his heart. He recovered, but in the melee a security guard and a reporter were killed.

Another turning point in the then-mayor’s life was January 18, 1990. At the Vista International Hotel—groping former girlfriend Hazel Diane “Rasheeda” Moore—the married Mayor was arrested in an FBI sting for smoking crack cocaine. Videotaped during the encounter and arrest, a muttering Barry blamed Moore: “Bitch set me up . . . . I shouldn’t have come up here . . . goddamn bitch.” In the digital age, that event has been recorded on the internet for posterity. In the future, how exactly does a silent bronze statue speak louder about Barry’s character than his own potty mouth?

For that utterance he became a popular punch line on late-night talk shows. Likewise, he was famous for the remark, “Outside of the killings, Washington has one of the lowest crime rates in the country.” (For three consecutive years, D.C. homicides increased to record-breaking levels, reaching 474 in 1990. The nation’s capital was then called the “murder capital”.) Still, as a survivor of gun violence, Barry was lucky to escape a second life-threatening fate that felled so many of his constituents: drug overdose. (Ironically, cocaine use killed his son—and namesake—Marion C. Barry, 36, on August 14, 2016.) Unlike those unfortunates, the older Barry lived a long life, expiring from cardiac arrest on November 23, 2014.

Indeed, this politician had a long history of running afoul of the law. Even in the waning two years of his life, Marion Barry racked up $2,800 in fees from 21 unpaid parking and speeding tickets. In spite of these violations, he caused a car accident after driving down the wrong way of a street into opposing traffic. True to form, this time the elder statesman blamed a “hypoglycemic attack” for his behavior. However, there is no good explanation for a 78-year-old Jaguar-driving community leader not to have car insurance and current tags.

Undoubtedly, the statue is intended to sanitize Marion Barry’s reputation to future generations as a “champion of the downtrodden”. In the late 60s, he co-founded a group called Pride Inc. intended to help black men find employment. Later, as mayor, he expanded government to accomplish that goal. Yet, who remembers that compared to his decades-long embarrassing escapades of repeatedly flouting the law? For starters, he spent six months in prison for the “Rasheeda” Moore incident. Put aside his local popularity and visible job titles for a moment. His rap-sheet reads like a hardened criminal’s: arrests for drug incidents (1990, 2002), incarceration (1991-1992), income tax evasion (2005), stalking (2009), corruption (2010), public exposure (2011), and political censure for taking kickbacks and accepting bribes (2010, 2013) et cetera.

Marion Barry’s backers can superficially immortalize his likeness—but nothing will expunge his lengthy track record of wrongdoing. Even his outspoken supporters would likely acknowledge a deeply flawed human being. In the final analysis, the man’s shameless and often illegal antics obscure any do-gooder residue gained early as a civil rights activist. Therefore, perhaps it’s kinder to leave Marion Barry’s “legacy” unbronzed: a well forgotten, but colorful footnote in local D.C. affairs.