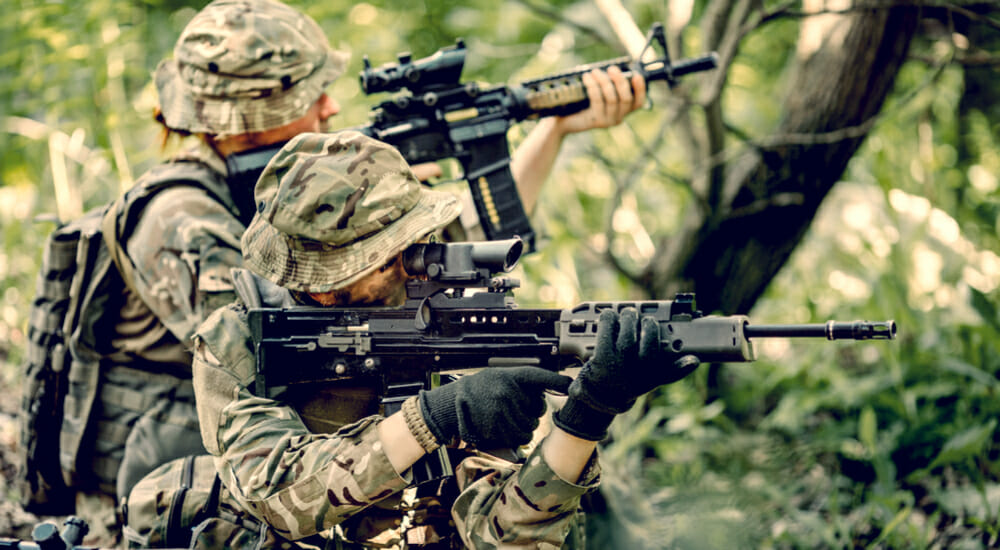 The British Special Air Service, or SAS, is the effective forerunner for American Special Forces. They rival American operators in skill and toughness.

The elite SAS was founded in 1941, for the North Africa campaign against the Nazis. This was six months prior to the Americans entering the war. Two years later, in 1943, began what we know today as the Navy SEALs. When they began, the SEALs were known as the Naval Combat Demolition Unit, or NCDU, and worked exclusive in the water.

Then President “Feminizer” Obama was elected and things began to change – for the worse. The era of politically correct military social experimentation was on. And what a perfect group of test subjects – ones who can’t quit or merely walk out. Soldiers, sailors, airman and Marines were trapped and forced to put up with new military P.C. directives.

Things went from bad to worse when Ash Carter, a joke of a Secretary of Defense, was appointed in 2015. Soon after, he announced that women would be given the opportunity to join the American Special Forces community. Predictably the community went nuts. They were/are not happy.

Now it has been announced that the Brits are following suit and granting the opportunity for women to join the SAS starting in 2019.

Like our elite special operators, it is also darned near impossible for the average MAN to even dream of measuring up to SAS standards.

Most SAS applicants come from other British Special Forces units, like the Parachute Regiment or the Royal Marines Commandos. Even then, SAS standards are so high that they maintain about a 90% drop-out rate. Most are already tough guys, and even they cannot make the grade. Just the process of selection to become a SAS operator is five grueling months of training and testing.

An example of just one of these tests is called “Endurance.” It is 40 miles long and must be completed without any breaks. And as you can imagine, the miles are NOT along flat paved roads. Troops carry a 60lb ruck, a rifle and a full water bottle – and are timed. This is done after already completing weeks of rigorous training. Try it – see how far you get.

After one has successfully completed the first five months, the few that remain are then shipped off to the jungles of Brunei for more training. If you survive that, you become a SAS operator.

How on Earth does the British political class expect women to measure up? As you would expect. Just as the Obama administration did, the Brits will allow women to cheat the established system of selection.

Naturally they are not describing it as such. A British government source explained that, “There is a determination to get women into the Special Forces. There will be changes to the selection of women but it is not about lowering standards — it’s about leveling the playing field.

In other words – it is about lowering the standards. And does this sound at all familiar?

You may recall that we already experienced this embarrassment in 2015, when the first women attended Army Ranger School. The fix was in ahead of time, as it was reported that, “officials at the highest levels of the Army had already decided failure was not an option. ‘A woman will graduate Ranger School,’ a general told shocked subordinates while preparing for the first females to attend a ‘gender integrated assessment’ of the grueling combat leadership course.”

The general was quoted as saying that, “At least one will get through.” And two did, but only after being allowed several course run-throughs prior to the start, lighter duty and the ability to repeat cycles over and over until they passed – as well and many other do-overs. The men get no do-overs. They are one and done.

It was a travesty, and the Brits will find this silly feminist experiment to be the same failure as the Americans.