Breaking News! London Rocked by Yet Another Terrorist Attack! 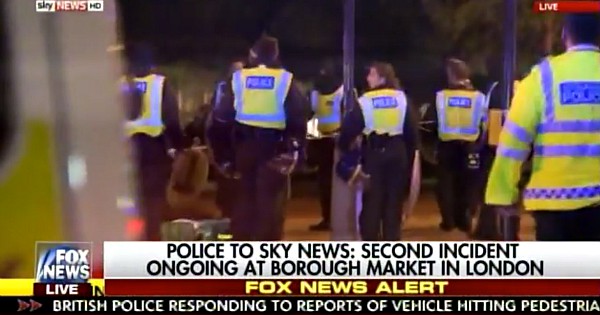 Sadly, it seems that another terror attack has struck London this evening.

We are dealing with an incident on #LondonBridge, when we have more information we will update this twitter feed.

The first part of the attack seems to have been when a van, moving at full speed drove up onto a crowded evening sidewalk, hitting multiple pedestrians. Several people were killed and many others injured.

A witness told Sky News what he saw driving into the area:

“It was about 10.15pm I was in the back of an Uber cab driving over London Bridge…there was somebody down on the pavement with a small crowd around them clearly very concerned.

“It looked like someone had collapsed. We drove a bit further and noticed there was another person on the right hand side of the bridge who was also not on the pavement but in the road itself.

“The penny dropped something quite serious was happening.

“Suddenly the traffic came to standstill. The driver said something bad is happening here.

“We could hear sirens coming and the suddenly ahead of us we noticed another casualty in the road.”

Around the same time but several blocks away 2-3 men were attacking innocent pedestrians, sending terrified Brits running in panic.

The UK’s the Sun says that multiple witnesses reported that at least 2 or 3 men were stabbing innocent bystanders:

MULTIPLE people have been killed after a van has mowed down pedestrians in central London before victims were stabbed and shots were fired – amid a second ‘attack’ at nearby Borough Market which armed police are responding to.

Terrified people have fled the London Bridge area while one officer is said to have been “seriously injured” as “multiple” casualties have been confirmed by British Transport Police.

Eye witnesses confirm that several bodies are “strewn on the ground” and people are receiving CPR after being randomly stabbed by “two to three men armed 12 inch long knives.”