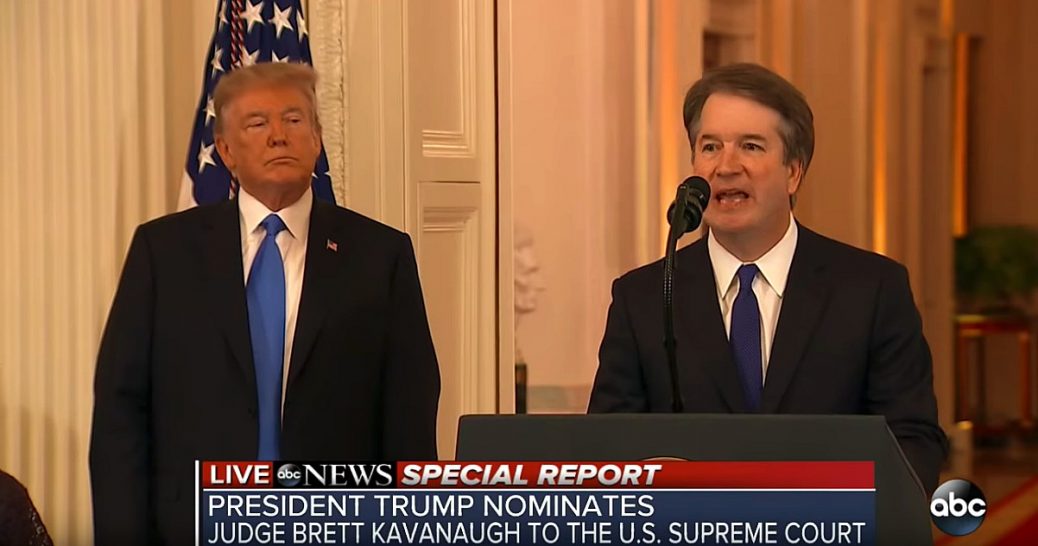 Despite screaming women in the gallery attempting to disrupt the voting process for Judge Brett Kavanaugh, the Senate with a narrow margin of 48-50, confirmed Judge Kavanaugh to a seat on the Supreme Court.

He was the very best of the best nominees that could have been found for this prestigious appointment. He excelled for 12 years as a Judge on the D.C. Circuit Court of Appeals without one negative. He also treated everyone around him with dignity and many testified to that description.  All who knew him at Harvard had nothing but praise for him. The only people who do not like him are Democrats.

The problem? He is a constitutionalist who would rule properly on all cases involving America. He would uphold the law as established by the Founding Fathers. This is part of ‘Making America Great Again.’ He could never be bought or influenced to compromise his duty to America as a Supreme Court Justice.

This was the nastiest confirmation process in history. The lies, innuendos barreling into downright character assassination was deplorable which gives new meaning to Hillary’s definition of “the Deplorable’s. At last, we have the definition.

The dissenting Soros Communist Democrats, armed with cargo-ship loads of misrepresentations, immediately following President Trump’s announcement, began the attempt to sway patriots away from the deciding vote ever seen in history.

Senator Chuck Schumer made an incredible speech, before the vote, consisting of lies in every sentence. Not a figure of speech, mind you, but actual detected LIES. The only time a Demoncrat does not lie is when his or her lips are not moving.

The confirmation of Judge Brett Kavanaugh makes America stronger. This is why the Soros army tried to derail it. The mobs Soros paid to demonstrate everywhere in D.C., even into the Capitol Building itself, where they blocked senator’s offices making it impossible for them to get into their own workspaces and harassing every senator who walked by.

Soros’ idiots also demonstrated in front of the homes of senators causing great havoc. And isn’t it said that a man’s home is his castle? Not as long as Soros Democrats are in the vicinity. They hired a woman with a little-girl squeaky voice to assert incredible charges that Kavanaugh, who could not resist her, made improper advances. Yea, sure.

This was all the Soros Dems needed to declare him guilty of the charge even though not one person would bear witness to it…..people that had been named by the accuser all said they knew nothing about it. Yet that did not matter. The Dems would consider any conservative guilty with strictly an accusation by someone, no matter how daffy. They could say a prominent conservative was seen raping a penguin on 5th Avenue and the Dems would immediately verify it.

This is why one should NEVER…EVER vote for a Democrat for anything. They all want to destroy America and put us under a Communist dictatorship. They are so evil they must be Satan’s minions.

However, I believe God intervened to put Judge Kavanaugh in place the same as he put President Trump in place. Much prayer came from all corners. And it is also believed that God is indeed, giving America one more chance.

CONGRATULATIONS to a great family man, a man of great intellect and legal skills who is now, JUSTICE Brett Kavanaugh.