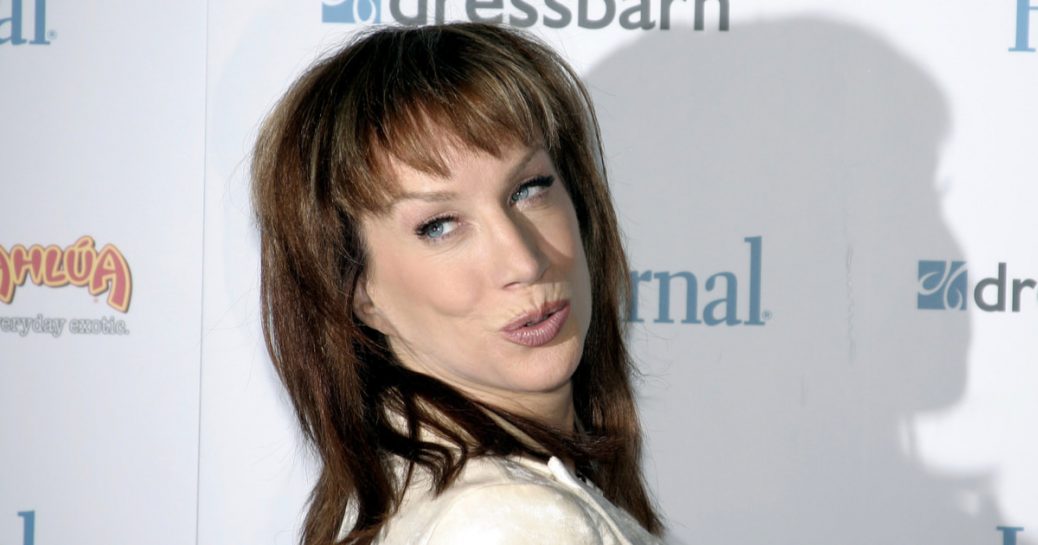 Is the abhorrent image of a “blood-soaked decapitated head” resembling President Donald Trump “art”? This visual horror is suspended in the air invoking the classic image of Perseus holding Gorgon Medusa’s head. It’s the kind of ugly propaganda one would expect from a proponent of radical Islamic terror, not self-proclaimed “D-list” comedienne Kathy Griffin, 56. This unapologetic liberal—an outspoken Trump critic—obviously subscribes to Irish dramatist Oscar Wilde’s axiom: “There is only one thing in life worse than being talked about, and that is not being talked about.” Among those taking notice is the Secret Service, charged with evaluating all perceived threats to any U.S. president. One of the agency’s tweeted responses: Threats made against @SecretService protectees receive the highest priority of all of our investigations. #ProtectionNeverRests That’s territory well beyond the controversial. That’s an idiotic foray into the foolhardy.

As Griffin’s now on the Secret Service’s radar, she’s been on the fringe of Hollywood celebrity for a long time. For context, she’s a less successful contemporary of has-been pop singer Madonna. Like the middle-aged “Material Girl” (most famous for her recent public utterance, “Yes, I have thought an awful lot about blowing up the White House.”), Ms. Griffin’s attention-grabbing militancy has utterly overshadowed her considerable comedic talent. That ability has resulted in notable past successes: she’s won two Emmy Awards for her reality TV show “My Life on the D-List” and is one of only three women to win solo Grammy Awards for comedy. What she’s known for today is this odious, anti-American political antic.

These days it’s a rarity for the left and right to agree on anything. Yet, both sides widely condemned Ms. Griffin’s publicity stunt. While morally challenged Hillary Clinton has remained tellingly silent, even her daughter Chelsea tweeted, “This is vile and wrong. It is never funny to joke about killing a president.” For comparison, let’s consider an unthinkable scenario. What if vanquished Hillary had won the 2016 presidential election and a famous conservative had held her “blood-drenched severed head” in effigy? Better still, imagine the crazed and violent reaction of leftist political radicals if the likeness had depicted a “decapitated Obama”? Thus, how could the measure of Ms. Griffin’s outrage be made any more plain?

How could this public figure—this veteran of naked self-promotion—not predict the thunderous backlash? (President Trump being defended—by any Democrat, for any reason—is disorienting stuff indeed!) So far Ms. Griffin received little more than a few slaps on the wrist. Per Variety Magazine, she’s been fired from her ten-year gig as the co-host of CNN’s annual New Year’s Eve program with anchor Anderson Cooper. Likewise, a couple venues on her Celebrity Run-In Tour in Albuquerque, NM and Grass Valley, CA have canceled scheduled appearances. Yet, counterbalance a few days of lost work with the media bonanza of numerous internet stories—and blurbs on the nightly news!

In her defense, Ms. Griffin (unlike Madonna) quickly apologized on Tuesday for the uproar she caused. Naturally, this provocateur enjoys First Amendment protections for her inflaming shenanigans. And as her comedic signature is known for brutal honesty, perhaps her posted mea culpa is genuine. Still, whether that’s true or not, isn’t really the point: TMZ reported Wednesday that President Trump’s understandably panicked 11-year-old son Barron thought the horrifying televised image featuring Griffin was real.

How could this innocent know any better? Unfortunately, he was in the family’s New York City penthouse with first lady Melania Trump, not in the White House. In any case, she released a statement that goes right to the heart of unhinged progressives’ thoughtless tactics:

[That photo] makes you wonder about the mental health of the person who did it. As a mother, a wife, and a human being, that photo is very disturbing. When you consider some of the atrocities happening in the world today, a photo opportunity like this is simply wrong.”

To that end, per Fox News, one is automatically reminded of 119 wounded and 22 killed, including many children, at an Ariana Grande concert in Manchester on May 22nd. Did the world really need the made-up gore Ms. Griffin peddled?

Unfairly, this reality TV star has benefited from Barron’s suffering—and the presidential family’s collective disgust. The fact remains that Kathy Griffin’s gone viral in a way that the infamous Oscar Wilde of the 19th century could not fathom. Hence, this social media firestorm is a good effort for the woman whose shtick includes such gems as, “Well, I’ve been trying to sleep my way to the middle for my whole career.” Although said in jest, Ms. Griffin’s self-serving ploy of “cutting edge” pop culture infamy is accomplished.
Whatever the ultimate consequences—good or bad—this agitator’s made her bed. A raunchy bed she alone must sleep in.