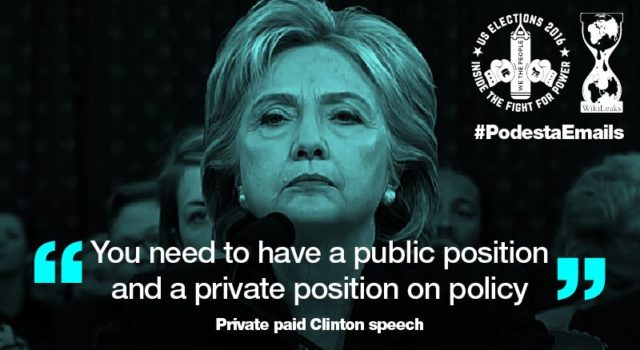 In leaked emails which include remarks made by Hillary Clinton in private speeches to investment bankers throughout 2014 and 2015, the 2016 Democratic candidate is revealed to be the anti-American, Socialist, Elitist that the American people have long claimed her to be. As reported by the Intercept:

“The excerpts are revealed in an email from Tony Carrk, the research director of the Clinton campaign, to John Podesta, the campaign chairman, and other top campaign officials. Carrk, who did not respond to a request for comment, highlighted in the memo the most politically damaging quotes from each paid speech, under headers including “CLINTON ADMITS SHE IS OUT OF TOUCH,” “CLINTON SAYS YOU NEED TO HAVE A PRIVATE AND PUBLIC POSITION ON POLICY,” and “CLINTON REMARKS ARE PRO KEYSTONE AND PRO GLOBAL TRADE.”

Copies of each leaked speech are included below as links and are organized by topic:

Hillary Clinton in paid speech to Wall Street:  “I’m kind of far removed from the struggles of the middle class.”

Hillary Clinton in second paid speech to private bankers: “You need to have a public position and a private position on policy. If everybody’s watching, you know, all of the back room discussions and the deals, you know, then people get a little nervous, to say the least.”

Hillary Clinton in third paid speech to investment bankers:  “My dream is a hemispheric common market, with open trade and open borders.”

Hillary Clinton in fourth paid speech to Wall Street: “When I got to State it was still against the rules to have access to a Blackberry.”

Hillary Clinton in fifth paid speech to Wall Street: “Sanders once wrote that women fantasize about “being raped by three men simultaneously.”

“The discussions were an opportunity for Clinton to speak candidly about policy, politics, and her approach to governing.

Touching on her view of developing financial regulations, Clinton declared to a crowd of Goldman Sachs bankers that in order to “figure out what works,” the “people that know the industry better than anybody are the people who work in the industry.”

At the Goldman Sachs Builders and Innovators Summit, Clinton responded to a question from chief executive Lloyd Blankfein, who quipped that you “go to Washington” to “make a small fortune.” Clinton agreed with the comment and complained about ethics rules that require officials to divest from certain assets before entering government. “There is such a bias against people who have led successful and/or complicated lives,” Clinton said.

At a 2013 speech for Morgan Stanley on April 18, Clinton praised the Simpson-Bowles deficit reduction plan — which would reduce corporate tax rates while raising the Social Security age. “But Simpson-Bowles — and I know you heard from Erskine earlier today — put forth the right framework. Namely, we have to restrain spending, we have to have adequate revenues, and we have to incentivize growth. It’s a three-part formula,” she said.

The Intercept was the first media outlet to ask Clinton directly if she would release the transcripts of her paid speeches to Goldman Sachs. When approached at an event in Manchester, New Hampshire, Clinton laughed off the question.”

If you’re interested in sifting through all 2050 emails released this evening by Wikileaks, they are available through the link below. Interestingly, Wikileaks affirmed this evening that this release is NOT the “October surprise” which concerns Hillary – they indicated further Clinton revelations will be released in the next two weeks. While the mainstream media concerns itself with Mr. Trump’s sophomoric locker room conversation, released today as well, these revelations need to be shared far and wide as Hillary has finally been revealed to be the anti-American Socialist we have long suspected her to be. 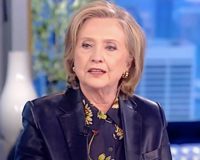