Bombshell! Leftwing Media Matters President a ‘Bigot’ and a ‘Racist’! 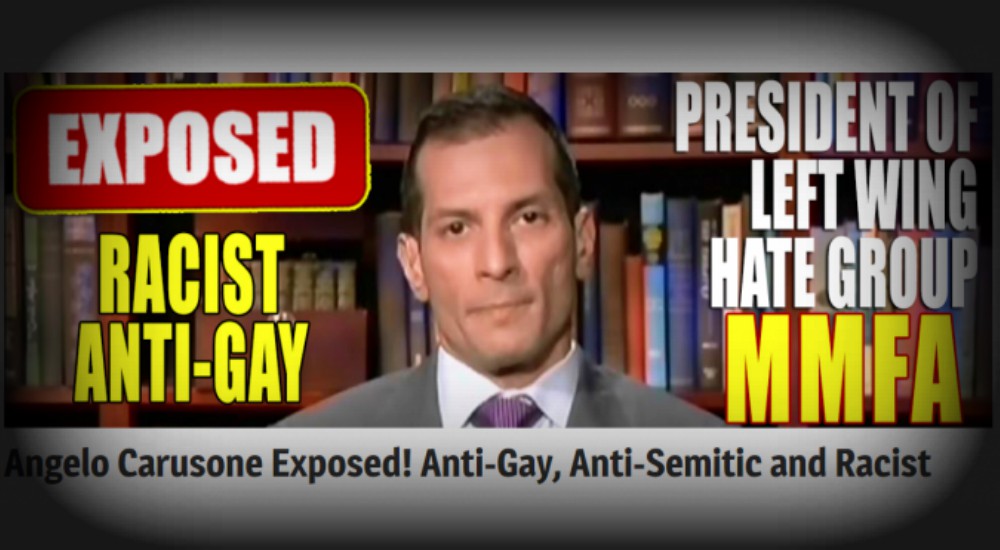 In response, Carlson chose to say that he wouldn’t be backing down or apologizing for comments he made more than 15 years ago.

The media decided to jump on the anti-Carlson bandwagon, attacking him at every turn while breathlessly lauding Media Matters president, Angelo Carusone, for uncovering the recording.

However, none of these media types have ever chided Carusone for his similarly ugly commentary from more recently!

The Daily Caller has more:

Carusone posted a lengthy diatribe in November 2005 about a Bangladeshi man who was robbed by “a gang of transvestites,” as Carusone described it. Carusone was offended that the gang was described as “attractive” in an article.

“Did you notice the word attractive? What the f**k is that doing in there? Is the write[r] a tranny lover too? Or, perhaps he’s trying to justify how these trannies tricked this Bangladeshi in the first place? Look man, we don’t need to know whether or not they were attractive. The f**king guy was Bangladeshi,” Carusone wrote. “And while we’re out, what the hell was he doing with $7,300 worth of stuff. The guy’s Banladeshi! [sic]”…

In another post that same month, Carusone downplayed a male basketball coach’s alleged sexual and physical abuse of his female players, adding, “lighten up Japs,” using what is considered an ethnic slur.

Carlson used his Fox News shot to unmask Carusone for the bigot, anti-Semite, and racist that he is:

Chris Hayes is an anchor over on MSNBC. The one with the glasses. [STILL PHOTO HERE] Haye’s political views aren’t very interesting: Cringing hipster sensitivity, burnished with low-grade academic buzzwords. Pretty banal. But Hayes always seemed like a decent guy personally. He didn’t seem like a hater. It was hard to imagine him promoting open racism and anti-semitism. Or at least it was, until the other night. That’s when Hayes invited a man called Angelo Carusone onto his show. Carusone runs Media Matters. Almost every day, he issues outraged press releases accusing other people of bigotry. And yet, because everything is irony, Carusone is himself an enthusiastic bigot. We know this because he’s written about it extensively.

For years, Carusone maintained a racist blog. One post, entitled quote, “Tranny Paradise,” addressed a crime story from Thailand. A Bangladeshi man had been robbed and assaulted by a group of male prostitutes dressed as women. Carusone objected to the idea this was even newsworthy, and ridiculed south Asians as inherently ugly and poor. Quote: “Is the writer a tranny lover too? Or, perhaps he’s trying to justify how these trannies tricked this Bangladeshi in the first place? Look man, we don’t need to know whether or not they were attractive. The f-ing guy was Bangladeshi…. What the hell was he doing with $7,300 worth of stuff? The guy’s Bangladeshi!”

In another post, Carusone described how a male coach at a Japanese high school had sexually abused female players. People in Japan were understandably horrified by this. Carusone was not. His advice: quote, “lighten up, Japs.” Later that same month, Carusone, by now in a frenzy of unapologetic racism, heaped praise on a former Ku Klux Klan leader.

In still another post from the same period, Carusone described a Jewish man as being handsome, quote, “despite his Jewry.” Carusone didn’t like the man’s political views, but attributed them to quote, “his possession of several bags of Jewish gold.”

Jewish gold. According to Angelo Carusone, Jewish gold is a problem. Media Matters probably ought to to issue a press release about this. They’ve done a lot more for a lot less. Yet somehow Chris Hayes managed to pretend that none of it ever happened. Hayes never mentioned the Jewish gold. He never said a word about the Japs, or the trannies, or the Klan, or even those criminal Bangladeshis who deserve what they get, no matter what the tranny lovers say. Instead Hayes gave cover to Carusone’s bigotry and anti-Semitism. Amazingly, he even directed his viewers to Carusone’s website:

HAYES: Angelo Carusone, of course, all that could be found at Media Matters Web site so you can listen, the full clips, get the full context as all there.

Pretty remarkable. If a guy with a history of ranting about “Jewish gold” came on your show, would you challenge him on it? How could you not? You’d feel morally obligated. Hayes didn’t. Tells you a lot.

To be clear, we’re not calling for either of these people to be imprisoned or executed, or even fired from their high-paying jobs. We’re not planning to organize an advertiser boycott. We won’t picket their offices with bullhorns. We won’t attack their children. But we do think you should know what they’re really like. In Hayes’s case, it’s a little depressing to see. Turns out you never really never know who people are.