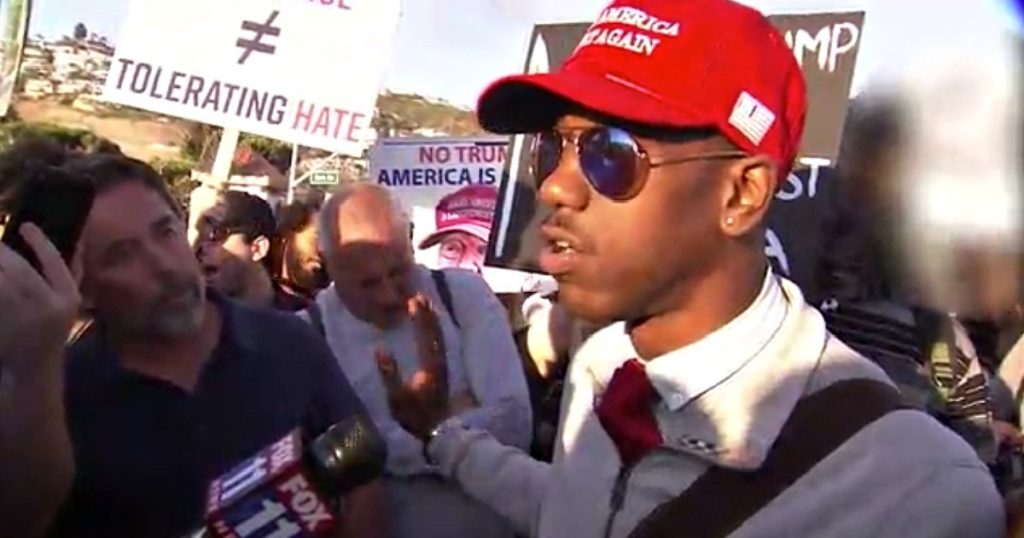 R.C. Maxwell is one brave man.

Recently he attended a pro-Trump rally in California and was “lucky” enough to be assaulted not once, but twice by leftist protesters.

On his way in to the event Maxwell was being interviewed when a bunch of leftists surrounded him, began mocking him, and even pushed him for his support of President Trump.

On his way out Maxwell attempted to engage protesters in conversation about why they feel so agitated by the President. What did he get for his efforts? More mockery, more foul language, and finally a coward snuck up behind him and surprised him with a punch to the face.

In the days following the event you would have thought that the media furor would have been terrrific. Sadly, Maxwell is a black man who doesn’t fit the narrative. Because he wasn’t attacked by a Trumps supporter, the media simply ignored his attack.

Which shouldn’t surprise us… but it still kind of does.

Maxwell spoke of the attack and the aftermath with Freedomainradio’s Stefan Molyneux:

R.C. MAXWELL: My story is one [experienced by] a lot of conservatives at these rally events. They’re becoming extremely dangerous. We are vastly outnumbered, and that is because the mainstream media is emboldening people to hate Trump supporters. Everyone who has seen the video — I never wanted to gain notoriety by being punched, but however, I’m completely okay with it, because it shows the violent tendencies of these counter-protesters, who are always portrayed as peaceful by the mainstream media.

STEFAN MOLYNEAX: And your goal was to engage in a fruitful and productive dialogue– which, of course, is the essence of civiliztion. So, give me a blow by blow of how it played out.

MAXWELL: The blow by blow is simple. On my way to the other side, I was harassed by people who knew who I was, and they were imploring me to put on my MAGA [Make America Great Again] hat… obviously I had it off because I didn’t want to be that arrogant and brash with the other side. I specifically wanted to talk to them as a black man who grew up in a lot of the areas in the black community… I was quickly encircled by Antifa and these counter protesters, yelling racialized attacks (sellout, Uncle Tom, words I hear frequently) while I was trying to reason with the other side.

I tried to explain to them what illegal immigration has done to the black community, and this is why I feel the way I do, and before I could really have any dialogue with the other side, their emotions got the better of them. I was attacked multiple times, sucker-punched, and obviously I was pepper sprayed, choked, and tackled.

So hopefully this is a lesson going forward about the dangers of playing up the notion that conservatives are racist Nazis, because clearly I am not.

STEFAN MOLYNEAUX: Obviously, your political orientation and your race gooes against a particular political narrative. You are, in a sense, a double threat. Now, you couldn’t get your message across to the… brutes… but what is it that you would like people to hear? … What is the speech that you wanted to give to the leftist… about the black community, illegal immigration, and other issues.

MAXWELL: The speech I wanted to give was… a more legitimate truthful narrative about Trump supporters.

You’ve got to remember, Trump polled about a third of Hispanics, and he also polled more African-Americans than the previous two Republican candidates. So I want to explain why that is.

And also about Chicago, and the violence that black families face there, is something that doesn’t get shown on the media. The message I was trying to send is: Look, Trump supporters aren’t xenophobic, I’m not xenophobic, I speak a little bit of Spanish, however, that doesn’t mean that I don’t see the negative consequences of illegal immigration, and some of the other Trump administration items.

My goal was really just to engage in dialogue and break down some of the barriers that are leading to the increase in political violence we are seeing. I think because, specifically, I am a double edged sword to liberals, they don’t want to listen to me. They’d rather just be at a loss for words, and then use violence.