Billionaires Ease Their Guilt by “Investing” in Climate Change Myth 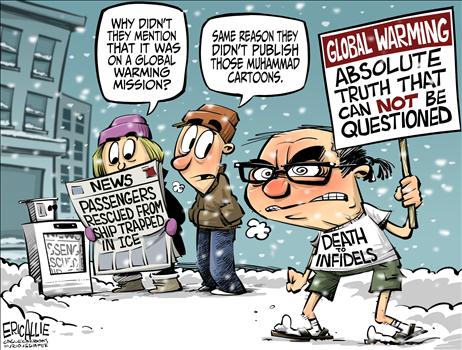 Just yesterday the Huffington Post gleefully announced that Bill Gates, the world’s richest man, with a net worth of $87.4 billion, is combining his vast resources with 20 or more other billionaires to fight…what else…climate change.

I may have misspoken when I said he was going to combine his “vast resources.” He’s not really. He and 20 or so other fat-cats have established the “Breakthrough Energy Ventures fund.”

Combined these 20 wildly wealthy individuals will chip in a total of $1 billion, “to build companies that will help deliver the next generation of reliable, affordable, and emissions-free energy to the world,” Gates said. A bit of a paltry figure considering their cumulative wealth is in excess of $170 billion. But still, a billion dollars is nothing to sneeze at. Oh, and the initiative plans to invest in “green energy” over 20 years.

The HuffPo writes that, “The fund will focus its investments on projects relating to a number of clean energy issues such as carbon emission reduction and energy generation and storage.” Gates added that, “In addition to mitigating climate change, affordable clean energy will help fight poverty.”

I honestly think these guys are so wealthy that they don’t know what to do with the money. They feel guilty about having so much that they go looking for causes. For whatever reason, the bogus claim of global warming seems to top the list of causes to alleviate the guilt.

Recall when I said a billion dollars is a paltry figure, but is still nothing to sneeze at? Well, the former is right and latter, wrong. In

the world of planet-wide climate change expenditures, $1 billion is barely a rounding error. That billion will do diddly squat.

According to Climate Policy Intitiative.org, global investment in climate change stood at “$359 billion in 2012. Climate investment was split almost evenly between developed and developing countries, which received $177 billion and $182 billion respectively.”

So we see that Gates’s $1 billion fund will not mean beans, relative to the hundreds of billions floating around the climate change world. But it’s even worse than that.

In 2015, Climate Change Business Journal (CCBJ), a climate change business consulting firm, concluded that the business of climate change is far more than $359 billion. It “calculated that the annual cost of the global warming industry is $1.5 trillion.” That’s over $4 billion per day worldwide, and $3 billion more than the Gates fund has pledged over 20 years.

In fact it’s more spent in one year on a hoax than the entire net worth of the 50 wealthiest people on Earth at $1.46 trillion.

Rest assured that no one will do an honest follow-up or assessment on the results of the “Breakthrough Energy Ventures fund.” It is enough to know that’s Gates and other guilty billionaires are at least trying, as the rest of us are busy ruining the planet. That’s really all that counts in the liberal world – isn’t it.