Bill Clinton is Right: Obamacare is the “Craziest” Thing in the World 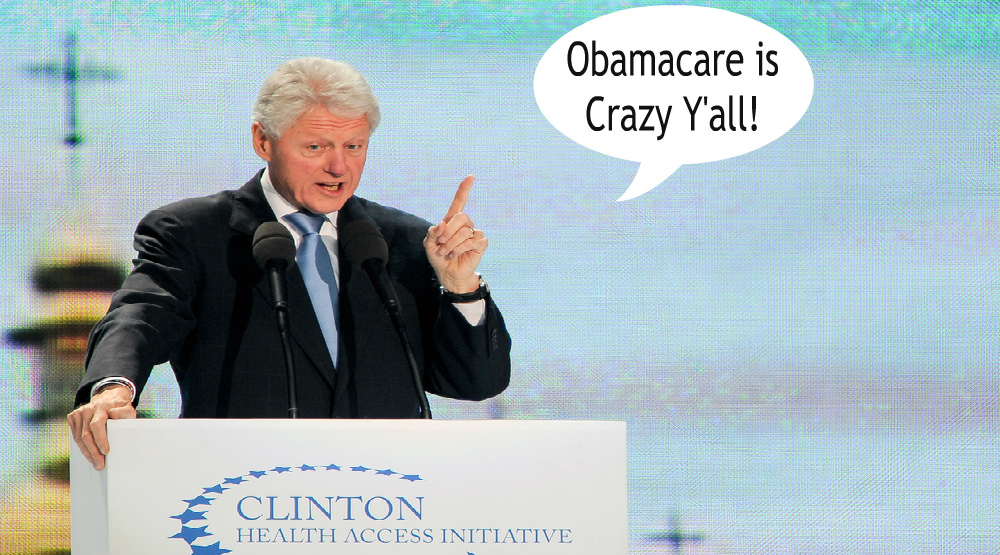 Folks have glossed over the 2nd Presidential Debate discussion on Obamacare completely; probably because it lacked the salacious aspect that many have focused upon lately.  If there’s a competition between salient and salacious, the American people will, sadly, focus on salacious all day long.  I want to focus on the Obamacare aspect, however, because I have been an insurance regulator, a health insurance company executive, and a C-Suite executive and guiding board member for several companies that have created solutions to both lower managed care costs while increasing quality outcomes.  It’s what I’ve done for the past 25 years.

If I’ve said it once, I’ve said it a thousand times: policy matters.  That being said, nothing is a better indicator of future policy than examining the outcome of past policy.  The oxymoronic Affordable Care Act is a prime example of flawed policy and should therefore not be glossed over.

Here are the benefits that Clinton touted from Obamacare during the debate:

The reality is that the ACA has removed a fair chunk of medical underwriting.  In short, the touted benefits are exactly the things that have led to spiraling costs.  A knock-out punch from Trump would have been: “You say that you want to tweak the system and then you tout the benefits of the system.  You then go on to list 4 specific items as ‘benefits’ when the items that you listed actually contributed to breaking the system.  You can’t have it both ways.  You can’t force companies to take on higher uncompensated risks and then demonize the companies when the costs go up in lockstep with the increased risks.  If you don’t understand what you did through legislation to break the system, what makes you qualified to fix it?”

Underwriting allows insurance companies to price policies based on actuarial risk exposure; based on what history has shown.  If you can’t have an element of pre-ex, it costs the system more.  If you remove lifetime limits, it costs more.  If women of a certain age use more medical services than men, it makes actuarial sense to say that it costs more to insure them.  It’s not discriminatory to charge somebody more who utilizes more resources, it’s simple cost allocation…it’s why traditional insurance underwriting was originally banded using age / sex categories for pricing. Such age / sex determined pricing provides predictability with pricing, as do alternative methodologies.  If dependents are carried on family policies for longer, the policy will cost more in terms of claims exposure.  It’s not only scientific, it’s sort of common sense-based.  You see, there’s basically a scientific formula for cost determination.  You can’t disregard actuarial science, throw more costs and risks into a single bucket, wave a magic political wand, and expect for costs to plummet.  In addition to rate bands (age / sex based pricing), there’s also community rating, adjusted community rating, experience rating, etc.’ each rating methodology with its own extent of precision.  But, any underwriting criteria will be upset by changing core dynamics of coverage limits.

I’ll take it one step further.  Actuarial science is very exact; more exact than weather science at this stage of the game.  Why is it that if you don’t believe that climate change (previously called global warming, until the polar ice caps didn’t all melt away) is a phenomenon primarily caused by mankind, you are a “denier;”  BUT, you can completely throw actuarial science out the window and claim to be a problem solver with regard to health care coverage?  Not only that; but, how can you create a problem and then tout that you’re the best one to fix it?

The other knock-out punch that Trump missed is this:  “Anderson Cooper, you said yourself, as part of the question, ‘Premiums have gone up. Deductibles have gone up. Copays have gone up. Prescriptions have gone up. And the coverage has gone down.’  If both premiums and deductibles have gone up, let’s call those costs what they really are: extra middle-class taxes!  A system has been created that you need to buy into or face a tax; and, the system that you’re being forced into costs more.  Let’s face it, those increased premiums and the increased deductibles and increased pharmacy costs are all TAXES.  If you are charged more and then get less coverage, that’s the worst kind of tax that anybody can draw up or design.  The Democrats have created the biggest tax scam ever and now they don’t want it repealed or replaced.  Of course they don’t.   When is the last time that a party tried to control 17%+ of the GDP only to decide to give up that power?  When is the last time that a Democrat repealed a massive tax?  When is the last time that anything akin to an entitlement program has been unwound?”

To increase accessibility you really need to lower costs without compromising quality.  There is massive fraud, waste, and abuse in the healthcare system.  There is abuse with the Rx component, especially by specialty PBMs (pharmacy benefit administrators).  Physician self-referral remains a problem despite the Stark Law.  Medical devices can vary in costs by a factor of 8x ore more depending on the distribution channels that they have flowed through.  Medical biologics costs have spiraled, etc.  Rather than fixing a system to increase accessibility as step number one, we’ve broken the system more while retaining the original underlying cost overrun problems.  Nice job!

In the end, it will be private solutions that bail out the debacle created by the government; mark my words.  If you want a glimpse of government run, soup-to-nuts healthcare, look no further than the V.A.  That’s what happens when you have a single payor controlling the payments as well as the resources.  It’s the ghost of healthcare future if Democrats continue to fix the system that they just recently “fixed.”  In the words of Bill Clinton, Obamacare is “the craziest thing in the world.”