“We Need to Clean This Up”! Obama Lied About Hillary’s Email Scandal and Bribed the Investigation! 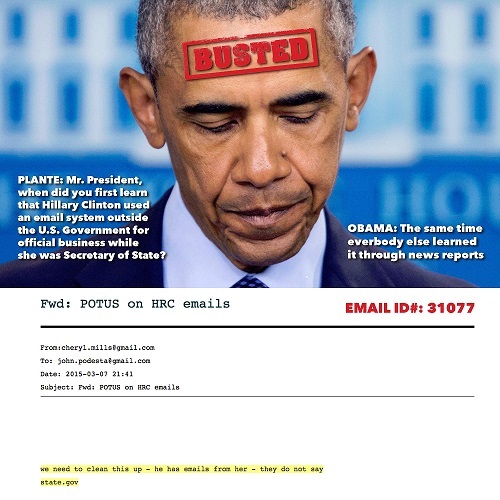 In what is the highest-reaching revelation from Wikileaks, President Barack Obama lied to the American people when detailing his knowledge of Hillary Clinton’s private email server and further, evidence indicates he bribed the FBI investigation.

““Jen you probably have more on this but it looks like POTUS just said he found out HRC was using her personal email when he saw it in the news.”

The email is then forwarded to John Podesta from Hillary’s Chief of Staff who wrote:

“We need to clean this up – he has emails from her – they do not say state.gov

The emails can be seen in their original form here: https://wikileaks.org/podesta-emails/emailid/31077#efmAABABT

The most disturbing thing about this email chain is the indication that Obama knew about Clinton’s private email accounts, corresponded with her on it often, and lied about it when asked. When interviewed about it by CBS News, Obama claimed he didn’t know anything about a private email address of Hillary’s and that he had learned about her private server “like everyone else”. Sure Mr. President, if everyone else had been emailing her on that address.

When coupled with the fact that on the same exact day that Cheryl Mills told John Podesta they needed to “clean up” the email scandal, Virginia Governor and Hillary surrogate Terry McCauliffe met with the FBI agent who oversaw the Clinton email case and his wife and promised financial support (500k) if she ran for office and there is a clear path of Obama lying and then doing exactly what the email indicated – they “cleaned” it up with a 500k bribe.

These revelations are the most damning yet and indicate the corruption that has permeated Hillary Clinton’s campaign has deep roots at the highest levels of the liberal, Marxist White House led by Barack Obama.