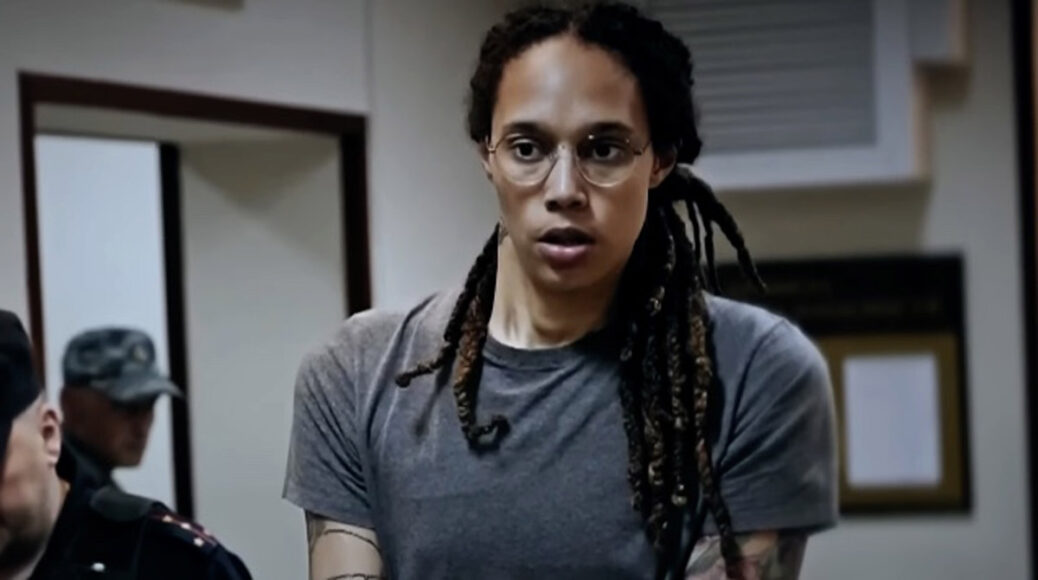 The Biden administration was excited Thursday to announce that it had reached a deal with Russia to free WNBA basketball player Brittney Griner from a Russian jail, but critics blasted Biden for giving up a dangerous Russian arms dealer in exchange for a mere basketball player, and leaving a U.S. Marine languishing in a Russian jail on top of it.

Griner was arrested in February in a Moscow airport and charged with drug trafficking for having cannabis-infused vape cartridges in her luggage as she was on her way out of the country. By August she was convicted of the charges and sentenced to 9-1/2 years in a Russian prison.

A month ago, she was moved to a harsh Russian forced labor camp where Russian authorities expected her to serve the rest of her nine-years in prison.

Griner is also a major anti-American who has protested against the country for years.

In July of 2020, Griner told the sports media, “I honestly feel we should not play the national anthem during our season. I think we should take that much of a stand.”

Even if the league decided to play the anthem, Griner said she was going to stand with others against the country anyway.

“I’m going to protest regardless. I’m not going to be out there for the national anthem,” she said. “If the league continues to want to play it, that’s fine. It will be all season long, I’ll not be out there. I feel like more are going to probably do the same thing. I can only speak for myself.”

The Biden administration claimed throughout this year that it was making overtures to the Russians and trying to get Griner free from her sentence. Finally, after months of inaction, a deal was struck.

But that deal is spurring much criticism since the Russians got a dangerous arms dealer back while all America got was a basketball player. Worse, the prisoner swap notably left behind Paul Whelan, an American and former Marine jailed in Russia in 2018 under purported “espionage” charges. Whelan was sentenced to 16 years.

Twitter exploded with condemnation of the Biden administration for this lopsided prisoner exchange and for leaving a Marine behind while saving a mere basketball player:

Guess which one Biden traded a terrorist to free?

She’s a black lesbian who hates America. Biden is just bringing another voter back home. https://t.co/2XL3xqOCWL

Brittney Griner: "I'm going to protest regardless, I'm not going to be out there for the National Anthem. If the league continues to want to play it, that's fine. It will be all season long, I'll not be out there"

Pro Tip: I highly suggest you be out there & STAND!!

David Whelan, brother of imprisoned Paul Whelan: "How do you continue to survive,day after day,when you know that your government has failed twice to free you from a foreign prison? I can't imagine he retains any hope that a government will negotiate his freedom at this point…" https://t.co/Skq4hwHmnQ

Brittney Griner being released in exchange for a convicted arms dealer.

Victor Bout, the man traded for Brittney Griner, was last found guilty, 11 years ago, of conspiring to sell millions of dollars worth of weapons to terrorists in Colombia to assist them in killing Americans.

This is who Biden swapped for America hating lowlife Brittney Griner: pic.twitter.com/Uubnoku8Ld

Viktor Bout for Brittany Griner … and only Brittany Griner? That's great news for Griner, but how did she get priority over Paul Whelan, who's been held since 2018?

BREAKING: Griner swapped for Russian arms dealer, on way back to UShttps://t.co/PdfjorIT1Y

When you live in a country supposedly at very important proxy war with Russia via Ukraine, but we gave the Russians back one of their arms merchants for a woke athlete 99% of Americans couldn't pick out of a police lineup. pic.twitter.com/6khGPRtSgy

Trading Viktor Bout for Brittney Griner is like trading Tom Brady for Bobby Boucher 😂😂😂😂 . Who won that trade !?!? pic.twitter.com/42GcJimfAz

We traded a Russian Arms dealer Viktor Bout, known as the "Merchant of Death" to Russia for the release Brittney Griner…

2) US Marine Paul Whelan is still imprisoned in Russia.

We just traded “The Merchant of Death” Viktor Bout, a man who sold arms to warlords, for Brittney Griner, a WNBA player.

This may be the worst trade deal in history.

The #BrittneyGriner trade is Biden’s version of Obama’s Bergdahl trade. In both cases America got back a nasty anti-American leftist in exchange for some really bad dudes likely to continue to do harm to this country. This is the Democrat playbook!

America-hating pothead Brittney Griner is being prisoner swapped back to the US for the most dangerous man in the World, Viktor Bout, the Merchant of Death.

Why would Biden do this now?

Exactly when Putin would profit most from having the biggest arms dealer home? pic.twitter.com/B9mD34rv7M