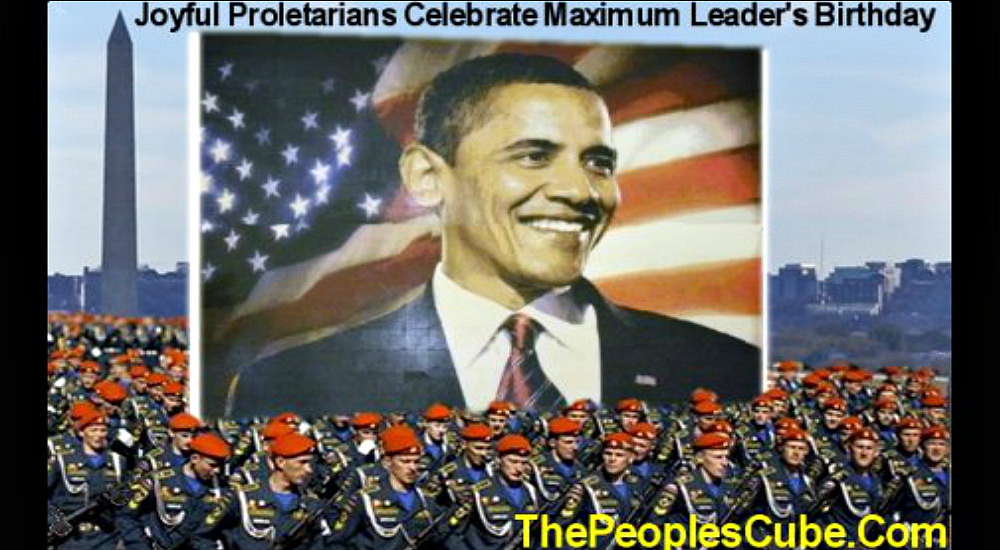 In my previous article The Democratic Party’s Campaign of Violence, I mentioned… back in 2009, in Obama’s first term, President Barak Obama promised to create a massive civilian army. Obama proposed his ‘citizen-army’ should be just as big, powerful, and as well-funded as the U.S. military!

A Few years later, in 2013, in Obama’s second term, both Barak and Michelle Obama spoke about the added need for a ‘youth-army’ or youth corps.

So, one might ask, who are the Obama’s expecting this new citizen-army or youth-army, to be fighting against? We have a military with several different departments; we have city police and county sheriff departments throughout the nation; there are state police departments as well as many intelligence and investigative agencies. So, why do we need a citizen-army as well funded as the U.S. military? This not only sounds very expensive but, also very Orwellian. One has to wonder, what kind of threat are they expecting? Why haven’t they let us in on why we need a civilian-army; just what do we need to be prepared for? M-m-m-m…Climate Change?

(Furthermore, I thought Democrats regarded the military and policing as evil; just sayin’)

In retrospect — could all this current violence we have been witnessing via violent post-election protests throughout the nation be the birth of Obama’s so-called civilian-army? Is this Obama’s wet-dream; a vigilante civilian-army fighting and lashing-out against the new administration? This all sounds very strange and conspiratorial indeed; but what are we to make of Obama’s words that project an emphatic need for something that sounds eerily like the call for a civilian-nazi-youth group!

When violence by unhinged leftist Democrats breaks-out throughout the nation, and Democrats don’t denounce and call for an end to it, it just makes one suspicious…Or, do these ungrateful maniacs really think they are proving something? Do they really believe they are showing everyone how truly sophisticated, reasoning, enlightened people react to losing an election? Are they showing us a better way…through violence?

The liberal-left now operates in society much like a ‘liberal-jihad’ complete with their own sleeper-cells in-waiting, throughout America. The Democratic Party, in adopting a hybrid of Marxist, existential, and polytheistic inspired philosophies, are now fighting against many of the Christian founding principles set forth in America’s founding documents and its once revered and exceptional, Rule of Law. The Rule of Law was originally set forth to control power at the top. So that no king or ruler could change the law at will for their own purposes, like raising taxes without the people’s consent. The rule of law meant that rulers and the people were subject to the same laws, and those laws could not be changed without the consent of the people. Today the ‘rule of law’ is being abused and sometimes put aside by both Democrats and Republicans. It is a dangerous trend which needs to be reversed and returned to its original purposes.

Leftist liberal activists are willing and ready to further divide our nation politically in order to stop or slow down the progress of the current Trump administration’s law and order philosophy. In addition to the street mob-violence, there are also judicial and bureaucratic government operatives creating a coup d’ etat environment in a direct attempt to intimidate and force President Trump out of office – or at least make the Trump administration back down — much like Governor Schwarzenegger did in California.

Government bureaucracies and their unions are also beholden to the Democratic Party (no conflict here?) for their existence and livelihood and many government employees are partakers of the corruption certain agencies engage in routinely; including violence and suppression of its citizenry. (IRS, EPA, ATF, etc.)

In early April 2017, Trump supporters were met by violent social-justice warriors in Berkeley California. After the fight was over it turned-out the social justice warriors got their asses whooped. This has prompted the social-justice warriors to say; “A shocking number of our comrades went in there with absolute no combat training. We need to set up seminars or something of the sort…I honestly think we need a campaign to get more Antifa armed…We need to take notes from the John Brown Gun Club and get firearms and training…The social justice mantra is changing…Now, it is about forming mobs to do what they call ‘punching Nazis.’”

Their term, punching Nazis refers to attacking Trump supporters, or someone with a Trump bumper sticker, or someone with an American flag, or a Gadsden flag (the traditional symbol of American Independence and freedom). This from the so-called compassionate ones.

In March 2017, Judicial Watch obtained records about a group operating at the University of Central Florida called the Knights for Socialism, a leftist fight club. Turns out there are hundreds of these clubs throughout the country. The group describes itself as a coalition of Marxist-Leninists, Anarchists and Democratic Socialists where everyone is welcome, except Republicans. Records obtained reveal they conduct workshops to teach their “comrades” to Bash the Fash (beat-up Republicans) and the so-called alt-right.

Meanwhile, sane moderate Democrats (if there are any remaining) refuse (or cower-in-fear) to speak-out against their marauding bands of lunatic-fringe community agitators and hatemongers. In fact, no one in the Democratic Party seems to be the least bit embarrassed by the bizarre and violent behavior of these community agitators. Instead, they act as if protesting with violence is some kind of noble patriotic act!

If Barak Obama’s words have any real meaning regarding the funding and arming of a so-called citizen-army, we can likely expect continued violence and possibly a better armed, better prepared bunch of lunatics just waiting for any opportunity (or just make one up) to protest through violence and destruction. I prefer they just try to win at the ballot-box; but then, they are Democrats. Be alert, be prepared.