Is the Betsy DeVos Appointment a BIG Mistake? 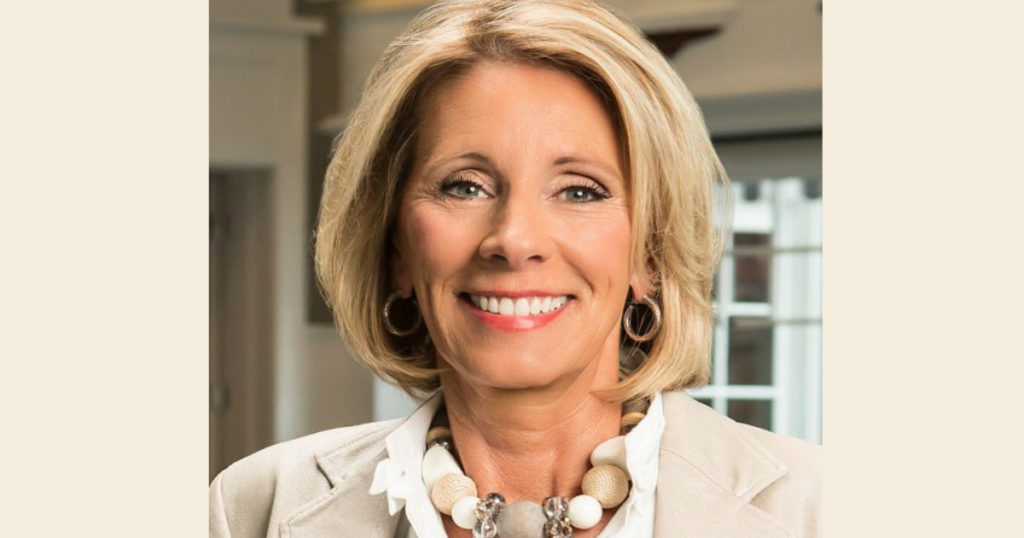 When Betsy DeVos’ name came up as candidate for Secretary of Education, a howl of protests rose from both sides of the aisle. Being Trump, the President would not budge and managed to get her into that position. Already the ramifications are, well, HUGE!

The very first action of Ms. Devos, as Secretary of Education, was to buck Trump (perhaps that descriptive needs a one letter change) who had overturned Obama’s law to grant rights for men to have access to girl’s bathrooms, showers and locker rooms everywhere, including schools.

This insane Obama maneuver was properly cancelled by executive order of our new president. Yet, Ms. DeVos began her term by opposing the reversal of the knuckle-headed Obama transgender school mandate and wants men back in little girl’s rooms.

Ms. DeVos told President Trump that she was uncomfortable because of the potential harm that rescinding the protections could cause transgender students.  Harm to the deviants? What about the majority of the kids?

The New York Times reported: “Attorney General Jeff Sessions, who strongly opposes expanding gay, lesbian and transgender ‘rights’, fought Ms. DeVos on the issue and pressed her to relent because he could not go forward without her consent. The order must come from the Justice and Education Departments.”

Tony Perkins wrote: “They went on to say that for nine months, parents, local districts, and states have been storming the courthouse doors to fight back on the decree, which insisted that every public school force students into the humiliating situation of sharing showers, restrooms, and locker rooms, with members of the opposite sex.”

These kids do not need co-ed showers, locker rooms and toilets. They need counseling. Mental illness should be treated, not celebrated.

Ms. DeVos stated: “The Education Department’s Office of Civil Rights remains committed to investigate all claims of discrimination, bullying and harassment against those who are the most vulnerable in our schools.”And who might that be? It is certainly not the degenerates.

Mrs. DeVos has bought the leftist belief that “objective, immutable biological sex has no intrinsic meaning, including in regard to modesty and privacy.” A federal district court in Texas, however, held that the term ‘sex’ unambiguously refers to–now get this–BIOLOGICAL SEX! Case closed!

LifeSiteNews reported earlier that Ms. DeVos and her husband Dick DeVos have a long history of siding with homosexual and transgender advocates, and against pro-family and tea party Republicans in her native Michigan. So how on earth could President Trump even consider turning her loose on all of our school children? So she can instruct students how to be perverts?  President Trump needs to rescind her appointment without delay.

Richard DeVos took the more folksy name “Rich” to make him appear that way to disguise his true identity, a ruthless businessman who did not care who he hurt as his love for mammon became an unquenchable thirst. You will see below how and why he was sued by Proctor & Gamble.

Richard DeVos, a star in certain church circles, is a man who loves being wealthy to the extent that he flaunts it, and at times appears to be showing off. He dresses the part of a very successful businessman and his overall carriage would seem to confirm it.

Having seen and observed him at several minister’s conferences where he was always the featured speaker, he would make a point of stating from the podium, “Don’t ask me, I’m not going to give any of you any money.” The sheeple would give a knowing muffled laugh acknowledging that they knew he was wealthy, that they were awed by that fact and they would like to have some of that money.

The name he chose for his company, AMWAY, was a derivative of the Name God, Who Identified Himself to Moses, when asked what name He should be known as. God answered, “I AM THAT I AM.” (Exodus 3:14.) So with not so subtle implications, AMWAY would be to Christians, God’s Way. Clever.

In his quest to make a fortune, DeVos developed a pyramid scheme selling operation. Amway would consist of household products that would be hustled, door to door, to one’s own family or in contacts developed through social circles, neighbors, civic organizations and of course, the church. The goal is to recruit more salespeople. Indeed, the first people the recruits were to hustle were their own families, where sales were certain. Then they would go to others.

An ambitious salesman/recruit gives an illustrated screen presentation of the effectiveness of the products, convinces the ‘mark’ (carnival term for sucker) of the fortune to be made, as each salesman recruited would have part of their commissions directed up the pyramid to the one that recruited him, and the one who recruited the recruiter who….and on it goes. It is the ultimate ‘Pyramid Scheme” that legitimate businesses frown upon.

It is to be remembered that Proctor & Gamble, who also dealt in household products were hit by vicious rumors stating that their symbols are satanic and that an executive with P&G stated on The Phil Donahue TV Show that they were supporters of Satan. Nobody checked the Phil Donahue show to verify this. We did. The program directors declared no such program ever took place and no appearance by a P&G executive ever took place. We were invited to view their library.

The particular church folk mentioned were (and are) quick and anxious to run with any damaging rumor about anyone, especially someone in the public eye.

The false stories took a devastating toll on P&G. THEN they learned that these rumors began with Rich DeVos who started the whole campaign, wanting to knock out competition with lies and slander, typical tactics of this misled church body. P&G sued Devos and AMWAY and were awarded over a million dollars.

One sales technique of recruiters is to make the mark dissatisfied with what they presently have. “You shouldn’t settle for this, you should have a bigger house (photo shown) or, top-of-the line car (photos of Rolls Royce) and be able to enjoy life” (photos shown of tropical paradise complete with palm trees and bikini-clad girls).

At a service I did at Trinity Assembly of God in Charlotte, Pastor Calvin Bacon introduced me to Dexter Yeager who had become a close friend of Jim Bakker host of The PTL Club. Yeager had become a legend of sorts. In his forties, he had found himself out of work, joined AMWAY and amassed a fortune, along with several banks he acquired. Now he had the best of everything, including a fleet of limousines for his personal use.

Yeager had the unusual habit of carrying a shoulder satchel. “Take a look inside,” he invited me. I reached in and came out with a fist full of one hundred dollar bills. “Good Lord,” I exclaimed, “How much is in there?”  “Fifteen-twenty thousand dollars,” he answered nonchalantly. “This is my pocket money.”

Yeager put on a good show as he encouraged Christians to indulge in the sins of covetousness, greed pride, lust for power and the root of all evil, the LOVE of money. Get that? He encouraged sin in order to recruit and make more money. And this is where the beginning of the spectacular downfall of Jim Bakker began.

It was DeVos’s man, Yeager, who corrupted Bakker by convincing him he should not be satisfied with what he had. Jim so admired Yeager, his lifestyle and the money he was able to make utilizing the AMWAY pryamid sales scheme, that Jim let Yeager sign him up as an AMWAY representative.  He then began to hustle each studio audience, usually about 200 a day that came to the telecast, making his followers, ‘marks’, instead of souls he had been entrusted with.

But let’s get back to Richard DeVos:

Checking internet sites later, I found one that had a stock of Apologetics books. That was a subject of interest since a concentration on my Bachelor’s Degree would be Apologetics.

When I went on the Website I learned it was a news and products site owned by DeVos. As I started checking through, I found a whole section devoted to vicious attacks against me, with not one truthful “fact.” It was all written as truth by Richard DeVos.

Shocked, I was ready to sue him and had three atheist lawyers ready to take the case pro-bono, and that included the ACLU. Even though, no doubt I could have won. I deeply felt that I should show that there is at least one Christian around, and withdrew the case knowing that this case would serve the atheists in discrediting Christianity, giving more “proof” to the public that Christianity is bad and should be avoided–even disallowed.

Smith Wigglesworth, a totally Spirit Filled man was once taken to visit an asylum for the criminally insane—inmates with the definite spirit of Satan within them. As he entered a door at one end of the huge room, all the inmates began screaming, yelling and pounding the bars of their cells with metal cups.

When Wigglesworth went out the door on the other end, the inmates suddenly quieted down and were at peace. Ironically, this shows a distinct similarity as the Spirit of Satan clashes with the spirit of God, causing chaos and screaming.

There is more than enough data and facts about Betsy and Richard DeVos to warrant removing Betsy DeVos from the position as Secretary of Education without delay. It is to President Trump’s detriment to leave this loose cannon in charge of our public schools. Indeed it would be unthinkable.