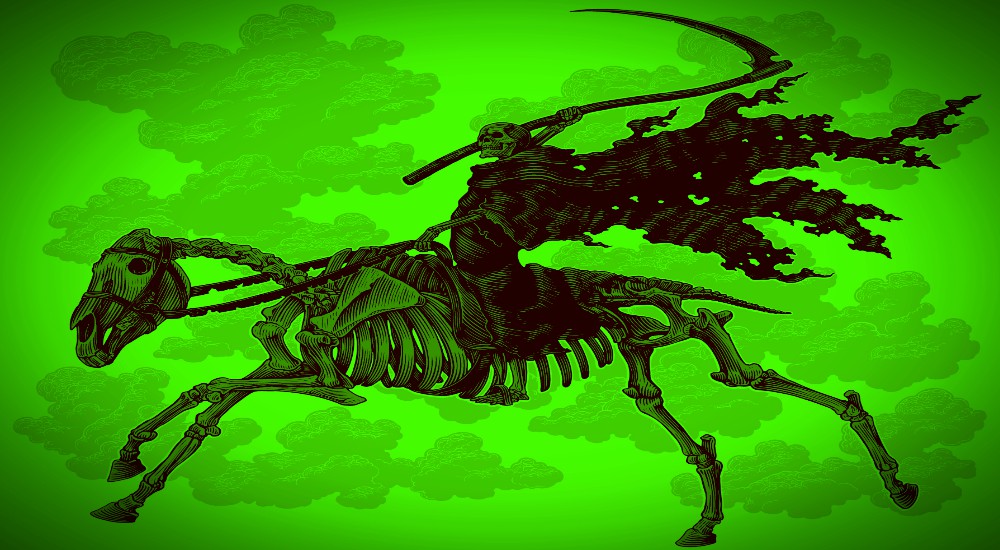 “Behold, a pale horse: and his name that sat on him was Death, and Hell followed with him.” – Revelation 6:8

The original New Deal (11933-’36) was a series of programs, public works projects, financial reforms and regulations enacted by President Franklin D. Roosevelt, designed to rescue the US from the Great Depression.  The artfully-name Green New Deal, proposed by Democrat-socialist Alexandria Ocasio-Cortez (NY), is a series of drastic changes designed to divert the US from the path of improvement and greatness set by President Donald J. Trump and propagate Obama’s disastrous and divisive policies.

President Trump’s focus on energy has been removing the Obama era’s burdensome energy regulations so that we are now experiencing an unprecedented boom in domestic oil production and energy independence.  We are exporting more oil than importing for the first time in 75 years.   Trump has been so successful, in fact, that Obama has tried to assume the credit in the hope of salvaging his eight years of failure.  The unscientific, childish Ocasio-Cortez endorses the climate change hoax, blaming every winter storm and summer hot spell on corporate America and on cattle with normal gastrointestinal activity.  As clearly clarified by Paul Driessen on cfact, “AOC wants to lead the world in economic suicide, environmental degradation, plummeting living standards, shorter life spans, and societal upheaval.“

Her desire to raze, rebuild, and refurbish every building with, allegedly, non-polluting solar or wind-power equipment, would create an insurmountable debt.  Considering the revelation that she is supported by anti-American, globalist and Nazi-sympathizer, George Soros, it may be that she hopes to erase all remnants of our national history, a common aspiration for every tyrannical regime that has not the ability to improve on what others have achieved.  Alexandra has described herself in divisive intersectional terms, as a Puerto Rican descendant of African slaves, Indigenous people, and Spanish colonizers.  She does not call herself an American and seems to have no affinity for the welfare of our country and our fellow-Americans.

It is not uncommon for a conquering power to burn (or replace) books and destroy historic sites and monuments, and to erase their essential cultural knowledge and evidence of existence.  Today we have leftist instructors who have stopped teaching America’s history and Antifa groups and students tearing down our memorial statues, recalling the disposal of artifacts under the Temple Mount, the ruination of the Buddhas of Bamyan, and the damage done to Christopher Columbus images. Every edifice has an architectural style and history that, serving as a memorial to the earlier generations and an inspiration to succeeding ones, we have the duty to protect.  But under the ruse of energy replacement, O-C would demolish all and replace with communist-style, regulated, mean living quarters – if, indeed, she would rebuild anything at all.

Her plan could well be more sinister.

Her program calls for the complete cessation of all methods of transportation that rely on fossil fuels, leaving many millions of people jobless in manufacturing, warehousing, sales, and product shipments, thereby returning us to the backwardness of previous centuries.  Without air travel, international business becomes virtually impossible.  Without shipping, we could not manufacture or trade with the world.  Without trucks, we would have few internal shipments, including foodstuff.  Without cars, our ability to travel within our own country would come to a standstill, save bicycles, among the most vulnerable in road accidents in China.  O-C proposes a high-speed rail, such as the disastrous Fast Train project in California, where the cost overruns are becoming world-record setting – hair-brained or intentionally meant for a financial collapse.

Following O-C’s destruction of cattle, junior Senator Cory Booker (D) would impose his vegan food choices on the rest of the country.  Therefore, in addition to losing cows (beef, milk and all dairy products, and foods that require those ingredients), he opposes chicken and eggs with a misplaced sense of morality, since he clearly does not consider the health and welfare of his fellow citizens.  Neither is he concerned about the inevitable burgeoning prices for other foods that must replace what had been our necessities.

With O-C’s destruction of the transportation, beef and dairy industries, and Booker’s destruction of the poultry industry, and the various feeds grown for their animals, the number of unemployed would reach an insuperable level.  The burden of feeding the populace would fall on low-wage, labor-intensive grain, vegetable, and fruit growers, and be subject to the variations of climate and weather.

Despite our current all-time low employment achieved under Trump, the better educated, highly skilled might not be employable if O-C’s madness were implemented.  She assures that everyone would be an employee of the government, as pharaoh’s monarchy employed its slave labor.   O-C’s proposed 70- to 90-percent tax rate might also be reasoned as the citizens’ paying themselves.  Our country would become a Welfare State.

Elizabeth Harrington, in The Washington Free Beacon, assures us that each federal (or monarchial) job comes with:

Again displaying her intersectionality biases, In case life is not utopian, her plan calls for “reparations for all but white men.”

Roosevelt’s Works Projects Administration (WPA) employed millions of unskilled people for construction of public buildings and roads – a storm of great activity and inventiveness.  By grim contrast, O-C’s administration would engage low and unskilled laborers to systematically raze our architectural achievements – edifices designed with the charm of Baroque, Colonial, Neoclassical styles, and more – and replace them with a depressing energy-efficient sameness in every town and city.  The streets would have to be an unimaginable grid of steel tracks to support the massive public transportation system and a blight of charging stations everywhere for State-approved electric vehicles.

As a set design of the bleakest futuristic Science Fiction films springs to mind, we are being herded to the ever-closer socialist dream of a controlled society, where individual choice is disallowed by the State, and our lives lead unwaveringly to a predetermined destination.