The Ball and Chains of Supporting Donald Trump 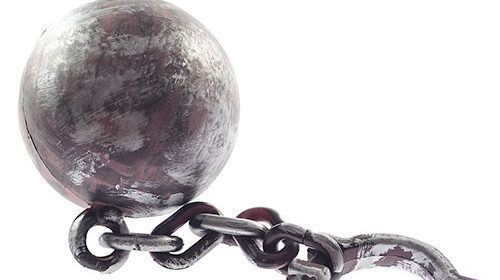 Whether it be Betsy Devos being protested outside a DC School, or a twitter rant on diverting from Donald’s obvious ignorance of the Constitution to what an ex-president may have or may not have done, one can find the ball and chain of being a supporter of President Trump holding many back from being successful and having their own desires and idealisms.

The lashing out by the surrogates of Donald, to the hate filled tweets of his supporters show signs of a tiring minority trying to explain and defend the non-defendable words and actions of a narcissistic, repugnant man of arrogance and low intelligence. These people have BDR “Borderline personality disorder”, where they not only have a self-hate, and feel like the world is ruining the lives they imagine. If you have borderline personality disorder (BPD), you probably feel like you’re on a rollercoaster—and not just with your emotions or relationships, but your sense of who you are. Your self-image, goals and even your likes and dislikes may change frequently in ways that feel confusing and unclear.

These same people believe that they are entitled to show hatred, bigotry, and lie since their tyrannical egocentric President does so with such frequency. Julius Caesar wasn’t a typical person but an emperor; he didn’t do “whatever he pleased”. People who do whatever they please can be called “solipsists” (those who believe “that the self is the only existent thing”) or “sociopaths” (“a mentally ill or unstable individual; especially one having an antisocial personality”). We have seen this social-pathetic tendency in many of Donald’s political supporters, while we see the “low educated”, as Donald Describes them to be more zealots who show blind allegiance to a deception of great magnitude.

The media is not “Fake News”, but one that stands up against the game show hosting that Donald Trump prefers to play. The first Amendment is not one to take lightly for it holds the gems of freedom of religion, freedom of speech, and the freedom of media to report factually on the issues at hand. Donald Trump wants to limit, even change that to limit discourse where he is not praised at every turn. The Ball and Chain Gang of followers cheer loudly when he states “FAKE NEWS”, although they are not aware of the major consequences of destroying our freedoms.

These lemmings are willing to drag the Ball and Chain to the end in the hope of some superior motive, some unknown power of knowledge given to them and their leader, Donald Trump, that us “Common Folk” do not have the ability to comprehend. These sycophants are so full of rage about the previous president, that their anger, racism, and bigotry is coming out in such detestable ways, and they are completely unaware of it.

These knee-jerk drones are willing to drag the ball and chain for every wrong word, every wrong action, and create fake accounts around the internet to try to prove that there are more supporters than actually exists. Showing bigotry with illegal immigration mandates and supporting it does not show mental stability. Bullying businesses and taking credit for companies hiring more employees that were planned prior to the last quarter of 2016 is classic narcissism. One can offer evidence after evidence on a matter, but the Ball and Chain gang will not believe their lying eyes or deaf ears if it does not sing praises of glory and hallelujah to their President, a 70-year-old court jester.

From the evidence of Russian connections, thousand of fake social media accounts to turn people to Trump all had a detrimental effect on the election, but will never be admitted by the B&C gang. Stopping legal immigrants and immigration goes deleteriously against the Constitution. The B&C gang has no problems with Putin and the connections of his men to people like Mannafort, Tillerson, Bannon, Trump boys, etc. Gaining profitable arrangements as President for his family, and after he leaves office is abhorrent and Impeachable, but the B&C gang says he is ok to do these activities. Stopping daycare for the military personnel since it is a monetary burden while paying upwards $30,000,000.00 monthly to secure BARRON and MELANIA in their golden palace in New York is what is wrong with the B&C gang for accepting. The Ball and Chain Gang feels no need to provide reasoning or defense of this, but spew out name calling like Barack Obama is Islamic, GWB was a loser, If you are against Trump, then you are a “LIBERAL”, which if they realized that 1 plus 1 equalled 2 then they would understand that being liberal was not as insulting as being a Trump supporter, even if you are not Liberal. They support pedophilia and Milo, bigotry, and Trump, Bullying against businesses, Lies by Kellyanne Conway, Russian aggression in partnerships from Tillerson and other cabinet members and staff members. Irrational tweeting by a sociopath at 5 and 6 am in the morning, but cannot accept that Donald Trump actually is wrong for America?

Donald Trump has made the World take a second look at the United States, and many find it distasteful, arrogant, and a joke. National Newspapers are showing trojan horse style articles, Britain is embarrassed to offer Trump to the queen, and Ireland knows the underbelly of Trump and his dealings.

While all of this is everywhere, Trump’s voice, being that it is supposed to be the voice of America causes conflict, hatred, and violence around the world. America is the opposite of this. America is one that usually is the leader in unity, and the end of a conflict, but not lies that create terrorism and conflict. The Ball and Chain Gang have little to no knowledge of the precipice that Donald Trump has brought America to. The Ball and Chain gang has slipped into the slithering diatribe that will begin the WWWIII if not controlled quickly and definitively.

America can no longer accept the Ball and Chain Gang of Trump supporters any more than they can Accept Donald Trump and his illegal activities as President.