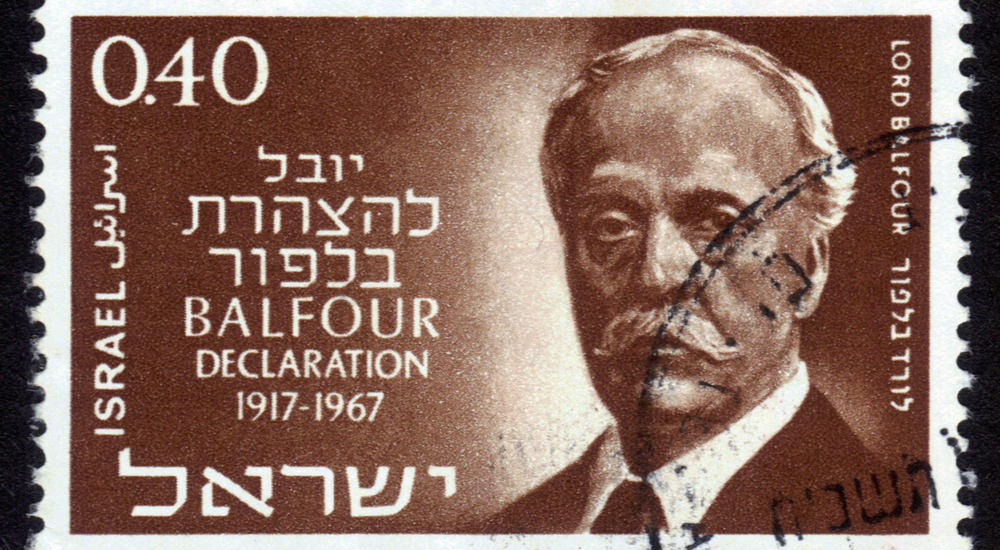 The Balfour Declaration was a public statement issued by the British government during World War I announcing support for the establishment of a “national home for the Jewish people” in Palestine, then an Ottoman region with a minority Jewish population. It read: “… His Majesty’s government view with favour the establishment in Palestine of a national home for the Jewish people, and will use their best endeavours to facilitate the achievement of this object, it being clearly understood that nothing shall be done which may prejudice the civil and religious rights of existing non-Jewish communities in Palestine, or the rights and political status enjoyed by Jews in any other country …”

Gary Gindler, political analyst and blogger (Gary Gindler Chronicles, WARNING! Politically Incorrect Zone), well-known to iPatriot readership gives his interesting take on the historical figures in that century-old history of the Balfour Declaration, including US President Harding (a Republican).
Here it is, article republished with permission from Gary Gindler:

“The Conservatives Who Resurrected Israel”

“On November 2, 1917, exactly 100 years ago, British foreign secretary Lord Arthur Balfour sent a private letter to Lord Walter Rothschild, the second Baron Rothschild.  The letter was written not by Balfour, but by other ministers in Lloyd George’s Cabinet – Lord Alfred Milner and Leopold Amery.  In history, this letter became known as the Balfour Declaration.

Both Balfour and Milner were true Britons.  Rothschild was proud of being a Jew.  Amery was a Jew who carefully concealed his Jewish origins.  What united this quartet?

All of them were, of course, to some degree, Zionists, but only to the extent that such was in the interests of the British Empire.  Otherwise, the Declaration would never have happened.

The main thing is that they were all members of the Conservative Party of the United Kingdom.

Leopold Amery was a conservative member of Parliament from 1911 to 1945.  It was he who proposed the idea of the creation of the Jewish Legion of volunteers in the British Army during the First World War to Vladimir Jabotinsky.  His résumé noted him the first lord of the Admiralty, the holder of an uncompromising position on National Socialist Germany, and the all-round supporter of Winston Churchill.

Lord Alfred Milner was one of the most influential Conservatives in the government of Lloyd George.  He was one of the five members of the War Cabinet.  For several decades, he played a decisive role in formulating the domestic and foreign policies of the British Empire.  After his death in 1925, his place in world politics was taken by a Conservative of an even larger caliber: Winston Churchill.

Lord Walter Rothschild descended from the famous family of Rothschild bankers.  He was a Conservative member of the British Parliament from 1899 to 1910.  Many years before receiving the letter from Balfour, Baron Rothschild withdrew from political and banking activities and became a famous zoologist.  Nevertheless, he was the one chosen by the British government to disclose its decision to allocate part of the territory of the Ottoman Empire to the Jewish state.

The decisive meeting of the Cabinet was held on October 31, 1917.  Most Cabinet members supported the idea of the Declaration.  The recognized world leader of the Zionists, future first president of Israel, Chaim Weizmann, was informed immediately after the vote as he waited for a decision in the lobby.  But the Cabinet chose a very English method to publicize its historic decision – in the form of a private letter to the leader of the British Jewish diaspora, Walter Rothschild.

The leader of the opposition to the Declaration was Edwin Montagu – one of the few Jews in the British government, and one of the most radical left-wing politicians in the United Kingdom.  Montague did not take part in the meeting on October 31 because he was traveling to India to assume the post of secretary of state in the colonial administration.  Perhaps Edwin Montagu is a founding father of a strange leftist cult of Jewish anti-Zionists, which exists in many countries to this day.

Of course, the British government had no right to dispose of the lands of the Ottoman Empire in 1917.  The war was still going on, and the official division of the territory of the Ottoman Empire had not yet occurred.  But the British were in a hurry, and for a good reason.  They forestalled a similar declaration from the German Cabinet by just a few months (hat tip: Daniel Kluger).

Despite this, all the Allied countries supported the idea of creating a Jewish state on the territory where no one doubted the claims of the Jews to the land.

Although the United States was not a member of the League of Nations at that time, the 67th U.S. Congress in 1922 adopted the Lodge-Fisch resolution (both Republicans) proclaiming support for the Balfour Declaration, and President Harding (also a Republican) signed it.  The resolution was so popular that both the House of Representatives and the Senate adopted it by a simple voice vote.  Republicans in the 67th Congress had a significant advantage: they occupied about two-thirds of all the seats.

In 1932, marking the fifteenth anniversary of the Balfour Declaration, Republican President Herbert Hoover reaffirmed the U.S. commitment to the principles of creating a national home for Jews in the Holy Land.

What remains puzzling in this historical account is how this idea, proposed by the Zionists and backed for decades by right-wing politicians, led to the creation of the leftist and virtually socialist state of Israel in 1948.”

They Didn’t Even Give Joe Biden One Day Before They Started Rioting… (Video)
January 21st, 2021 Sons of Liberty Media

CRITICAL RACE THEORY: How This Guy Is Leading The Fight Against It
January 21st, 2021 Clash Daily