At Last-A Pastor Who Mans His Pulpit 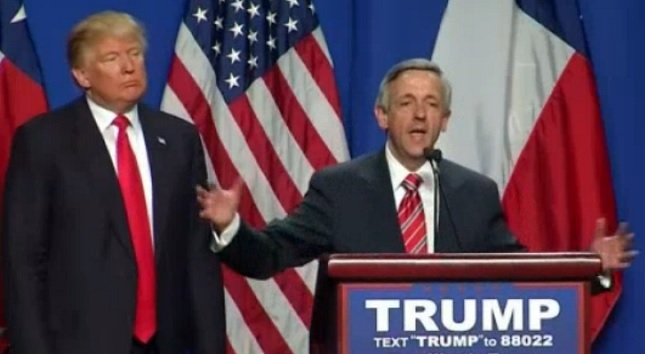 Pastors who preach the truth these days are rare. Preachers today are more concerned with not offending anyone than they are about preaching the pure Gospel. After all they might lose customers if they offend anyone. Yes CUSTOMERS. That was said on purpose and with sadness. This is what the churches have become.
However, one of my favorite pastors is one I’ve never met but watch every Sunday on Daystar Television. He is Robert Jeffress. He not only consistently preaches a compelling message but he brings everything happening in this sick world (where Demon-rats run wild), into Biblical prospective. He is pro-life, lets it be known, and says those who insult and try to sabotage President Donald Trump are spineless morons! He and President Trump are friends with great respect for each other.
It is the MINORITY of citizens who are trying to have President Donald Trump impeached. What? For what? The vast majority of Americans, over 68 million of them, quietly went to the polls and LEGALLY VOTED HIM IN. And he has kept his promises. Let us never forget that. The Democrats try to make us think there are more of them than us. Spontaneous wind elimination of a cow!  That was the old Communist tactic in the Soviet Union.
Jeffress, the pastor of the First Baptist Church in Dallas said, according to Todd Starnes, he doesn’t understand why Never Trump evangelicals (those would be Democrat pastors) refuse to acknowledge the good that the president has done… especially on the issue of abortion.
“This is an issue of life and death,” he told Starnes. “This is so black and white, so much about good versus evil. I don’t get it. It really goes to the core of who we are as a country and what kind of a country we have in the future, and if we can’t get this issue of life right, I just don’t know where we’re going.”  Rev. Robert Jeffress is a genuine pastor who preaches truth. He has a large congregation and preaches to the world on TV.
The churches of America consists of empty pulpits. Most of these behind the empty pulpits of our nation are ever worried that they may lose their 5013C tax exemption if they speak about anything political, at least that is what the Democrats have made them believe. So whatever you do, do NOT speak about  traditional marriage or abstinence, or warn against drinking, hell-raising, lying, bearing false witness or gossiping sayeth they.
The greatest lying has originated in our government. First of all, churches were always tax-free since the church provided so many social services which saved the feds money. Marriage ceremonies were strictly a church function. They interviewed the couples, performed the service, and presented the Marriage Certificate, which was considered legal.
Then out of nowhere, the State forced a partnership with the church, which canceled the strict law about Church and State intermingling. The State announced that in order to be married, a couple must pay The State for a License to Marry, costing almost a hundred dollars for the license that the pastor must sign and mail back to the country clerk. If a couple decided to divorce, they had to bring in lawyers costing thousands of dollars and extra tensions where before the pastor could issue the divorce.
And it is to be mentioned that ‘The State’ has changed the wording of the marriage licenses that citizens are required to purchase before matrimony. Instead of “Bride and Groom”, it is now stated as, “Party one-Party Two.” Yep any combination of bodies can now be considered married.
There are several pastors this columnist looks up to. Plus, this ministry is also a ministry of truth, with The Bible as the blueprint for life and for handling all of life’s challenges. Do I hear an Amen out there somewhere?

Revival In The Time Of COVID — Franklin Graham Says More People Have Received Christ in 2020 Than In 2019
December 4th, 2020 Clash Daily