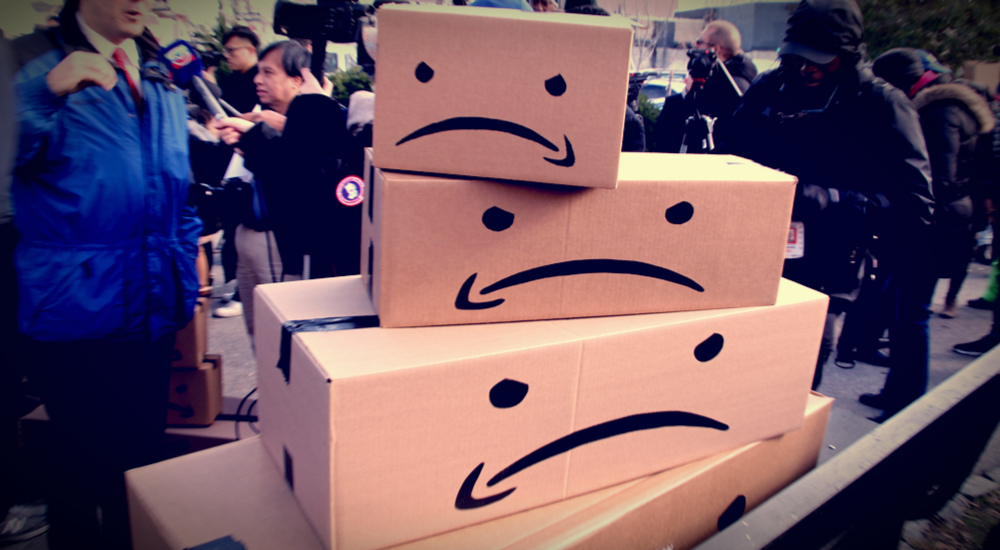 Using utterly backward liberal logic, Chiquita Khrushchev torpedoed Amazon’s bid to move a headquarters into NYC in the ditzy belief that New York was going to pay Amazon $3 billion for the move.  Now she thinks that she and her witless democratic socialist idiot friends have $3 billion to spend on social justice programs.

Amazon was on the verge of moving a headquarters to New York City and bringing the city $30 billion in tax revenue in the next ten years along with 25,000 taxpaying jobs with a full range of income opportunities for New Yorkers.  Mayor de Blasio agreed to give Amazon a ten percent tax cut over ten years as an incentive.  This witless wonder, AOC, believed the city was going to pay them $3 billion dollars rather than going to make $27 billion in tax revenue over ten years.

This is akin to the lead article in liberalsbackwardsthink.com that describes liberal’s mentality in handling money.  They think that if they buy a $100 item at 20% off that they made $20 that they could spend rather than having spent $80.  Their logic is backward when it comes to finances.  The problem with democratic socialists is that they believe profit is theft rather than growth.  They think businessmen make profits by stealing from their customers and pocket that money.  AOC, like all liberals, don’t have the first clue of how business actually works.

AOC thinks she did a great service to New Yorkers

Here’s the reality for the bug-eyed bimbo who only lacks the blonde hair:

This is how Democrats think.  They believe the government pays for jobs.  They don’t comprehend that businessmen are the ones who create jobs.  They don’t understand that employees are not workers in a socialist encampment where everybody gets paid the same for whatever they contribute.  People earn better money when they have more education and more experience that they bring to a job.  A janitor who only knows how to push a broom does not have the value of a doctor who had eight years of education and twenty years performing surgery.

Democratic socialists believe Bezos has stolen billions of dollars from poor people and is only trying to steal more.  They don’t see businessmen as enabling people to get good jobs, develop skills, and improve their lives.  They think the government taking money from those people and giving it to those who don’t work is benevolent charity being fair.  The problem with leftists is that they understand better how thuggery works to take money than they do of how trade works to make money.

Socialists fight business because they see business as ruining their neighborhoods

What sounds like good logic to liberals is founded in their false premises and misunderstandings of what business is and how it works.  They complain that a business like Amazon would make the poor poorer and give the good jobs to people they bring in from outside where they live.  They say it would make their cost of living increase to drive the poor away.  This is the problem with socialist governments like California that drives the poor people out of the rich areas while expecting them to commute in for low-paying jobs.  They make a good point except that it is their Democrats who are the ones creating these conditions with their high taxes, not any of their hated Republicans.

Democrats Fight the Noble Cause of Saving the Planet