Why Anyone “Needs” An Assault Rifle 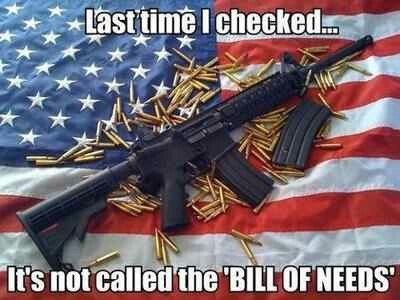 Time and time again, you hear it. From Piers Morgan to President Obama, from Barbara Boxer to Harry Reid, and from Hillary Clinton to Chuck Schumer, it’s the same old trite, rhetorical question from the uninformed left: “Why does anyone need an assault rifle?”

They’re sure to throw in how these death-rays are even deadlier thanks to their “assault clips” that enable them to blast out (insert made-up number of rounds per second.)

By definition of the term, an assault rifle must have fully automatic capability. The weapons we can stroll into a gun or pawn shop and purchase are merely civilian copies of these assault rifles. They are semi-automatic, once again. That means one shot per pull of the trigger.

It doesen’t take a rocket scientist, or, in this case, a soldier or law enforcement officer, to know the difference between the two. A simple web search would provide an uninformed anti-gunner with all the necessary information that exists to differentiate between a semi-automatic rifle and an “assault rifle.”

“Okay,” a supporter of abolishing Amendment #2 might quip, “but still, why do you need one anyway?”

First and foremost, a free people should not be required to express a “need” in order to purchase and possess something. If we only owned necessary items, why, we’d still be picking berries and throwing rocks at birds and sleeping in caves.

But, since you asked: one, they are just plain fun to shoot. There’s nothing quite like a thirty round magazine dump down range. Also, contrary to anti-gunners always telling us how useless they are for hunting, the AR-15 is ideal for game in the Southeastern U.S. When you’re after fast moving and potentially dangerous game like feral hogs or coyotes, you want something accurate that is capable of quick follow-up shots.

But the main reason we own these rifles is the same reason we have the Second Amendment: keeping an overstepping, tyrannical government in check.