The Anti-Federalists of 1787 were Right!

Anti–Federalism refers to a movement that opposed the creation of a stronger and more centralized U.S. Government and which opposed the ratification of the 1787 U.S. Constitution. The previous constitution, called the Articles of Confederation, gave state governments more authority and power.

So what led to the replacement of the Articles of Confederation?

The Articles of Confederation was replaced with another document (U.S. Constitution) which called for a much larger and more centralized federal government?

The following is a list of articles written by the anti federalists opposing the ratification of the U.S. Constitution:

Summary of the anti federalists:

The anti-federalists were right. Our nation’s Founders were wrong to replace the Articles of Confederation with the U.S. Constitution:

The Constitutional Convention of 1787 was held in secret:

The original intent of the convention was only to revise or add amendments to the Articles of Confederation. None of the delegates had been authorized by their state governments to make sweeping changes to the Articles, let alone to throw them out entirely and start over.

To put it another way: 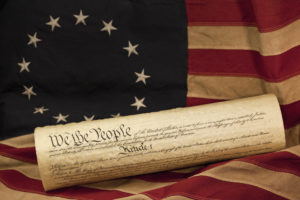 The main reason is that the colonies sent delegates to the convention for the strict purpose of amending the Articles of Confederation, not creating a new Constitution to completely replace the Articles. The delegates kept much of their deliberations secret by using the “Committee of the Whole” as a device to evade having to record some of the actual discussions and resolutions. Under the Convention’s customary rules, whatever was discussed in open session had to be recorded. Whatever was discussed in committees did not. So in order to discuss a full replacement of the Articles secretly, the Congress frequently went into what they called a “committee of the whole”, which just happened to comprise the whole entire Congress. This way the whole Congress could discuss the new Constitution but did not have to record the discussion, because it was being discussed in a “committee”. They knew that if some states found out they were devising a new government rather than just fixing the old one, those states would have re-called their delegations. As it turned out anyway, many states accused the Congress of going beyond its authority and creating something that was unauthorized and void. Despite those arguments, the Constitution was still ratified.

The delegates sent to the convention by the states were only there to amend the Articles of Confederation, not replace it:

Americas Founders were sinners just like you and I are today.

Americas Founders were sinners just like you and I are today. Yes. They lived under a much more Godly and pro-family culture back then as compared to the anti God and pro evolution culture we live under today. But the bottom line is they were still sinners.

Today we exalt Americas Founders as the greatest hero’s since the Patriarch’s of the Old Testament.

Actually the Patriarch’s were big sinners but they were believers and saved by the grace of God (Hebrews 11). However they were hero’s of faith though. God used the Patriarch’s in spite of their sin to execute His will.

Americas Founders were big sinners as well. Some were saved and some were not.

But the evil one, Satan, was working back then as he is today to centralize government to create world government.

A constitutional convention would provide a golden opportunity for the globalists to reign in world government. Let’s stop this convention from happening and work to get the New World Order out of America.