Anonymity and the Wimpiness of the Internet Troll 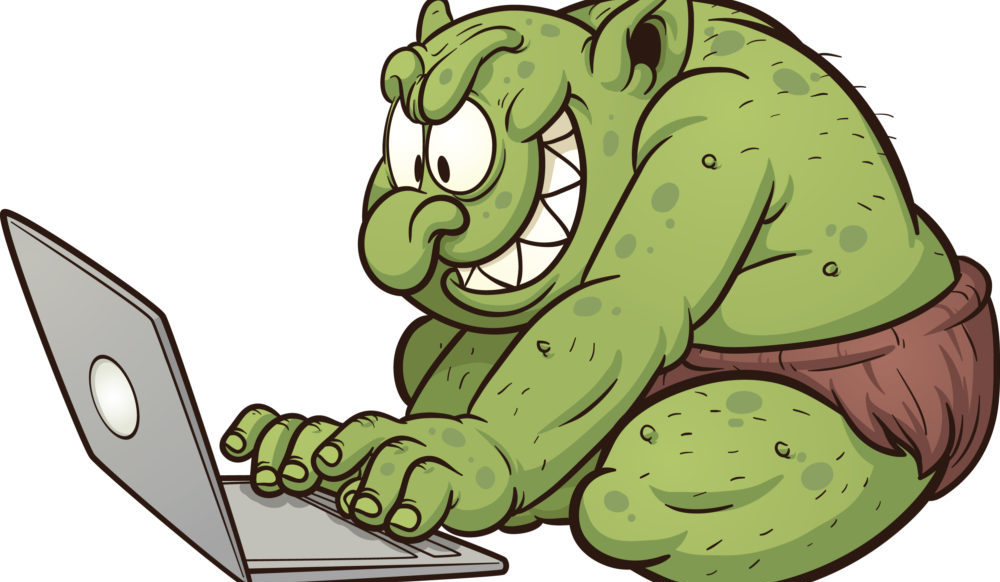 Many bloggers have experienced the “mouthiness” of the anonymous responder who makes arrogant remarks mostly of criticism and/or dissertations of hot tips, sales gimmicks, etc.  Here is a little insight into the mentality ( or lack thereof ) of these creatures that are not proud enough to sign their name to the slop they spit out.  Taking pot shots without identifying yourself is missing the key ingredient of credibility.  If one cannot be truthful about their identity how can anyone take them seriously?

There are people who want to get away with all that they can and anonymous is one of those.  They don’t want to be held responsible for their opinions but they want to spout them as if the words without an author’s name have some power of their own. When you sign your name you express your view that freedom of speech is something you are aware of and there is nothing to fear from expressing your thoughts no matter who you are.  But if you refuse to sign your name there is something you’re trying to hide ( namely yourself).

The central thrust of the anonymous writer is fraud.  They want to attack without giving anyone the opportunity to rebut their blather.  They want to intrude by taking advantage of your invitation for comments.  Criminals are prone to be anonymous because they know if they are identified for what they are there are consequences they will have to face.  Anonymous writers infiltrating blogs are no different.

You will notice terrorists are another group that hides their identity.  They wear a mask that covers their face so that no one will identify them and hunt them down.  A smart aleck anonymous responder would face the same fate and therefore they hide behind the mask of anonymity.

If you want to target someone the fair approach is to let the person know who you are and why you disagree.  You may get a wimpy anonymous responder but such cowardliness can be dismissed and deleted as it has no value.

While we’re discussing anonymity there is also the zealot who sends religious propaganda unsolicited though the mail and then hasn’t the decency to be honest enough to identify themselves.  How can you think they are proud of a message they won’t openly acknowledge to be the sender of?  These wormy little varmints need not think their unsolicited nonsense is either welcome or read.  If one doesn’t want to be known they are hiding something.  What that something is is the courage to stand up for themselves.  Like a graffiti hound they work in the dark and voice opinions designed to belittle and criticize without facing any criticism themselves .  This is like playing a game of chess and knowing you will never be able to claim victory no matter how good a player you are.

So what motivates someone to spout an opinion and then cower at the thought of being held accountable for it?  It can only be fear.  Fear of attaching one’s name to what would easily be identified as a poor argument and a cheap shot.  An anonymous responder cannot have any intellectual honesty and has to hide behind the word that means “ I don’t want you to know who I am when I criticize you”.  In reality there are no anonymous people.  Everyone has a name and only the cowards want to keep it secret when they can’t stand behind their rants.

And what gives the anonymous advertisers the idea that they can respond to a blog with an ad that has nothing to do with the thought process expressed?  Like the wimps that smart mouth behind a curtain these toads are presumptuous enough to think they can exploit by just tossing at random unsolicited spam.  These are the something for nothing slugs that have no idea what courtesy is or how to practice it.  Dumping garbage on the neighbor’s lawn is the equivalent of placing diatribes of advertising on a person’s blog.  And of course they hide behind their unknown identity which assures you they know they are doing something wrong and hope they won’t get caught.

These parasites have chosen a way of life that won’t work.  They gain nothing by their inserts and they only have the satisfaction that like peeping toms they may not get caught.  The truth is they are a common group that needs no name and has no influence.  Like a fly they are only an annoyance and if this is what they seek it tells you what worth they have.