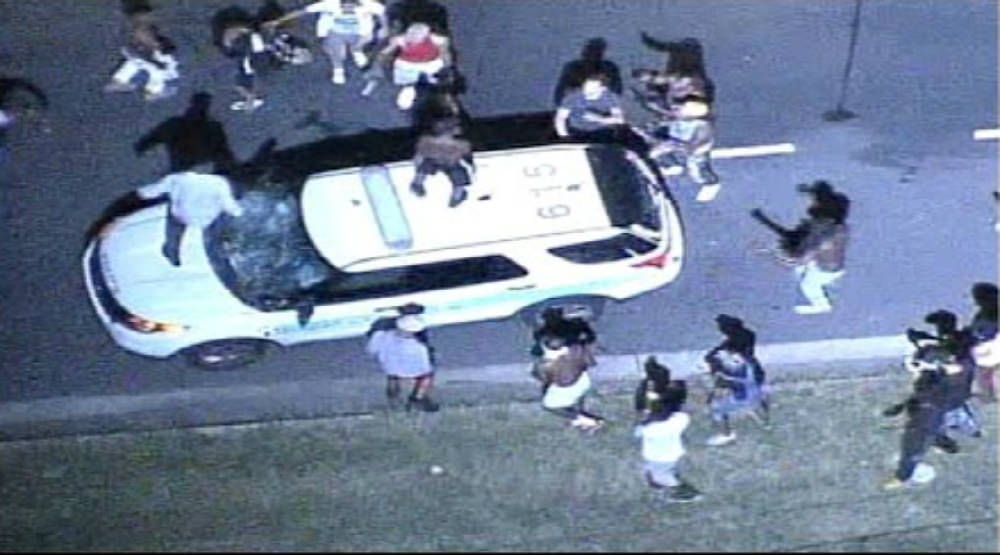 Once again at Berkeley, it was shown to the American people who the real Nazis are. In a fit of childish outrage, a group of about 150 people with the faces covered created chaos on the campus. Starting fires, beating Trump supporters, destroying ATM’s, and even pepper spraying one lady who they felt might be a Trump supporter just for wearing a red hat is just showing how intolerant the “tolerant opposition” really is. It is nothing more that normalizing violence in the agenda to meet the ends the progressive/socialist want.

My family came to the United States in 1934 from Czechoslovakia. They saw the degeneracy, the intolerance a small minority of low IQ pedophiles and immorality that had become the culture of the true Nazis of the time.  Speaking far and wide and abetted by a socialist media they talk to the need of “social justice” “white privilege” and “revolution”. What they really want is a degenerate world made to their liking.

The media, complicit in anything that will bring down Trump is facilitating the damage being done to our culture and the damage to property and victims of their riots. San Francisco papers,  even this morning, are calling these peaceful protests even as the country has seen the pictures and knows better. They do not mention the fact that was shown in videos that rioters threw bricks and fired fireworks at the police, threw red paint on Trump supporters and lit a generator and light pole that the police had brought in on fire. They smashed windows, burned cars , and have called for the deaths of any Trump supporter or in the case of one Portland teacher associated with the Black lives Matter movement called on white to give to blacks all the property, money and houses in the possession of any white.

And then there is the latte sipping, ignorant, gated community living celebrities who think the are so politically in tune with America. Self important fools like Judd Apatow tweeting that this is just the beginning and adding “When will all the fools who are still supporting Trump realize what is at stake?

Hey  Judd Boy. We do realize what is at stake. Get out of your cushy little area where all you do is talk about revolution over dinner at your favorite café and go out and work for a living. Get your hands dirty in Middle America where people actually work hard every day to make a living for their family. Those are the “real” people who know what is at stake. Your degeneracy and culture of drug use and pedophilia in Hollywood, you attitude of being better than the so called unwashed masses and looking down your nose at anyone not part of your clique would be an awakening of epic proportions. After years of lecturing the right about dangerous rhetoric that causes violence and blaming every act of violence on the right, at least until it was proven most attacks were by progressive/socialists, these same people are openly advocating violence in our entertainment, in our politics and in our classrooms. Gone are the days of reasonable debate, call discussions of alternative viewpoints, and  respect.  The individual has become expendable to the progressive agenda

Lexi Alexander, another filmmaker of low intelligence declared “punch a Nazi, riot when your college invites a Nazi and set it all on fire. Acting like a true Nazi, and not allowing those of a differing opinion to speak and truly what Naziism looked like.  It is informative that most of those in Hollywood will speak out about how terrible our country is, and how much white people have destroyed it, look down their noses on non-Hollywood types and speak of how ignorant they are. How many of you have ever read the Constituion, or the Bill of rights, or even have idea about how government works? She makes a declaration that in case you doubt you should study History. If you do you will find that Lexi, Judd, and the rioters are acting just like the brownshirts of 1936-39. You want us to read History? Some of us already have, and some know people who have lives through the second World War. There is no difference between the anarchists and the sycophants that back them like you and the Gestapo of the second  World War. I suppose you think you will survive the chaos you create, but you need to understand that there are enough patriots in this country to assure failure and those causing the anarchy to be help personally responsible. So please quit calling others Nazi when you are the epitome of what the Nazis were. I would not be surprised if you and your ilk learned the steps to take from George Soros, a Nazi collaborator.  After all, it has been proven that Soros is financing the rioters.

And then there is David Harbour called for punching people who he feels are disenfranchising people to loud ovations from the crowd. By  that he means those that the majority of the people in this country should work for a living and not just get a handout. He made quite a thunderous speech about accepting freaks and outcasts and those who have no home. Hey David, how about you take them into your home, your city. Think that will happen. He speaks of casual violence, but what was Berkeley if not casual violence? He speaks of heart, and soul, and joy and then calls for punching people in the face. Sir, you are a hypocrite, like much of Hollywood. Where is the closest homeless shelter to you, where are the nearest refugees to where you live, have you helped them, have ANY of you in Hollywood helped them? And I mean personally, not just throwing a pittance of your millions in their direction to some group.

There have been others who have called for violence against those that disagree with the progressive/socialist way of thinking. The agenda is all that matters, and it starts in the halls of Congress with Democrats boycotting hearing and SAN FRAN Nancy Pelosi going on a rant about the nomi8ness for the Supreme Court, stating this if you breathe, eat, need medical help this man is a danger. Such stupidity can only take place in someone elected in San Francisco. Of course, there were no examples to back up this diatribe, because there are none. But your Democrat party doesn’t care if it isn’t true, they will blather it enough so that low information voters and those on the dole will believe it, aided and abetted by a socialist media. This is the same media that justifies violence against Trump supporters, and has since the election, because they believe them to fascists, a term lightly used by these people with no idea of its meaning. Being in the pocket of the progressives/socialists that continually find anyone who disagrees with them as being eligible to have their rights violated.  How long before these upstanding members of the Weimar Republic and their toadies in the media proclaim that all anarchists and rioter are beneficial to our country and they should actively go looking for the” Nazis” on the right? And what right does anyone have to demand that CEO’s of any company make known where they stand in politics? Kara Swisher, executive editor of Recode is doing precisely that I order to let the progressives know who the target of their destruction must be.

Hitler would be proud. George Soros learned his lessons well. The anarchists have the media, entertainment and academia under his control.

There will be violence in the future. Both the media and the anarchists will attempt anything they can to destroy this government and the culture that has made America what it is today.

The anarchists who created Berkeley and will create more violence must be stopped. They must be jailed, they must be prosecuted with domestic violence and incitement to riots. They should receive a jail sentence as long as legally possible. And those responsible for this incitement such as Janet Napolitano and chancellor Nicholas Birks should be jailed as well for creating an atmosphere where something like this would happen.

Something needs to done. There needs to be a way found to end the violence and get back to reasonable discussion over disagreements. I hope it happens soon. It probably won’t because the progressives/ socialist think the only way to win is through violence, and those in the Democrat Party are aiding this violence with all the talk of “Trump is Hitler” and obstructing all paths to a better understanding through slandering those that do not agree. After all, that is where the anarchists learned what they are doing now. All they are doing are turning people away from the Democrat party. Let’s hope that a way can be found to find a common ground before real bullets start to fly.