An Assumption of Dignity 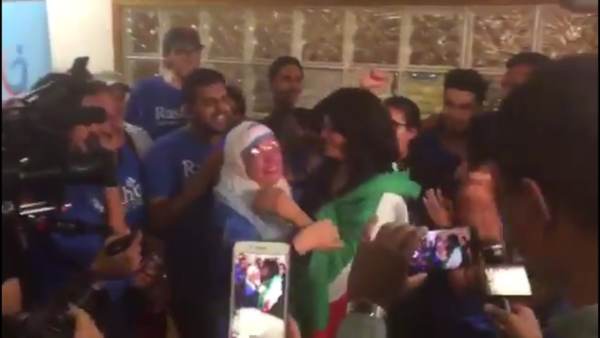 Rashida Tlaib, the Muslim congresswoman who proclaimed that she feels more Palestinian than American in Congress, and wrapped herself in a Palestinian terrorist flag at her victory party on Friday, May 10, proudly declared, “There’s always kind of a calming feeling, I tell folks, when I think of the Holocaust.”  We were deeply offended but not surprised as she had already revealed her lack of empathy for the tragic suffering of so many millions of innocents because she was raised in a culture of disrespect, contempt, bloodshed, and death. The Hebrew Commandments mandate respect and reciprocity (The Golden Rule), and the Hebrew and Christian Bibles were able to humanize the savages that had existed previously, while the Koran commands that Muslims torment and kill Jews, Christians, and others unless they convert to Islam (2:120; 3:56; 3:85; 3:118; 3:178; 5:14; and more).

Tlaib added, “When I think of the Holocaust, and the tragedy of the Holocaust, and the fact that it was my ancestors — Palestinians — who lost their land and some lost their lives, their livelihood, their ‘human dignity,’ their existence in many ways, have been wiped out, and some people’s passports.”  Clarification is required here.  The “tragedy of the Holocaust,” in her view, is that there were sufficient Jews who survived the Holocaust to re-establish their ancient homeland, Israel!  As for the Arabs who “lost their land and livelihood,” they left their homes based on a hollow promise that they would return when the five Arab armies defeated and eliminated the Jews.  Life presents choices, and the Arabs who chose to leave (fewer than 750,000) not only forfeited their homes but were also treated as outcasts by their own brethren, never being absorbed into the huge Islamic landmass.  They were also held as bargaining pawns, neglected by their own so that the United Nations took on the responsibility of their subsistence.  The Arabs who stayed in Israel are the grandparents of today’s Arab Israeli citizens.  Unlike their Arab counterparts, the Jews (~850,000) who fled persecution in Arab lands were welcomed and absorbed, primarily into Israel, but also into Europe and the US.

So, the “outcast” Jews and the “outcast” Arabs had the same time, land and climatic conditions to create a home where they were, but the difference is “inherent dignity.”  Out of malarial swampland and desert, the Jews worked tirelessly to build a successful, thriving country, today among the most advanced in the world, whereas the Arabs, now-named “Palestinians,” continue to this day to wallow in victimhood and world pity, teaching their children to do the same, and extending their hands for additional “humanitarian” aid. Dignity is inherent, or it is not.

Let’s correct some intentional misinformation.  The Jews are the indigenous people in what is now Israel.  Israel became a nation in 1312 BCE, two thousand years before the rise of Islam, and two decades after the establishment of the modern Jewish State of Israel (1948).  The Hebrews conquered the land in 1272 BCE and held dominion over it for a thousand years with a continuous presence for the past 3,300 years.  Arab refugees in Israel began identifying themselves as Palestinians in 1967, after losing yet another aggressive war against Israel and needing a fallacious narrative on which to establish a tie with the land.

Arabs dominated the land for only 22 years, their brutality and persecution so severe as to force the Jews to flee.  The Arabs refused to absorb or integrate Tlaib’s people; they desecrated Jewish holy sites and the ancient Jewish cemetery on the Mount of Olives; destroyed 58 Jerusalem synagogues; and enforced an apartheid-like policy against the Jews, until they once again attacked and lost to Jewish determination.

Israel’s area is about 0.18% and its population about 2.5% that of Arab countries.  Had the Palestinians the quality of inherent dignity, the Arabs would have also accepted the Mandate of Palestine with the opportunities of establishing a viable, humane, literate, prosperous, happy country.  They had the same climate, soil, and time that the Jews had, and Israel offered them more opportunities than were ever bestowed on them by an Arab ruler. They chose continuous war instead.  The “Palestinians” didn’t lose dignity; they refused dignity.

Human dignity is defined as the right of a person to be valued and respected for his/her own sake and to be treated ethically.  It is of significance in morality, ethics, law, and politics.  It is also used to describe personal conduct, as in “behaving with dignity,” and it cannot be taken from anyone.  To Tlaib, it means self-absorption; to the Western world, it is moral, ethical conduct.  To Tlaib, it is something that gives one a right to demand one’s own way, regardless of actions; to the other, it is a responsibility that demands appropriate actions.

We see dignity in the Israelis who have to reverently gather body parts after a Palestinian blows himself up in a crowd and in the first responders who rush to help countries deal with natural disasters.  It is found in researchers who dedicate their lives to advances that benefit mankind (of the 900 Nobel prizes awarded, at least 20% were presented to Jews, although Jews comprise a mere 0.2% of the world’s population.) it is found in people who lovingly tend sick animals, and in the Israeli surgeon who performs his best, whether for an Israeli or Palestinian patient.  And it is in the President of the United States, President Trump, who visits or calls to offer condolences and compassion to parents of a victim of terrorism.  Dignity is not the rants of disdain by an ungracious congresswoman against the country that gave her refuge from tyranny and poverty or against its President who was enthusiastically and legally voted into that office.  Authentic dignity cannot be found in shari’a-ruled regimes because the Koran denies full dignity to at least 50% of their population for no other reason than that of gender.

There is no dignity in those who burned acres of land and wildlife in Israel; who created the dangerous no-go zones of Paris; who burn cars and destroy property in Malmo, Sweden; who attack Jewish pedestrians and mass-rape girls and women in Germany; who massacred fisherman and farmers in Nigeria; who slaughtered villagers in Chad; who killed Christians in Syria.  There were 133 attacks, 822 killed, 1374 injured, 16 suicide blasts in 24 countries in April alone!  Seventy-five attacks, 348 killed, up to the 14th day of Ramadan; nine hundred sixty million murdered over 14 centuries.  When Tlaib and others demand their right to dignity, they are simply insisting that we respect the Indignity that they feel free to heap upon the rest of us.  No deal.

Islamic contempt for certain groups did not begin with their treatment of non-Muslims but among their own people.  Girls are forced to undergo Female Genital Mutilation and forced into a marriage with older men; women are treated as having half the value of men, and are subjected to stonings, beatings, and acid attacks if they are suspected of “sullying” a man’s “honor” or “dignity.”  Where is the dignity and morality in intentionally positioning women and children at rocket launchers to increase the body count for world pity?  What other culture teaches their young to behead small animals so that they may later behead humans without hesitancy, and sends them on suicide missions?

Rashida Tlaib is a jihada, raised to disrespect all life, and that calming feeling that she feels when she hears of the Holocaust reflects the exposure to violence and criminal behavior inbred since her toddlerhood.  Since the 1970s, researchers have begun reporting that childhood cruelty to animals is the first sign of delinquency, violence and criminal behavior, and Muslims continue the unimaginable torture and cruelty to livestock as the animals are brought to slaughter for the Islamic holiday of Eid al Adha – further proof that their ideology has produced a society that is on the opposite end of the behavioral spectrum to ours.  Apparently, in this case, the dignity of human beings gives them the right to be cruel to animals that, in their philosophy, lack dignity.  For the record, Judaism demands kindness and sensitivity to animals, to prevent suffering, to feed them before we feed ourselves, and to allow them a day of rest in the week (the Sabbath).

The raison d’etre of Palestinians is, in fact, not to have their own state, but to have the entirety of Israel as their own state, with shari’a as the law of the land.  It carries on the conquests of Mohammed, just as we see Muslims gaining control of cities and parcels of land in Southeast Asia, Canada, England, France, Germany, Sweden, and the United  States, aided by the Marxist left.  Tlaib’s purpose, along with Omar and others in office, is to gradually impose shari’a law here, with the not-so-subtle coercion from the Council on American Islamic Relations (CAIR).  The background of centuries of violence, conquest, beheading, bloodshed, and enslavement is what drives Tlaib’s lack of dignity, empathy, compassion, and respect for the suffering of others.  In reality, disrespect is the cornerstone upon which Islam in general, and the Palestinians in particular, have found their existence.