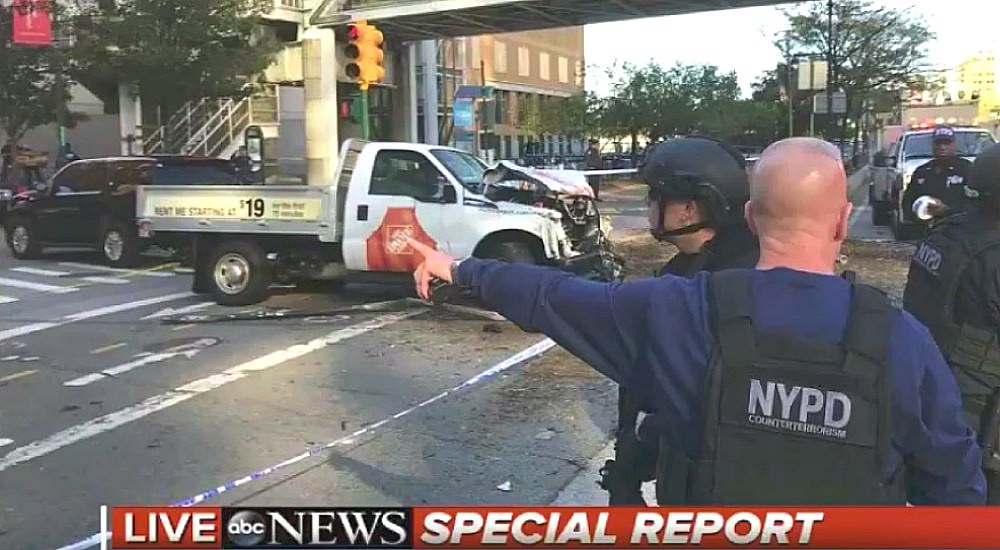 On Halloween, Manhattanites were “treated” to actual horror. Only blocks beyond ground zero and the shadow of the World Trade Center, the worst terrorist attack since 9/11 occurred. Weaponizing a Home Depot rental truck, a Muslim immigrant, suspect Sayfullo Saipov, 29, killed eight innocents and badly injured a dozen more. Also at the nexus of the accompanying political firestorm is Senate Minority Leader Chuck Schumer (D-NY). He was instrumental in crafting the diversity visa program that enabled Mr. Saipov to arrive stateside legally in 2010. Furthermore, perhaps foreshadowing the future carnage, this native of Uzbekistan’s first name has a close association with the meaning: “sword of Allah”.

In retrospect, is it any surprise that a bad U.S. immigration policy was grossly exploited by an adherent to radical Islam? Defining Sen. Schumer’s involvement is Neil Munro of Breitbart:

“The diversity visa program was created in 1990 by then-Rep. Schumer in response to Irish lobbies in his New York district. Twenty-seven years later, it annually awards 50,000 visas by annual lottery to entrants from around the world, ensuring a cascade of subsequent chain-migrants.”

Like a philosophy straight out of “Charlie and the Chocolate Factory,” this is a randomly awarded golden ticket to a foreigner regardless of that person’s background. It gifts the holder a green card, and permanent residency in the United States. Plus, lucky’s nuclear family—and distant relatives can emigrate too! After all, such good fortune should not divide families. (Incidentally, this is the same narrative echoed by illegal migrants with U.S. anchor babies.) Ah, the destructive domino effect of lax previous administrations on full display!

In the 21st century, think of the Immigration Act of 1990—signed into law by George H.W. Bush—as America’s version of Russian roulette. For, in practice, that’s what this law has metastasized into. To his credit, even Mr. Schumer recognized this truth back in 2013. Then, he among a bipartisan Gang of Eight passed an immigration overhaul that would have ended the Diversity Immigrant Visa. Unfortunately, the move failed to advance in the House. Yet, even if the measure had reached President Obama’s desk it seems a reasonable certainty that it would not have been signed. Given all of these facts, one is mystified why President Trump has antagonized Mr. Schumer in this instance. After all, wouldn’t this latest attack on NYC further incline the minority leader to align himself with Trump’s desire for a merit-based replacement?

At present, that’s not a question that can be sufficiently answered. However, what can be addressed is how ill-conceived this random green card lottery system is. Per Pew Center, 19 million applicants from around the world have taken a spin on America’s wheel of fortune for fiscal year 2017. (Moreover, in the last decade, an astonishing 156 million have similarly rolled the dice.) What’s available yearly is 100,000 chances for the U.S. to extend the welcome mat to perfect strangers with no loyalty to, or cultural appreciation of, American values. Of the 50,000 selected, the vetting process is apparently as vigorous as getting hired to work at McDonald’s. To qualify, the individual must have a high school diploma, and two years of work experience in an occupation that requires at least two additional years of training or experience. Fill out form I-485, the Application to Register Permanent Residence or Adjust Status; a brief interview; an official rubber stamp—and you’re in like Flynn! For all the sense this makes, the government should have nicknamed this highly valuable commodity the slacker’s visa. In that regard, the loved ones of the NYC victims undoubtedly have more colorful descriptors for this now detestable policy.

In any case, as the October 31st tragedy has clearly demonstrated, radicalized Islamic proponents are hidden among those admitted into the U.S. Since they are invisible, we must consider past experience as a guide. Therefore, a trend articulated by Alex Nowrasteh, of the Cato Institute, comes to bear. In “Terrorism and Immigration: A Risk Analysis,” he wrote:

“Foreign-born terrorists who entered the country, either as immigrants or tourists, were responsible for 88 percent (or 3,024) of the 3,432 murders caused by terrorists on U.S. soil from 1975 through the end of 2015.”

Likewise, one must consider the larger, visible group that contains them. Recall that Muslims comprise 1% of the total U.S. population (per the Pew Center’s 2015 figures). Based upon a total population then of 322 million people, that’s still 3.2 million people. Also consider that 1 million people have gained residency in the U.S. annually since 1990 via chain migration of extended relatives (see: NumbersUSA.com). So, what’s likely to happen to the homeland’s Muslim population in the future? This is Pew’s prediction:

“Indeed, even before 2040, Muslims are projected to become the second-largest religious group in the U.S., after Christians. By 2050, the American Muslim population is projected to reach 8.1 million people, or 2.1% of the total population.”

Naturally, one does not intend to impugn an entire community for a few bad apples. Yet, a legitimate concern remains: a small number of the radicalized have caused mass-casualty truck attacks in London; Berlin; Barcelona, Spain, and Nice, France. Clearly, a first step is to finally abolish, and replace, the deeply flawed 1990 immigration law forthwith. The unacknowledged monkey wrench in this debacle is the wrongheaded application of “high-admission regions” and “low-admission regions”. If the invited do not provide, for example, a needed skill set what’s the point of further diversification of legal migrants? Just for the heck of it? By definition, a large immigration population inherently diversifies an established culture. In fact, by a wide margin, America already accepts more immigrants than any nation on earth. Thus, diversity has already been automatically achieved without all of the unnecessary—and risky—human geo-political gerrymandering!

A vital second step is to linguistically distinguish diversity from multiculturalism. Liberals intentionally use the words interchangeably to muddy their meanings. In truth, they actually represent opposing concepts. Specifically, diversity means the general acceptance of differences—whether they be physical, psychological or behavioral. That’s the warm embrace of America’s vulcanizing “melting pot”. Hence, the U.S. motto of unity: e pluribus unum, Latin for “out of many, one.” Contrarily, multiculturalism is the rejection of Americanism. Like identity politics, it promotes the idea that assimilation to our constitutional ideals—freedoms enjoyed by all—is somehow repressive. Furthermore, it’s the nonsensical idea that society at large should shift itself to pacify even one objector. Witness its (justified) effect on the shadowy and corrupt industry that is Hollywood. A volcanic grievance culture is currently shaking the dream factory’s power structures apart. Hasn’t America’s dysfunctional immigration system, and radical Islamic terrorism done even greater damage? The confluence of both instantly invokes Shirley Jackson’s short story “The Lottery.” In it, lots are drawn and the unfortunate winner is stoned to death. Those encountering the “sword of Allah” in NYC on Halloween met an equivalent malevolence.