250 years ago, this past July, John Quincy Adams was born.  That in itself is noteworthy, but that particular person happened to be the American President at the time the Barbary Pirates were at the height of their escapades.   Contrary to popular thinking at the time, Adams was a staunch opponent of slavery, and that trade was in full flower at the time.  It was worth a person’s life to be just about anywhere in the Mediterranean Sea while the Barbary Pirates were working.   There was a slave ship called the Amistad which had a slave rebellion on the high seas, and this Adams argued the case for the slaves.  The United States Supreme Court ruled in the slave’s favor.  Although Martin Van Buren was among those who favored extraditing the Africans to Cuba, they were eventually allowed a trial, and a federal district court judge ruled they were not liable for their actions.

Adams was not reticent about putting down on paper his thoughts about, as they were then called, “Musselmen”.  Adams had the following to say about Islam: “The natural hatred of the Mussulmen towards the infidels is in just accordance with the precepts of the Koran…”  One sentence in particular stands out in his commentary about the Islamic ideology. And boy, it is hard-hitting…“In the 7th century of the Christian era, a wandering Arab … spread desolation and delusion over an extensive portion of the earth. … He declared undistinguishing and exterminating war as a part of his religion. … The essence of his doctrine was violence and lust, to exalt the brutal over the spiritual part of human nature.”

To be sure, there were other Presidents who became embroiled with the pirates.  Among them were George Washington, John Adams, Thomas Jefferson, and James Madison… all exercised their power to deal with the threat posed by the pirates before Madison was eventually able to declare victory against them.  It was the end of the eighteenth century, and for hundreds of years, pirates from the Islamic countries on the coast of North Africa had controlled the Mediterranean Sea. They plundered and looted ships. They captured sailors, holding them for ransom or selling them into the Ottoman (Turkish) slave trade. These pirates considered themselves at war with any nation with which they did not have a “treaty.” In fact, these “treaties” were demands for “tributes:” payments to prevent attacks.

Trending: Facebook’s Mark Zuckerberg – A Legend in His Own Mind!

Having declared independence from England, America no longer had the protection of the British fleet, then considered the biggest and best in the world.  In 1794 Thomas Jefferson, who was George Washington’s Secretary of State, recommended a war with, and on, the pirates.  Congress, even back then, was rather spineless, and said no.  When John Adams became President in 1797, he continued paying the pirates. Congress continued to authorize payments. By the turn of the century, Congress was paying twenty percent of the US’s annual revenue to the pirates.   President Thomas Jefferson took office in 1801.

Jefferson was cut from different cloth, and was not agreeable to keep on bribing pirates not to imprison American sailors, and then having them imprisoned anyhow.   He announced that there would be no more tributes paid. Tripoli demanded a payment of $225,000 on top of annual payments of $25,000.  Jefferson refused to pay, and Tripoli declared war on the US.   In his first of what we now call the State Of The Union address he said,  “Tripoli, the least considerable of the Barbary States, had come forward with demands unfounded either in right or in compact, and had threatened war, on our failure to comply before a given day. The style of the demand admitted but one answer. I sent a small squadron of frigates into the Mediterranean.”   He did this without a formal declaration of war from Congress, but later secured their permission.

Congress passed the “Act for Protection of Commerce and Seamen of the United States against the Tripolitan Corsairs.” This act authorized an expanded force to “subdue, seize and make prize of all vessels, goods and effects, belonging to the Bey of Tripoli, or to his subjects.”   Years later in 1815, President James Madison sent the navy to the Barbary Coast once again. The phrase “to the shores of Tripoli” from the Marine Hymn refers to this historic battle. Madison eventually declared victory against the pirates in his Seventh Annual Message to Congress.  Jefferson ordered a naval expedition to the Mediterranean, resulting in the First Barbary War (1801-1805). In the war, Tunis and Algiers broke their alliance with Tripoli. For four years, the U.S. fought with Tripoli and Morocco. The battles were mostly naval, including Lt. Stephen Decatur’s daring raid on the Tripoli harbor to demolish a captured American ship, removing it from enemy hands.

According to Robert Davis in “Christian Slaves, Muslim Masters,” from 1530 to 1780, over a million Europeans were captured and sold as slaves by the Barbary powers.  Slavery is still a thriving industry in that part of the world and Muslims are the biggest slave-traders.  To most Americans, when slavery is mentioned, thoughts immediately fly to the American Civil War, aka The War Between The States…and popular belief is that slavery was the reason for the war.  It wasn’t.  The main reason was the question of state’s rights versus the Federal government.

Parting shot: History cannot be erased or changed. It is. 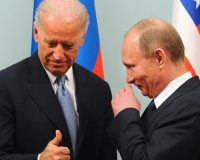 Chelsea Clinton Wants Tucker Carlson Banned From Facebook (But She’s Making Up What He Said)
April 15th, 2021 The Lid