America’s Immigration System is NOT Broken – Democrats Are! 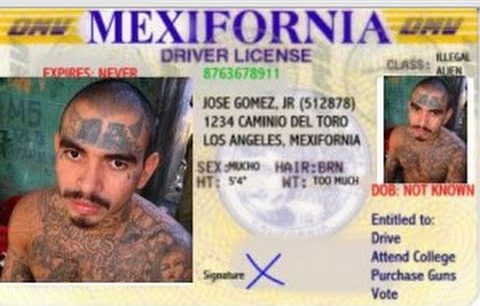 Democrats violate Constitutional law to put citizens in danger and then campaign as if they were Republicans in favor of strong American law.  Giving people who are in the country illegally is not only open rebellion, but treason to the American citizen.  These Democrats must be arrested, and their massive voter fraud campaign crushed!  This is no joke!

Sanctuary states cannot be allowed to have elections allowing illegal aliens casting votes to overrule the rights of American citizens.  California et al are doing this to give their fascist Democrats power when the people would remove them.  This isn’t just illegal, it’s treason, and the federal government needs to step up and haul these people into to courts on their way to prison and replace them until the citizenry can elect their replacement.

Democrats giving illegals the vote in cities across the country

Democrat mentality over immigration is completely two-faced in that they want foreigners who are in the country illegally to vote in elections, yet they cry and moan in their delusional belief that Russia somehow voted illegally in the last election.  It’s sick and demented for them to condemn foreign interference in elections by their fantasy Russians while advocating for Mexicans and Moslems to cast votes in a country they hate.  But what do you expect of people who slander those who have faith in Christ yet believe they represent the godly?

Democrats lie about everything.  They smear Trump as evil and destructive while he is bringing back trillions of dollars and jobs that Democrats have forced overseas to escape their confiscatory taxes.  They always portray the righteous as evil, inept, and petty to hide the fact that conservative Christianity is what makes America great.  Their Hollywood cronies slip their propaganda into movies and television shows to warp gullible minds.  Democrats, like Oprah, Winfrey one of the Left’s cult heroes, stripped away Christianity from her latest movie.  When VP Pence declared that he prays to God and acts on answers he receives he was mocked by the likes of Joy Behar on The View as being mentally ill because “he thinks Jesus talks back to him.”  When Oprah said she prayed about whether she should run for president in 2020 and was waiting for an answer she was lauded by the Left.  This begs the question; to what god does she pray that the Left approves?  She didn’t mention Jesus.

Oprah strips Christianity out of movie adaptation of Christian story

Oprah and Colbert mock God on the Late Show