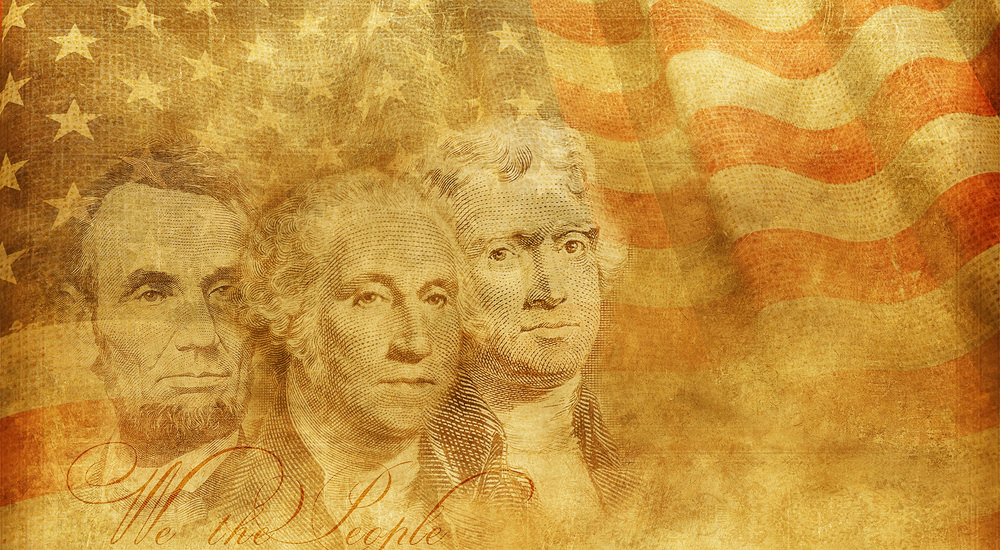 As we continue to look at the concept that we have been taught for decades that our Founders were atheists and anti-religious demanding that religion be kept out of public view at all times in all forms, all we really have to do is go to Washington, D.C. and look at the buildings.  Carved in the stones that make up the buildings are scriptures and references to God on every building.  Looking at the records of Congress we see documented prayers that were said daily with the ending of the prayerbeing in the Name of Jesus.  The concept that they were non-religious is simply not provable in any way.  All documented evidence proves the opposite.

As I stated before if this really was their intent we would see it in their laws, their writings even in their constitutions.  The Founders who held political office would never have called for prayer as a representative of the State government.  There would be a direct mention in the State constitutions forbidding any religious activity in the public arena.

The Continental Congress would have never allowed prayer for the Congress if what we are told by today’s courts is true that the separation of church and state must be impregnable.  But there are many instances when the Congress called for prayer and fasting before and during the Revolutionary War.  It is all documented.  On September 7, 1774 it is recorded in the Journals of the Continental Congress that they invited a Reverend Jacob Duche to open the first Congress with prayer:

Wednesday, September 7, 1774, 9 o’clock a.m. Agreeable to the resolve of yesterday, the meeting was opened with prayers by Reverend Mr. Duche.  Voted, that the thanks of Congress be given to Mr. Duche . . .  for performing divine service, and for the excellent prayer, which he composed and delivered on the occasion.1

Here is a documented description of how that first meeting of Congress unfolded.  Remember that these are the atheist and agnostic men today’s historians tell us about:

Washington was kneeling there, and Henry, Randolph, Rutledge, Lee and Jay, and by their side there stood, bowed in reverence, the Puritan Patriots of New England, who at that moment had reason to believe that an armed soldiery was wasting their humble households.  It was believed that Boston had been bombarded and destroyed.

They prayed fervently “for America, for Congress, for the Province of Massachusetts Bay, and especially for the town of Boston”, and who can realize the emotion with which they turned imploringly to Heaven for Divine interposition and – “It was enough” says Mr. Adams, “to melt a heart of stone.  I saw the tears gush into the eyes of old, grave, Pacific Quakers of Phiadelphia.”2

If these men be atheists then they need to explain the recommendations for seal and motto by the two least religious men of the Founders.  These are the two that the revisionist historians like to site as proof of our Founders being non-religious.

Benjamin Franklin:  Moses lifting up his wand, and dividing the Red Sea, and pharaoh in his chariot overwhelmed with the waters.  This motto: “Rebellion to tyrants is obedience to God.”3

Thomas Jefferson: The children of Israel in the wilderness, led by a cloud by day and a pillar of fire by night.4

On September 11, 1777 the Continental Congress approved and recommended that 20,000 Bibles be imported from other nations in Europe.  Up to that time the only Bibles allowed were what England supplied, the 1611 King James Version.  The war with England stopped that supply.  The Congressional Committee reported:

The use of a Bible is so universal and its importance so great that your committee refers the above to the consideration of Congress, and if Congress shall not think it expedient to order the importation of types and paper, the Committee recommends that Congress will order the Committee of Commerce to import 20,000 Bibles from Holland, Scotland, or elsewhere, into the different parts of the States of the Union.

Where upon it was resolved accordingly to direct said Committee of Commerce to import 20,000 copies of the Bible.5

There was another instance concerning Bibles that I want to look at.  On September 10, 1782 another shortage of Bibles came about.  This shortage concerned the public schools.  Today’s courts have take the Bible out of the schools claiming that it is unconstitutional to have Bibles in the school, but the Founders were unaware of that provision.  This edition was for “a meet edition of the Holy Scriptures for use in schools.”  This edition became known as the Bible of the Revolution.  The following Endorsement of Congress was printed on its front page:

Whereupon, Resolved, That the United States in Congress assembled . . . recommend this edition of the Bible to the inhabitants of the United States, and hereby authorize [Robert Aitken] to publish this recommendation in the manner he shall think proper.6

Again this is not an act of men who demand a separation of church and state.  Here the government is buying Bibles to be dispersed to all the colonies for use of the people and for use in the schools.  To think that our Founders established this nation to be free from religion and Christianity specifically is laughable.  When the Constitutional Convention was in process there had been about four to five weeks where no progress was being made in the negotiations of how the States would be represented in the new government.  At this time Benjamin Franklin stepped in and made some comments.  Following is an excerpt from those comments.  Remember that at this time Franklin was 81 years old and Governor of Pennsylvania as well as a very respected man.

“In the beginning of the contest with Great Britain, when we were sensible of danger we had daily prayer in this room for Divine protection.  Our prayers, Sir, were heard, and they were graciously answered. All of us who were engaged in the struggle must have observed frequent instances of a superintending providence in our favor.

To that kind providence we owe this happy opportunity of consulting in peace on the means of establishing our future national felicity.  And now have we forgotten that powerful Friend? Or do we imagine that we no longer need His assistance?

I have lived, Sir, a long time, and the longer I live, the more convincing proofs I see of this truth – that God governs in the affairs of men.  And that if a sparrow cannot fall to the ground without His notice, is it probable that an empire can rise without His aid?

We have been assured, Sir, in the Sacred Writings, that “except the Lord build the house, they labor in vain that build it.”  I firmly believe this; and I also believe that without His concurring aid we shall succeed in this political building no better than the Builders of Babel: We shall be divided by our partial local interests; our projects will be confounded, and we ourselves shall become a reproach and bye word down to future ages.  And what is worse, mankind may hereafter from this unfortunate instance, despair of establishing Governments by Human wisdom and leave it to chance, war and conquest.

I therefore beg leave to move – that henceforth prayers imploring the assistance of Heaven, and its blessing on our deliberations, be held in this Assembly every morning before we proceed to business, and that one or more of the clergy of this city be requested to officiate in that service.”7

Again we see that what we have been told about the Founders in not true.  They were godly men.  Benjamin Franklin may have been the least godly, but even he knew the importance of seeking God’s face in the matters of developing the Constitution.  His recommendation was taken to heart and James Madison moved,8 and Roger Sherman seconded9 that Dr. Franklin’s appeal for prayer be enacted.  Then Edmund Jennings Randolph further moved:

That a sermon be preached at the request of the convention on the 4th of July, the anniversary of Independence; and thenceforward prayers be used in ye Convention every morning.10

It is interesting to note here that prayers have opened both houses of Congress ever since.11

I know that it seems that I am belaboring the point of prayer during the Convention, prayer during the Revolution, calls for prayer and fasting throughout the 13 colonies, but for so long we have been told that this never happened and it should never happen.  We have been lied to by the modern ‘historians’ so much that we don’t even know what our real history is.

If there was to be a complete silence about God in government then He should never be mentioned, at least in a positive light in any government document.  Let’s take a look at a few preambles to some of the States Constitutions”

Connecticut 1818, Preamble. The People of Connecticut, acknowledging with gratitude the good Providence of God in permitting them to enjoy…

Georgia 1777, Preamble. We, the people of Georgia, relying upon protection and guidance of Almighty God, do ordain and establish this Constitution…

Maryland 1776, Preamble.  We, the people of the state of Maryland, grateful to Almighty God for our civil and religious liberty…

Massachusetts 1780, Preamble.  We, the people of Massachusetts, acknowledging with grateful hearts, the goodness of the Great Legislator of the Universe In the course of His Providence, an opportunity and devoutly imploring His direction…

Pennsylvania 1776, Preamble.  We, the people of Pennsylvania, grateful to Almighty God for the blessings of civil and religious liberty, and humbly invoking His guidance….

South Carolina, 1778, Preamble.  We, the people of the State of South Carolina grateful to God for our liberties, do ordain and establish this Constitution.

Vermont 1777, Preamble. Whereas all government ought to enable the individuals who compose it to enjoy their natural rights, and other blessings which the Author of Existence has bestowed on man…

Bill of Rights, XVI: Religion, or the Duty which we owe our Creator can be directed only by Reason and that it is the mutual duty of all to practice Christian Forbearance, Love and Charity towards each other…

Virtually every State references God in a positive way.  Mostly in gratitude for His protection, direction and the liberties that He has endowed us with.  That is not evidence of men who believed that religion was to be kept out of the public eye.  We must return to teaching this valuable history to our children because our public schools no long will.

It is obvious that any separation of church and state was meant to be keeping the government out of the church.  William Penn said it very well when he stated “Those people who will not be governed by God will be ruled by tyrants.”