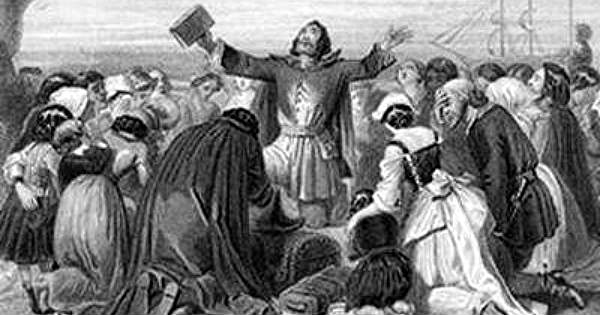 It is very necessary that we discuss, and I believe in detail, the pastors of early America and especially during the time of the Founders.  These were the men that fanned the flame of independence by preaching the principles of Christianity.  Historian B.F. Morris stated: The ministers of the Revolution were, like their Puritan predecessors, bold and fearless in the cause of their country. No class of men contributed more to carry forward the Revolution and to achieve our independence than did the ministers. . . . [B]y their prayers, patriotic sermons, and services [they] rendered the highest assistance to the civil government, the army, and the country.1 Alice Baldwin went one step further when she stated: The Constitutional Convention and the written Constitution were the children of the pulpit.2 (Emphasis added)

These pastors were more than simple people who gave a cute sermon on Sunday mornings.  They were the leaders of the community.  They were the teachers. They carried so much influence in the community that the British labeled them The Black Regiment for the color of the robes that they wore.3  The British even blamed these pastors for the war for independence4 and probably rightfully so as all the rights declared in the Declaration of Independence had been preached from the pulpits of America from long before 1763.5

This fact was also very well known in America as well.  John Adams stated that “the pulpits have thundered”6 and he even talked about some of the ministers that he believed were “characters the most conspicuous, the most ardent, and influential” in the “awakening and a revival of American principles and feelings” that fanned the flames for American independence.7

Many believed that it was solely the part of the pastors that started and finished the fight.   Historian Clinton Rossiter stated: Had ministers been the only spokesman of the rebellion – had Jefferson, the Adamses, and [James] Otis never appeared in print – the political thought of the Revolution would have followed almost exactly the same line. . . . In the sermons of the patriot ministers . . . we find expressed every possibly refinement of the reigning political faith.8 The American Quarterly Register wrote: As a body of men, the clergy were pre-eminent in their attachment to liberty. The pulpits of the land rang with the notes of freedom.9

These men were men of honor and integrity.  They preached that Christians should live in the fullness of God’s Word.  There were sermons on the deity of Christ, on Christmas, on Easter, but there were also sermons on other varied topics that you would not hear preached today such as sermons on bridges [architecture], earthquakes, taxes, elections, even executions.  Whatever was in the forefront of the people’s daily lives, the pastors would address it from a Biblical perspective.   They were always out front in the fight for freedom.  They helped write state constitutions, were the founders of most of our colleges and universities such as Yale, Harvard, Columbia [Kings College], Princeton, William and Mary, Dartmouth, and Rutgers University.  By 1860 there were 246 colleges founded and all but 17 were founded by different religious denominations.  They were the ones taking care of the wounded in battle and even served in state legislatures and Congress.

These pastors were very astute concerning God-given rights and would be very vocal about any attempt of government to encroach in those areas.  They were vocal on things that involved liberty and freedoms and taught constantly about resisting any form of tyranny. Church historian Charles Galloway regarded the pastors of the Founding era to be the pillars of the community.  He declared: Mighty men they were, of iron nerve and strong hand and unblanched cheek and heart of flame. God needed not reeds shaken by the wind, not men clothed in soft raiment [Matthew 11:7-8], but heroes of hardihood and lofty courage. . . . And such were the sons of the mighty who responded to the Divine call.10

Virginia began to be settled in 1606 and included several ministers such as Revs. Robert Hunt, Richard Burke, William Mease, Alexander Whitaker,  and many others.  By 1619 they had formed the Virginia House of Burgess which consisted of elected people from the families of the ‘common’ people.11  This was a new concept in the world at that time.  That new legislature was opened with prayer by the Rev. Mr. Bucke in the Jamestown church.12 Isn’t it interesting that in a nation that the revisionists say was founded by atheists the first government meeting was held in a church and opened with the blessing of the local pastor?13

The pastor of the 1620 pilgrims in Massachusetts, John Robinson, instructed the people to elect leaders who would seek the ‘common good’ of the people and eliminate special privileges and status between governors and the governed.14  This was also a new concept in that day.  They took the concept of electing the people in authority over them and giving them only the powers over the people that the people wanted to give them to a different level by establishing America’s first citizen Bill of Rights in 1636.15

The election of leaders giving them only the power the people wanted them to have became the norm for the Colonies.  When the Massachusetts Bay Colony was founded in 1630 they established a representative style government which elected officials every year16 and by 1641 had established their Bill of Rights called the Bill of Liberties.17  This Bill of Liberties was drafted by their minister Reverend Nathanial Ward.18

In 1636 four pastors founded Connecticut, Rev. Thomas Hooker, Revs. Samuel Stone, John Davenport, and Theophilus Eaton19 and the government they established was a representative style government20 based on the Biblical examples set forth in Deuteronomy 1:13.  Take you wise men, and understanding, and known among your tribes, and I will make them rulers over you.21 And Exodus 18:21, Moreover thou shalt provide out of all the people able men, such as fear God, men of truth, hating covetousness; and place such over them, to be rulers of thousands, and rulers of hundreds, rulers of fifties, and rulers of tens:22

Rhode Island was founded in 1636 by a minister as well.  Reverend Roger Williams also established the representative style government23 based on the idea that “the sovereign, original, and foundation of civil power lies in the people.”24

We will see that Colony after Colony had their governments designed and established by the pastors.