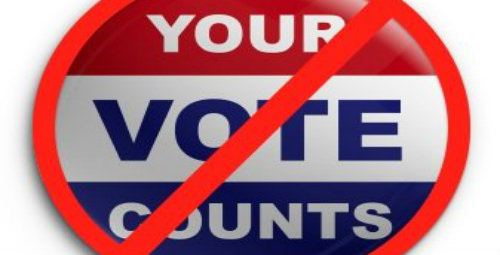 Who will investigate rigged computers and other methods used by Democrats to commit voter fraud; the FBI that exonerated Hillary of corruption?

Reports are already surfacing of computerized voter machines altering votes.  There have already been numerous cases of proven voter fraud in which Democrat pollsters replaced legitimate ballots with their own.  With machines that don’t leave a paper trail, to where do Americans turn for an investigation, let alone a recount?

Democrats are acting like the election is a done deal even though Hillary has always polled less than 50% and there are still millions of people who say they are undecided.  How do you turn seriously Republican states like Utah and Texas into Democrat states?  Easy.  You rig the machines to turn some of the Trump votes into Hillary votes.  Voter ID would stop most of the identity theft that occurs, but it won’t stop computers from false tabulations.

Every election there have been reports of voter fraud that go uninvestigated.  You would think that when the city of Port St. Lucie, FL turned in more ballots than they had registered voters there would be an investigation.  But Republicans didn’t want to challenge America’s first black president lest they be labelled “racists.”

With the FBI acting on behalf of the Democrats to exonerate Hillary of violating national security how can Americans trust them to investigate what the government will not order them to investigate?  When WikiLeaks exposes Obama and Hillary as colluding on her illegal, unsecured server that he says he didn’t know about, but communicated with her over it under a pseudonym because he knew it was breaking the law, yet the FBI and DoJ do nothing, what hope do Americans have of justice let alone a fair counting of ballots by Democrats?  To where do the people turn when government corruption is thwarting the will of the people as they have for the past eight years?