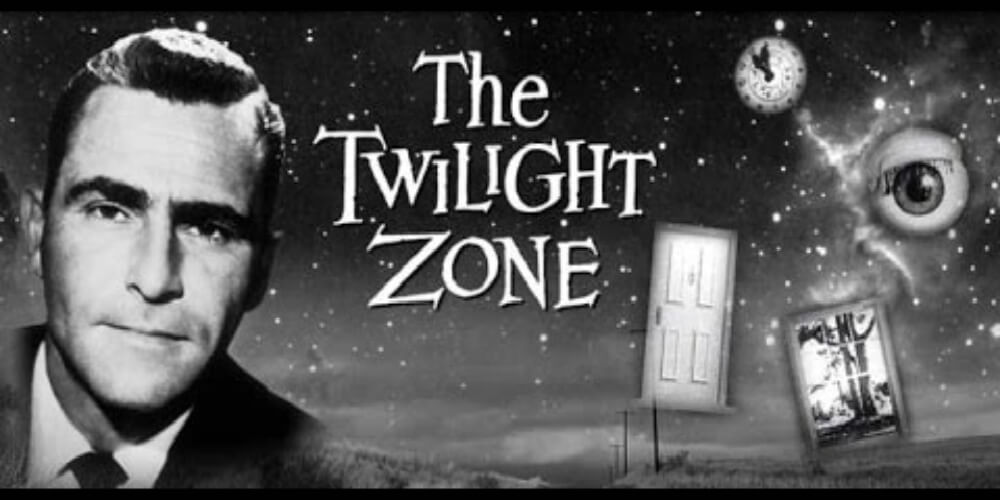 Off the beaten path for a change…

It occurs to me that Rod Serling was right when he opened each episode of The Twilight Zone.  If you think of politics in this country in that light, the words are right on target…You’re moving into a land of both shadow and substance, of things and ideas. You’ve just crossed over into the Twilight Zone.   There are fantasies presented as facts, history that morphs into something unrecognizable, and The Big Lie is repeated over and over again until it begins to take on a factual life of its own.   Although we have a bloodless changeover of leadership, it doesn’t always result in the country getting a better leader.  Down through the years our Presidents have been good, bad, and indifferent, so it’s not as if bad leadership just sprung, full-grown, from the current administration.   Arthur Miller was once quote as saying “there is nothing further away from Washington than the entire world.”

In recent weeks, interesting things have popped up and they’re not all about politics either.  Like many others, some words that I use were thought to be interchangeable are not, and yam and sweet potato are two of them.  Yams have a rough, scaly skin and have purple or red flesh.  According to the USDA, true sweet potatoes have white flesh, like a regular potato.   Two others that get tossed about are noodles and pasta…something that never occurred to me to be different.  Pasta is made from dough comprised of water and durum wheat and is somewhat elastic.  Noodles on the other hand have eggs, salt and flour, so you see there’s a difference there.   One last word on this…it’s been reported that Italian nutritionists and researchers found that a little pasta can actually serve as part of a healthy diet.   It’s one part of the Mediterranean diet.

The current rage which is Pokemon-Go can cause some pretty embarrassing moments.  A woman in Georgia was chasing down a character in the game and wound up in a cemetery…and while she was searching, the cemetery closed up and locked the grounds with her still in it!   She called 911 and eventually they got her out, but not before her rescuers had a good laugh and then told her she should stick in the real world.

Theresa May is the new Prime Minister in Britain.  She is the second woman to hold that post, the first having been Margaret Thatcher who was nicknamed the Iron Maiden by some.   Elected by some sort of electoral college, she’s already said that she was disappointed when Britain left the European Union, but that’s not going to be her ongoing mantra.   She’s been labelled as sensible and competent, which may be a big change from the Cameron-era.   The Brits have had their share of incompetents also.

We don’t hold an exclusive patent on stupidity.  Perhaps the biggest food was Neville Chamberlain who came back from Germany waving a piece of paper and proclaiming that Mr. Hitler said there will be no war.  On the other hand, there was Winnie.  Winston Churchill was as capable a wartime leader as one could ever want.

How’s this for non-lethal crowd control?   What’s the worst smell that you’ve ever experienced…or heard about?  Most people would say that it’s the spray from a skunk, and having experience it sort of second-hand, I would agree.  Many years ago, driving through North Carolina I ran over a skunk and the odor stayed with the car for the rest of the trip.  It was horrible…so, naturally, when I came across a story about “skunk water” it piqued my curiosity.   As reported the Jewish Press on September 15 of last year, , the controversial non-lethal weapon called “skunk” or “skunk water” has been described by Palestinian protesters as “worse than raw sewage” and “like a mixture of excrement, noxious gas and a decomposing donkey.”   Derived from an organic and non-toxic blend of baking powder, yeast, and other ingredients, “skunk” is dispersed as a form of yellow mist that is fired from water cannons.   One BBC reporter described the spray as the “worst, most foul thing you have ever smelled. An overpowering mix of rotting meat, old socks that haven’t been washed for weeks – topped off with the pungent waft of an open sewer… that you are not able to get rid of for at least three days, no matter how often you try to scrub yourself clean.”

As soon as the report came out American law enforcement agencies began to ask about it.   Even the BBC reported that several departments are already stockpiling the liquid.   The Maryland-based Mistral Security firm, which supplies “skunk” in the U.S. in canisters, grenades and large tanks that can spray up to 60 feet, recommends the liquid for use at “border crossings, correctional facilities, demonstrations and sit-ins.”   It is important to note that if officers are accidentally sprayed with “skunk,” they can neutralize the smell with a soap manufactured especially for them that the general public does not yet have access to.   Individuals sprayed with “skunk” have said utilizing a tomato-based Ketchup or soup has had some affect in rendering the smell fainter.

Well, there you go…that’s the stuff for this time around.  See you next time, eh?