The American People are Sheep being Led to Slaughter 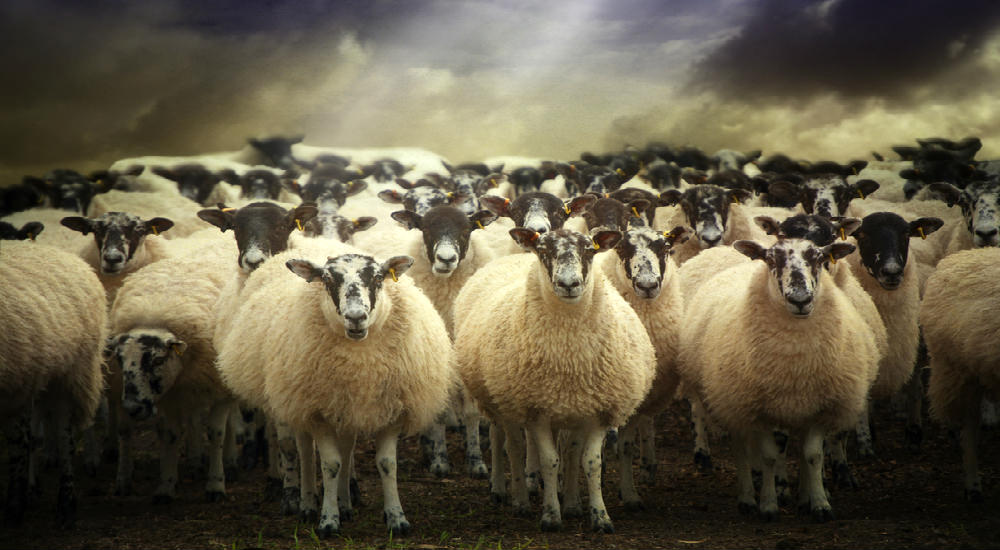 In cities across the country, police officers are murdered in cold blood by Leftist revolutionaries and other thugs. In shopping malls and other public venues, people are attacked by crazed jihadists using knives or machetes, screaming “Allah Akbar!”

In Baltimore and other cities where police are prosecuted and persecuted for doing their job, the thin blue line has retreated, leaving high-crime areas to the gangs. American citizens there are thus trapped, ending up like the poor under the boot of a backwater third-world dictatorship.

On campus after campus, colleges routinely refuse to allow different opinions to flourish. Think about that. The academy was created to foster debate and disagreement in an atmosphere of tolerance and respect for others. Today, it’s just another Mao-Mao act, with “cause heads” getting exercised by the cause du jour like the so-called rape culture or chanting that meat causes global warming, or something. Their number one aim is to destroy freedom of speech and freedom of thought.

What doesn’t seem to be occurring there is actual education, and what does pass for education leads people to graduate with degrees in Feminist Dance Studies who then leave the university to enter the scary real world where results are not only expected but demanded. Many of them become the most expensively trained hamburger flippers in all of America. Oh, and they now owe hundreds of thousands in student debt in order to learn how to be “relevant.”

I give most of the credit to the Communists of the former Soviet Union. They had a plan since 1920 that set into motion a long-term, two steps forward, one step back approach people like Vladimir Illych Lenin believed would, ultimately over many decades, destroy the capitalist hegemon. Lenin said, “All that is necessary for us to conquer a nation is to capture the minds of a single generation. The CPUSSR, the Communist Party USSR, trained cadre around the world, including thousands in the United States to act as agents of hope and change.

Put into effect over decades was a plan that included forty-five goals: Number 19, for example, was to foment student riots and public protests against anyone or anything the Comintern (Communist International) deemed anti-Soviet in nature. Reading the list will chill you and bring you face to face with just how close we are to succumbing to tyrannical rule.

Number 17 was the plan to take over the schools and use educrats to streamline socialist ideals, turning K-12 into transmission belts of Soviet propaganda. This was to be accomplished by thwarting local control and transferring decision making to a central authority (Education Department).

Number 21 set forth the plan to gain control of all media in America, to change news gathering into party propaganda pursuing the goals of the USSR while liberals and other useful idiots in major media organs abandoned objectivity for the greater good.

In 1972, the Soviets gained access to one of the two major parties in the U.S. The riots in Chicago, and four years later, the candidacy of George McGovern, provided the necessary catalyst to change the party’s nominating process. Over time, the Democrats became far less a centrist and anti-Communist, and far more Leftwing. There is no room for the Democrat Leadership Council or any other moderate voice. The Democrats today are the modern Bolshevik political party.

Yet, not the Democrats alone. No, no. The Republican Party has largely been co-opted by the idea of aglobal community working together to solve shared problems through open trade and the elimination of borders. Both parties push the nonsense that the UN is the last best hope of mankind.

So, Lenin was correct, after all. The Soviets did capture the minds of a single generation, the so-called Woodstock Nation who grew up from pot-smoking hippies to now be the leaders teaching the next generation.

The typical American has only a very limited idea why the Constitution was written, and they believe the clever revolutionaries that maintain “Separation of Church and State” is in the First Amendment. Our schools were created, especially the public schools, to turn out literate and thinking people who’d become informed citizens. Kids would learn about the separation of powers, among other aspects of the Constitution and they would know that document doesn’t stop people from acting, but it keeps the federal government from acting.

And so, today in 2016, we now stand on the precipice of a long thought out, long implanted systematic plan to overthrow the people of the United States. Take note: I did not say to overthrow government. Government has been for decades in the hands of a permanent, Soviet-style bureaucratzia, that imposes their collective will on Americans and pay absolutely no attention to the Constitution. Even when the U.S. Courts rule against them, these bureaucrats thumb their noses at the judiciary.

The EPA can just swoop in and take your land because that mushy part of your backyard is summarily declared a waterway, giving them veto power over any decisions you make regarding the property you sweated thirty years to own.

But, then again, private property is bourgeois and slated to be eliminated. I would venture to say today’s modern Democrat Party platform is perhaps close to being a mirror image of the defunct CPUSSR’s socialist ideals. They hate freedom, prosperity, and private property. They will if given the chance, raise an army to invade their own country and overthrow the people.

The only thing that stops the government from overthrowing the people is our right to bear arms for personal defense. The Soviet-Democrats will never stop attempting to confiscate our weapons unless we confiscate their right to rule first. They cannot be certain they would succeed, despite all the ammunition the government has bought up in the past decade, hollow point bullets especially.

Without that assurance they can survive a first-strike on the people, the government will continue to undermine our authority over them in other ways. Communists never surrender, they never stop until you are captured or liquidated. Or did you actually think they’re bringing in hundreds of thousands of jihadists – mostly men of military age – but telling us they’re refugees?

They’re importing a foreign occupation army. Count on it. They will disarm us one way or another. Their future depends on it.