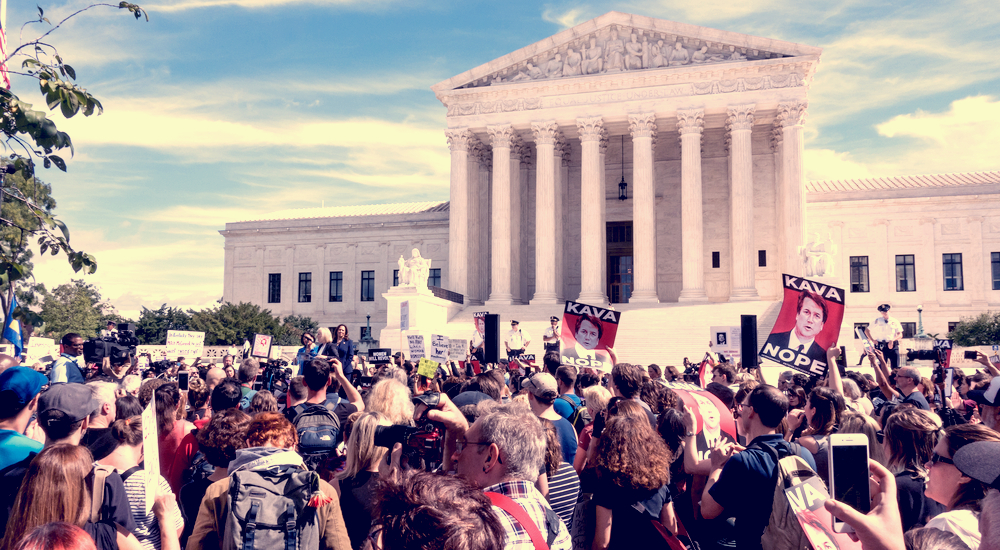 Make America Hate Again – Democrats used this as an epithet against Trump’s MAGA, but they have made it a reality in their own ranks.

Following the confirmation of an American son to the Supreme Court, Democrats in Congress openly declare war on Republicans endorsing assassinations and the heinous murders of their families.  Gangsterism, Islamism, Leftism, American Democratism, they are all the same thing – the violent subjugation of the innocent.  Leftist witch trials convict and condemn the blameless as guilty even if proven innocent, and then blames their victims for the violence they inflict on them.  Democrats say their followers are right to threaten and kill Republicans on the basis of their slanders that Republicans are the white supremacists, not the Democrat elites, their slaves, and their lemmings who are the ones engaging in violent bigotry.

Democrats says Trump Republicans are the violent racists raping women and destroying minorities.  Since when has been giving people job opportunities in a booming economy been violence against them?  This sickness of the liberal mind is being created and fed by leftist Democrats in government.  These people need to suffer the consequences of their sedition.  A Republican senator has already been shot and numerous police and innocent civilians murdered by leftist terrorism in the United States.  It has been imported by Obama and his minions and it is getting worse.  Just because they operate individually doesn’t mean they are not a national threat.

The United States needs new laws against slander and libel and the inciting of violence.  If a single member of a congressional GOP family is harmed because of this then every single Democrat in Congress needs to be arrested and charged for the crime.  Their leadership needs to be hanged; the Obamas and Clintons, Schumer, Reid, Pelosi, Booker, Waters, and every Democrat in Congress that has been calling for violence against Republicans and slandering them as racists needs to swing for their crimes.  And every one of their billionaires and millionaires that have been bankrolling their anti-America campaign needs to be seized and have all their assets stripped.

This has been the punishment of insurrectionists and traitors throughout history.  This is why America is once again engaged in a civil war initiated by Democrats.  This time it is not about dividing the country but overthrowing the Constitution.  Liberals believe they are justified because in their minds they are the ones fighting the Nazis not being the Nazis.  Does this have merit or is it just a delusion?  Could it be that Republicans are the ones being fooled into supporting evil?  That conservative Christians embrace racism, raping women, and violence against the innocent?  Are Democrat the righteous ones fighting evil?  Sen. Hirono (D-HI) and Rep. Waters (D-CA) are among those on video who have publicly endorsed and promoted Democrat violence against Republicans describing them as “motivated voters.”

How does anyone who believes themselves to be Christian endorse this?  I question my faith every day – not if I am supporting what is righteous, but whether or not I am worthy of being a Christian.  They answer is always no, but that is not why Christ sacrificed Himself for me.  I don’t live the life of a saint but that of a sinner and Jesus knew this.  But God knows there is a vast gulf between a sinner and a criminal.  There are those of us who do evil and regret it to seek redemption and those who embrace it.  Even if they are doing so on the basis of a lie they are doing it by lying to themselves that they are doing good by casting the innocent as evil.  It is how the Salem Witch Trial Inquisitors justified the murders of their victims and it’s how Democrats justify their crimes today.

Democrats have initiated violence to force slavery on the nation from the beginning.  They have always been the party of elites ruling over the rabble.  If America were run by Democrats today there would still be slavery, there would be nothing but state controlled media, and there would be prisons and cemeteries filled with their political enemies.  D’Souza’s movie, “America: What Would the World be like Without Her,” has a simple answer.  Socialism would rule, and the people would be slaves and then the leftist socialist factions of Communists, Nazis, Imperialists, Fascists, and Islamists would be warring for dominance.

The Jim Crow Laws and Dred Scott Decision were both endorsed by Supreme Courts controlled by leftists just as the Roe v. Wade decision was made by a leftist court to overrule United States abortion laws.  Is there any doubt that it is Democrats that have always been on the side of wrong and Republicans who have always been on the side of right?  The only people that think that the right is wrong today are delusional liberals wallowing in their galactic ignorance.

Democrats condemn Republicans for wanting the left to be prosecuted for their crimes calling it “persecution.”  Criminals always complain about how unjustly they are treated when they are brought to justice for persecuting the innocent.  Leftists always justify their crimes as being righteous when it has never been Republicans who called for the murders of Democrats en masse as the left is doing today, but only the actions of a few leftist wackos that infiltrated the Republican ranks.  That they slander the entire Republican Party for the evil of those few is just more proof of how bigotry is always enacted by the left.

President Trump was elected to stop Democrats from destroying this great country with their indoctrination in schools, crushing the economy, immigration violations, and electoral fraud.  He is making great trade deals, lowering Democrat’s confiscation taxes, restoring American energy that Obama closed, and booming the economy.  America is recovering from the debacle of democratic socialism and Democrats are engaging in terrorism to stop Trump from restoring American greatness and force their socialist tyranny on the nation.  They must be made to pay for their crimes!

[Author’s Note: Libtards, if you want respect then try listening and learning moral ethics instead of screaming in primal rage like a bunch of dumb monkeys.  The problem with Democrats is that they are uneducated and easily duped by malicious leftists smearing and slandering the righteous.  What Republicans do you see and hear actually saying the things Democrats claim they say?  There are no Republican Nazis, racists, or rapists besides the ones in your imaginations.]

Lock him up – Nazis vs. Christians; Democrats Make the Nation INSANE!