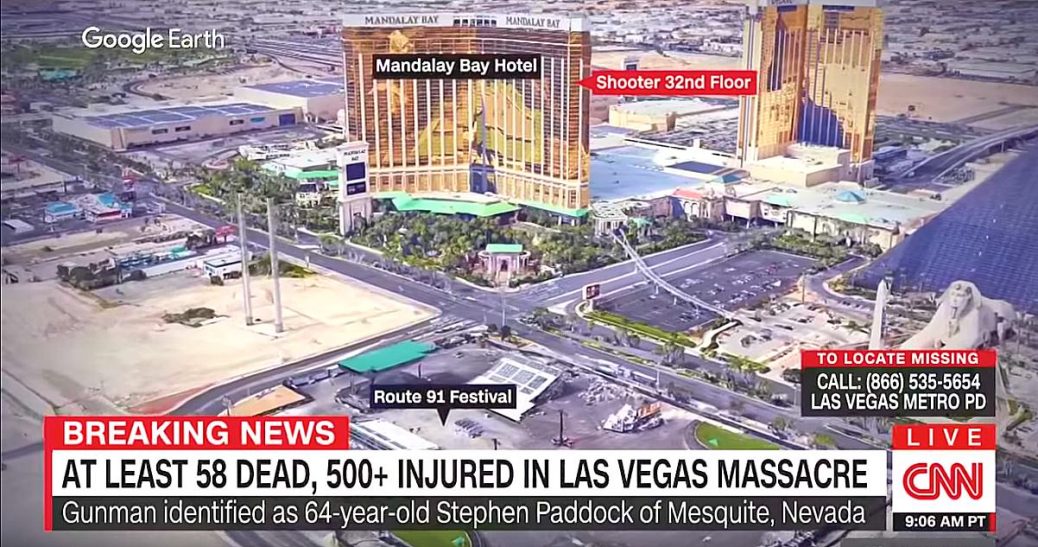 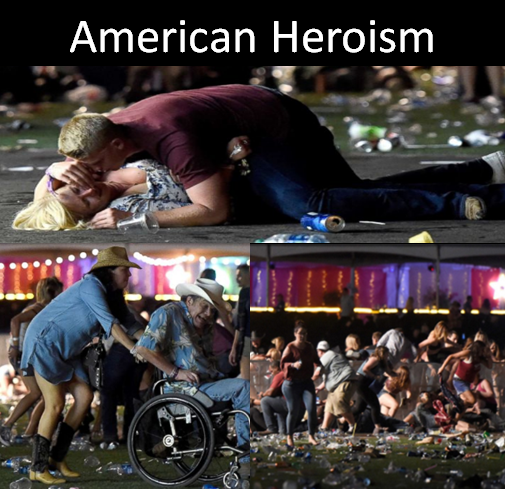 We woke yesterday morning to see horrific images of death and destruction. The most recent information was that almost 60 were murdered, and over 500 wounded by a man shooting an illegal automatic rifle from the 32nd floor of a Las Vegas hotel into a crowd of 30,000 watching a concert. Unfortunately, authorities expect the death toll to rise, since many of the wounded are in critical condition.

But there were inspiring images, as well. A man who died while lying on top of his wife to protect her from gunfire. A woman risking her own life to help a man in a wheelchair reach safety. People helping one another evacuate, and in some cases dragging wounded concert-goers out of the killing field. This was American heroism at its finest.

The one thing that bound the huge crowd together was a love of country music. I must confess that I am not a fan. But millions of Americans love it, and tens of thousands proved their devotion to the music and its stars by attending a three-day marathon concert.

Beyond that bond, there were all kinds of people in the massive crowd. People of all colors, religions and political persuasions. People that normally would have had nothing to do with each other. People who, if they had spoken, would have argued with one another over a variety of things, important and trivial.

But when the bullets started to fly, they were all just Americans. No one asked the people they helped what their religion or political party was. No one cared about the victim’s views on taxes, immigration or health care. Everyone just wanted to help their fellow human beings.

Of course, many people followed their survival instincts and simply ran to a place they considered safe. No one can blame them for that. But thousands stayed to help others, at great danger to themselves.

For some reason, country music has a huge following among military personnel, veterans, police, paramedics, and firefighters. So there was a high concentration of these people in the crowd. The majority were not on duty; they were just enjoying the concert. It was good that they were there, not only because they are trained for emergency situations, but because they have a strong sense of duty. Many of them did all they could to help others, and a number of them died or were wounded as they did so.

But there were also citizen heroes. They carried victims out on makeshift stretchers. They used their clothing to staunch blood flow and fashion tourniquets. Realizing there were not enough ambulances, hundreds drove victims to area hospitals. Some sat with dying people and comforted them. All who helped in these ways risked their lives, because no one knew when the shooting might begin again, or if there was more than one shooter.

And then there were the hundreds of people, both locals and tourists, who lined up outside the blood banks to donate their blood. No one told them to do so. They realized that with hundreds wounded, many gallons of blood would be needed. So they responded to the need. Many of the critically injured will live because of the extra blood. These people were heroes too.

We expect first responders to rush toward danger. Firefighters run into burning buildings, police rush into active shooter situations. And – although most people don’t consider this – ambulance and rescue squad EMT’s and paramedics risk their lives every time they turn on their lights and sirens. All of these professionals performed magnificently in this situation. Online videos show long lines of emergency vehicles rushing toward the scene while the shooting was still ongoing.

However, most of the people who helped their fellow Americans and saved countless lives did not have a duty to act. They were ordinary citizens, retired or off-duty first responders, and military people. Our first responders are heroes every day they are on duty. These people responded to a horrendous situation that would paralyze many with fear, and rose to become American heroes.

At first, police said they did not suspect terrorism, but had no idea of the motivation of the shooter – who later shot himself. Later, ISIS claimed it had radicalized Stephen Paddock over a period of months, and that they were responsible. ISIS often makes false claims in cases like this. They offered no proof that he was their man, but one fact lends some credence to ISIS’s claim. The main rifle Paddock used was a full-automatic weapon. This is very different from the so-called “assault weapons” that are widely available. Those can only fire one bullet per trigger pull. They are functionally the same as regular hunting rifles; the only real difference is that they are designed to look like full-automatic military weapons.

Full-auto weapons can fire as many bullets as their clips can hold. Some full-auto weapons can fire up to 100 rounds with a single trigger pull. The main thing about these weapons is that they are almost impossible to buy, even on the black market. It is very unlikely that a retired accountant who moved to Las Vegas to spend his life gambling could obtain one. But ISIS could get him one easily.

Whatever the cause or motivation of the shooting may turn out to be, it was the worst mass shooting incident the nation has ever suffered. Please pray for the families of the dead; for swift healing for the injured; and for peace for the many who were traumatized.

And ask the Lord to bless the heroes, both civilian and professional, who risked – and in many cases, sacrificed – their lives to be a blessing to strangers. John 15:13 says, “Greater love has no man than this, that he lay down his life for another.”