American Fascists: Liberals in Denial or Leftists in Deceit 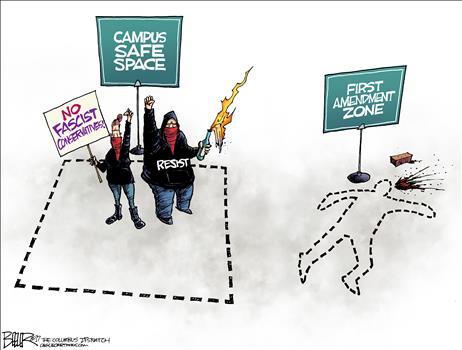 The First Right of every America is the right to speak their mind without fear.  Liberal fascists believe they have a right to silence anyone with whom they disagree.

Obama’s Army of black hoodies is assaulting conservatives on college campuses, rioting, and trying to burn out the Right by silencing their opposition through force.

Tucker asks, “Where is the ‘principled Left’ to defend free speech?”  The answer is – it never existed.  The fallacy is that anyone believes that today’s leftist Democrats are like the pre-LBJ Democrats who actually loved America.  But Democrats of the past wanted to make America their own.  They were no more for free speech than they were for freeing the slaves.  Today’s leftist regime is another animal composed entirely of America hating commie fascists intent on destroying the Land of the Free.  They stand in front of microphones and say they are fighting fascism, but the only people these fascists are fooling are themselves.

When it comes to the Right and Left they neither meet in the middle or on the edges.  The far right is not Nazi fascists and the far left is not Communists.  Nazis and Communists are both fascist totalitarians and both are leftists.  The Right has always stood for liberty.  The Republic is of the Right.  Only ignorant liberals are fooled into believing the leftist paradigm because they don’t know any better.  They think it makes sense that the “extremists” on either end are bad and the good people become bad.  What actually happens is that even good people can fall back on the bad ideas they learned at the beginning.  Liberalism is not something to which people aspire to.  We are all born liberals because we are all born ignorant, and we are all subject to a learning curve in which we learn from bad ideas what doesn’t work.  This is why most people become conservatives later in life.  Those who do not learned how to make immorality work for them.

That’s why liberals are confused when socialist dictators call themselves a republic such as the U.S.S.R. and People’s Republic of China do.  They confuse themselves further by believing that the Nationalist Socialist Party is not really socialist because they think Nazis and Communists are not the same.  Some even believe that Communism is not part of socialism.  The proof that socialism is born of totalitarianism and produces fascism, Nazism, Communism, and Islamism is in their dictatorial squelching of free speech, free thought, and free choice.  The idea that government can dictate proper thought through control of speech is not rightwing liberty, but leftwing tyranny.  The Net Neutrality of Obama and the Democrats is a prime example of how to fool an unwitting liberal into believing that government control of free speech is for their benefit.

Ajit Pai on the lie of Net Neutrality:

“Throughout the discussion that is to come, you will hear from the other side that Title II is the only way to preserve a free and open internet. Let me be clear. This is a lie. For decades before 2015, we had a free and open internet. Indeed, the free and open internet developed and flourished under light-touch regulation. We weren’t living in some digital dystopia before the partisan imposition of a massive plan hatched in Washington saved all of us from ourselves. The next argument you are going to hear is that Title II is necessary to protect free speech. That’s right. Some will argue that government control is the key to your ability to express yourself on the internet.”

The Right has always stood for what is right

Since the Middle Ages the Right and Left have not been two paths on the side of good, but opposites.  They may be two sides of the same coin, but that doesn’t mean they are a double-headed nickel.  The Right in Medieval heraldry was referred to as Dexter while the Left was referred to as Sinister.  There is not a righteous path to prosperity by both the Right and Left.  Capitalism and Communism do not lead to prosperity for the people by two different means.  Capitalism is smeared by the Left as benefiting “only the greedy rich” without regard to the fact that American capitalism created the first Middle Class in all of history.  Communism has always made all people poor while enriching the ruling elites in the same manner as all other previous forms of government.  That’s why America is the only nation in history that is the lone exception to this rule, which is the definition of American Exceptionalism.  Liberals think exceptionalism means Americans suffer from exceptionally arrogant national pride.  But pride has nothing to do with it.  Believing in the opposite of liberalism does.  It is not possible to tax people into prosperity.  Only the government is enriched in this manner.  Fascists love socialism and democracy because socialists and democracies always devolve into totalitarianism through the greed of the rabble that need strong rulership to keep them under control.

When people start fighting to suppress free speech by labelling it hate speech, or violent speech, or whatever, then use force to suppress that speech, they are engaging in fascist violence against free speech.  Leftists speak out against Christianity and in favor of Islam.  Islam is the ultimate form of socialism in which all the people do and think the same way in accordance with what they are told to think by their theocratic rulers.  They falsely point at the Catholic Inquisition that Christians crushed as the greatest evil in history because they know nothing of the Jihad.  Islam is guilty of a thousand times more murders than the corrupted church ever dreamed of committing.  Conservatives don’t want people not to teach anyone about Islam.  On the contrary, they want everyone to learn everything about Islam, not just the cream and cookies version taught by Malcolm X.  They want people to learn the Islam of Muhammad that’s being taught throughout the Middle East that has been their way throughout history.  They want people to learn about Jihad, not as the candy-coated conflict within one’s soul, but the Jihad of Muhammad to overthrow, kill, rape, steal, and destroy his enemies.  They want people to learn how Islam spread by the sword, not by word of mouth as Christianity did.

Free speech is necessary to maintain a free people.  Leftists will deceive those who are ignorant which is why they appeal to liberals.  When people believe that Muhammad was a good man, or that Islam is peace, or that socialist totalitarianism is beneficial, or who confuse government control with government protection as how to achieve freedom, then America’s fall will be guaranteed.  Learning the evils of the Left is the key to understanding the truth of the Right and you can only do that if you are allowed to speak and freely debate ideas to learn right from wrong.

Richard Dreyfus takes the side of free speech in America