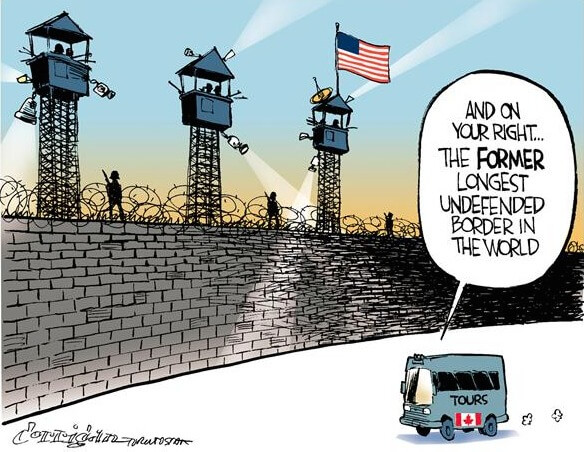 Illegal is illegal. Entering the US through the back door instead of the front door is breaking the law, no matter what the politicians try to label it. Our southern border is open, allowing criminals, terrorists, disease, drugs, etc. into our country unchecked. If you listen to most of the politicians, this is an insurmountable task, and the cost would be too high, or – the best excuse – it would be fringing on the undocumented aliens’ civil rights. Really? They’re not US Citizens. So, here is a simple solution that can seal the southern border in 90 days.

First, we create a one-mile wide by 1960-mile long military base, with one trade portal in each border state. We assign sections of this base to our military divisions. Each division has a sector they’re responsible for. No longer will Border Patrol agents be on their own. They’ll only deal with the trade portals and immigration. Why? Because this is a military base and deadly force is authorized. No more tunnels, as special units using ground surveillance would pick up the vibrations, and they would have to dig a mile and a half tunnel. The drug trade across the border will cease to exist.

How would we get the mile wide corridor? We take it from Mexico in repayment for all the money spent on their citizens.   And I dare Mexico to balk. They’re instrumental in sending us their worst citizens.

All illegals will be given 30 days to self-deport. They can go to any ICE office and will be helped back to their country of origin. Legislation needs to be passed at the same time to make it illegal to rent, hire, or help illegals, except to help them leave. If a person/business is caught, five years prison and forfeiture of all assets. If an illegal is caught after 30 days, they can never apply for US Citizenship.

English is the only language we do business in. There is no reason states should have to spend a hundred thousand dollars plus just to print the driver’s license test in fourteen languages. To get a green card, you should be able to read and write on a fourth grade level and speak English; to get citizenship, an eighth grade level. And no access to any government help for 10 years, no free loans, no free education, etc.

And no anchor babies. An amendment to the constitution needs to be passed that says until a child is 18 years old, he’s considered the same nationality as the parents. If you’re five or less, deport them with the parents, 6 or older, parents can stay, but are deported upon the child’s eighteenth birthday, never to be allowed to apply for US Citizenship. If they’ve been here 6 years and haven’t applied yet, it obviously was not a priority. A child that was deported, and applies for citizenship on his eighteenth birthday will be put in the front of the line.

And how are we going to pay for it? We are already paying the military, And we can cut the budget for the war on drugs, since it obviously hasn’t worked, the savings in the benefits that are being stolen, the money that will be saved from removing 11 million people off welfare to the jobs just vacated by all the illegals self-deporting.

It’s time we, as a nation, secure our border. A nation without borders is not a nation. We need to control immigration, drop this diversity dream, and realize that immigrants need to assimilate. We don’t need Ethiopians, Syrians, Russians, Hatians, etc, we need people who want to be Americans. If we stay on the path we’re on right now, we won’t recognize this nation in twenty years. It’s time to do what needs to be done to save this nation for future generations.