America: No Longer a Free Country? 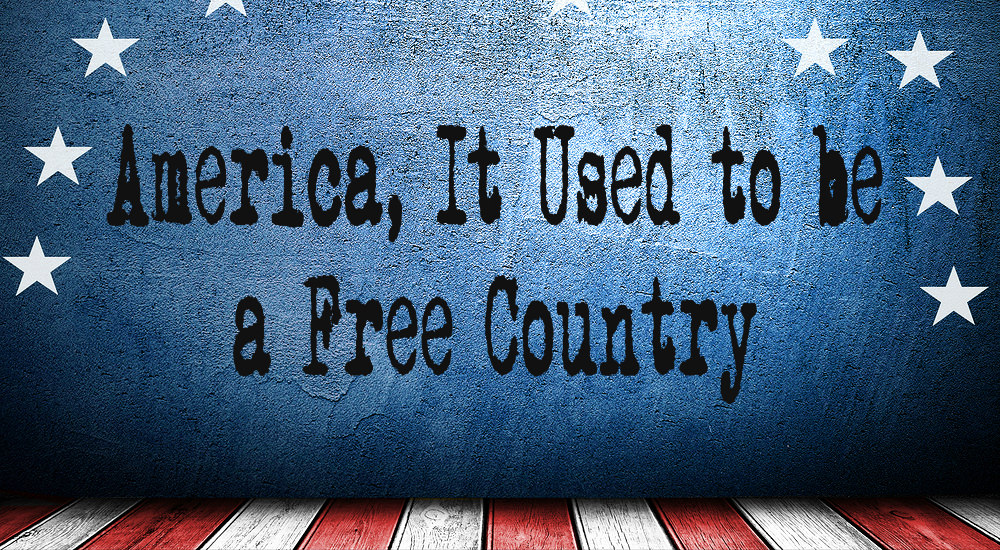 There used to be a popular saying, “It’s a free country” and it meant that individuals were free to decide for themselves what they wanted to do with their life, what they wanted to wear and eat and where they wanted to live.  It was a statement recognized world wide which brought those seeking independence and opportunity to our shores.  This immigration was not a desire to change America but to belong in a society that offered a chance for the individual to achieve a better life than where he came from. America offered promise via freedom to conduct one’s business or labor unfettered by the shackles of the State at least relative to their country of origin.  This is gradually changing as more and more the inhabitants of this nation have asked for and received less freedom in exchange for entitlements.  And those able to pass laws have heard the requests and responded with restrictions, increased taxes and earmarks to perpetuate their chosen career as redistribution of wealth agents.

Project the trend and you see the only possible scenario from this policy is the loss of freedom.  When a producer cannot produce without a government agent telling him how and when to operate, dictate costs and profits ( if any), impose bankrupting fines and totally restrict the acquisition of raw materials, soon business becomes so marginal that survival is no longer possible.  And here the state steps in to “provide” via their dictates and subsidies ( taken from what taxpayers have left ) a stand in line ration of what formerly was abundant and much lower priced.  We saw all this in the great socialist experiment of the now defunct Soviet Union and we are seeing the reemergence in the folly of modern day Venezuela et al.

People who swallow this clap trap of the wise leader who will control and distribute equitably have by their willingness to sacrifice their individuality for a perceived security, encouraged the rise of the tyrants that will obliterate their dignity and autonomy.  And with this loss will be the loss of ideas, the reluctance to act to implement progressive improvements and a deadening stagnation that evolves into the ancient tribal warfare of conquest and servitude.  This is what America is flirting with when she no longer challenges her politicians to limit their excesses, caters to the tyrants of the world in the name of diplomacy and watches her treasure disappear into the troughs of entitlement programs wallowing in fraud and corruption. The grab for power is all that we witness from a” try anything once” mayor of Los Angeles thinking a political solution to school performance is appropriate to a bumbling array of short term appeasement for high gas prices by a Congress that can’t restrain itself enough to live within its means.  One has to ask, “What are these power fanatics thinking?”.  The problem is not that they are oblivious of thought, although it may appear to be the most plausible.  It is the kind of ideas they hold as absolutes and will not question.  Even in the mass of evidence that shows how state run enterprises always fail , cost too much and lack any incentive for improvement, we see grubby little con artists spewing out how their reform will cure the illness that in actuality needs total removal .  We know that competition is the way to lower prices and get better goods and services but we sit idly by as politicians talk of the glory of nationalization of our health care, price controls on our energy producers, and censorship , yes censorship, of our free press.  It took a lot of courage for our founding fathers to buck the trend of monarchy but it evidently has been diluted from the gene pool.  Not that genetics has much to do with it. Courage comes from a dedication to knowing and doing what one considers right.  And if someone else expresses a strong feeling based on what he believes you must be knowledgeable and strong enough to stand up and challenge. Looking at polls and wimpy leaders won’t get you where you need to be.  This nation has a legacy of freedom the rest of the countries of the world cannot match and it is to us that they look for proof we know who we are, who they can be and these principles will be defended.  The Mullahs of Iran, the tin horn dictators in Latin America, that worn out socialist in Cuba and all those willing to test our mettle are waiting for the ax to fall.  They know it could be coming, but they’re betting it won’t. With the allies they have in America apologizing for America no wonder they grow more brazen.

One statement could turn this around in a minute.  Simply announce we are not fighting a ‘war on terrorism” as this is too poorly defined.  We are targeting nations threatening us whether by boycott, terror or whatever means. This points to a specific target and doesn’t allow the fringe group to avoid confrontation.  When Napoleon changed Egypt he didn’t wonder if some other country would disapprove.  He didn’t worry about what the world thought.  He knew serfdom was wrong and he eliminated it.  We know theocracies that are anti’-American but we try to negotiate with them.  We ignored the likes of Hugo Chavez as he expands his influence and cozies up to our enemies.  We tolerated a Communist nation 90 miles from our shores for decades and all our politicians can rant about and prosecute is the evil of American businessman providing our political parasites with the revenue they need to harass and regulate those who are providing the revenue.  And is it any wonder our freedom is fading?  Elliot Spitzer, the New York Attorney General running for governor said in  one of his campaign ads that he only asked whether something was right or wrong. The question he should have asked was , “ Is what I am considering wrong a popular misconception or am I simply doing what I think will be looked at favorably by a majority of would be constituents. “ Evidently Mr Spitzer never questioned whether the moral code he was using was right or wrong. The courage to question one’s assumptions is necessary to avoid flailing down a hill hell-bent on destruction.

Freedom comes from the lack of restrictions, not from the imposition of more and more restrictions whether it be on your ability to earn a living, speak or simply enjoy your life.  And this is what every individual has to have to realize his potential.  And those who would impose their restrictions on others  whether they be criminals or politicians will always need to be limited in what they can do or else their freedom to impose will smother other’s freedom to survive.  A perfectly policed welfare state will have no recipients or benefactors,only the thugs obeying blindly the whims of the panicked leadership unable to defend their weakened nation from the hordes of barbarians intent on the only thing they know…conquest. And someday in the future after the years of misery and want derived from seeking a welfare state, there may arise a wondering soul that stands before the mob and says, “There must be a better way.”  And from that beginning will return a society to replace the one that ignored the idea they could ever experience a loss of freedom.  Sinclair Lewis wrote a book about the U.S. turning into a dictatorship entitled , “ It Can’t Happen Here”.  As you review what you cannot do that you could do in the not too distant past, you realize that it is happening.