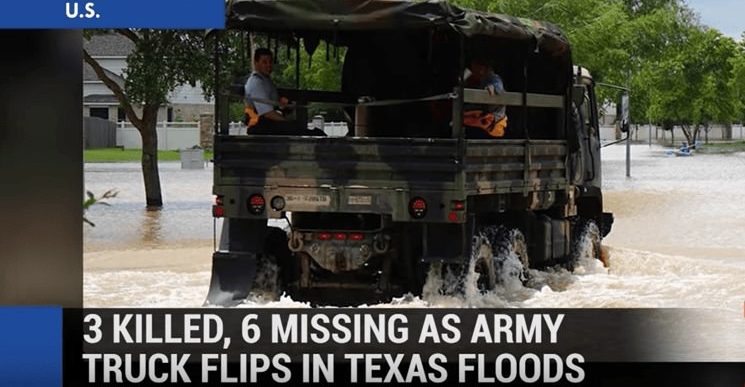 U.S. Army teams and other emergency rescue crews are in a desperate search Friday for four soldiers still missing from a truck that was swept from a low-water crossing and overturned in a swollen creek at Fort Hood, killing at least five and injuring three. This is just another incident at Fort Hood that gives Americans pause, and time to reflect on the true dedication, and willingness of our greatest heroes, our military personnel. These heroes give their lives in many ways, not just in foreign lands.

In April of 2014, we found ourselves watching news reports of a soldier being treated for mental health issues opened fire Wednesday with a semiautomatic weapon at Fort Hood, killing three people and wounding several others before taking his own life as a military policewoman confronted him, officials said.

The incident occurred Wednesday afternoon at Fort Hood, the site of a notorious 2009 mass shooting carried out by an Army psychiatrist who was an extremist Muslim. Fort Hood is getting a reputation of several uncommon, and non-planning of security measures, as well as, safety measures to keep our young service man and women safe as they serve our country on our soil.

Three soldiers were rescued and were hospitalized in stable condition. “This tragedy extends well beyond Fort Hood” Maj. Gen. John Uberti said Friday, adding that the Army is providing support and counseling to soldiers, families and friends affected by the incident.

Thursday was a very solemn day for the military It was the third tragic incident of the day for the U.S. military, after a Blue Angels fighter pilot was killed in a crash in Tennessee and the pilot of an Air Force jet participating in a Colorado graduation ceremony’s flyover was slightly injured after he ejected before the craft crashed in a field.

“Our thoughts and prayers go out to the soldiers their families and the Fort Hood community,” Texas Gov. Greg Abbott said in a statement late Thursday.

“The brave men and women stationed at Fort Hood put their life on the line every day, be it through rescue operations or on the battlefield. Texas will forever remain grateful for their sacrifices,” Abbott said.

With the commitment, and desire to protect America, while volunteering makes such a tragedy so much more despairing to Americans, families of Serviceman and women, and those affected by such tragedies. We need to let each of our faithful and committed service people with a special handshake, hug
or thank you in such times.

Parts of Texas have been inundated with rain in the last week, and more than half of the state is under flood watches or warnings, including the counties near Fort Hood. At least six people died in floods last week in Central and Southeast Texas.

Across parts of Texas, many were keeping an eye on a new batch of storms that could dump up to 10 inches of rain from Thursday through Saturday and worsen flooding caused by waterways that have already risen to record levels.

The heaviest rainfall Thursday night was reported in LaPorte, on the western shore of Galveston Bay, where 4.36 inches of rain was recorded between 5 p.m. and 8 p.m. Thursday.

As rain falls heavily in Texas, and flood waters rise, the military will be out more to protect families, and homes and businesses. They again will be at risk, and one can only imagine that their hearts and thoughts will be with their fallen comrades, and we need to do all we can, if we live in affected areas to show appreciation, and a desire to not put our Service people at more risk with our desire to accomplish things that just cannot happen during floods.

This Author would like to take a moment to say “I SALUTE YOU” to every military personnel, whether active or retired, for your service to America, and your desire to uphold the Constitution and Freedoms we have here only in America. “MAY GOD BLESS EACH OF YOU” as you place yourself between disaster and each and every American. Be safe, be vigilant, and come home every day to the family that loves you.