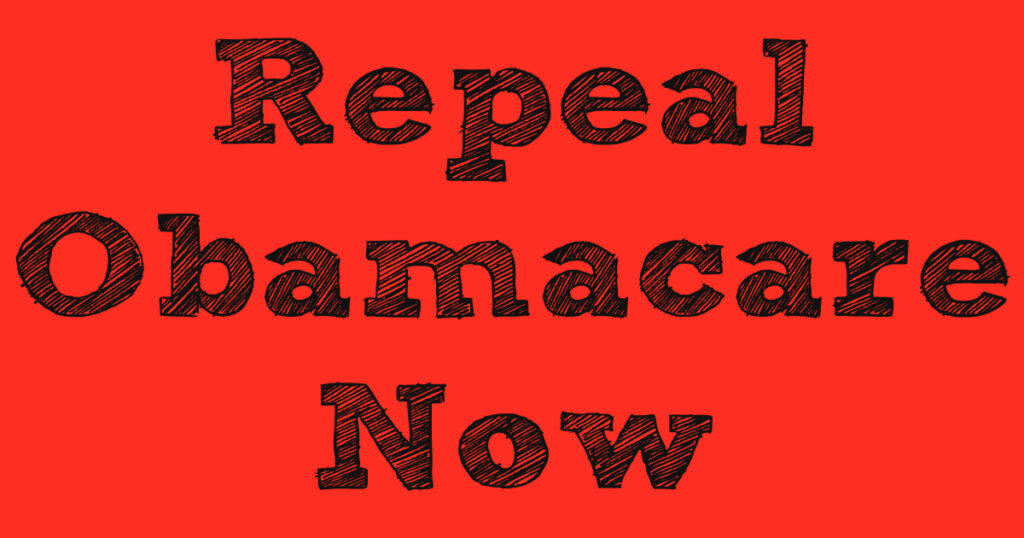 “Experience hath shown that, even under the best forms of government, those entrusted with power have, in time, and by slow operations, perverted it into tyranny.” — President Thomas Jefferson

Americans elected a Republican majority to Congress in 2016, in large part, to repeal Obamacare and find solutions that would make health care more affordable for all. We didn’t send Republicans to D.C. to give concessions to Democrats, who advocate for a single-payer communist system and didn’t care two-cents about Republican concerns in 2009. We didn’t vote for Obamacare-lite and more bailouts for insurance companies, or earmarks for special interests. We don’t want “repeal and replace”. Americans want to reduce the cost of health care for all Americans, and Americans demand a full repeal.
One might think that repealing the corrupt, failed Obamacare racket would be a fairly straightforward and necessary matter. However, on July 17th, many Republicans, such as Senate Majority Leader Mitch McConnell, proved themselves to be no better than con-men and liars, along the same lines of Democrats, who promised Americans an affordable health care system that allowed them to keep their doctors, when Republicans attempted to bring a bill to the floor, that left much of Obamacare intact and the Medicaid expansion in place through 2024. They also created a $50 billion market stability fund nearly identical to the Obamacare “risk corridors”, rightly described as “bailouts” by some conservative Republicans, such as Senators Mike Lee and Rand Paul.
Senator Lisa Murkowski (R-AK) demanded $1.32 billion from the Stability Fund for Alaska in exchange for her vote on the 17th. And, the South Dakota Purchase guarantees Indian Health services clients a 100 percent federal Medicaid match, which is currently only allowed through the Indian Health Service Department.

Shortly after Senator Mitch McConnell decided to pull this bill, Senator Rand Paul stated: “… the new bill is the same as the old bill except for it leaves in place more taxes, increases taxpayers subsidies to buy insurance, and adds $70 billion to the insurance bailout superfund. I don’t see anything in here remotely resembling repeal. And I’ve said for some time now that the bill has to look more like repeal to get my vote. I can’t support it at this point.”

One is left wondering, about the Republican’s political will to do the right thing and set America’s health care system back on a free choice, free market path, that will allow it to succeed. The House passed a Senate repeal bill by a vote of 219 to 212 in March 2010, which Obama didn’t sign; and yet, the Republicans chose not to defunded Obamacare, when they could have.
Senators Rob Portman (R-OH) and Shelly Capito (R-WV) both voted for a pure repeal bill in 2015, but now object to voting for a similar bill. Senator Susan Collins (R-ME) also stated that she wouldn’t vote to advance a pure repeal.
What health care legislation and reforms would these Senators support, if they had to live under it too, without their current exemptions?
On July 19th, President Trump called on the U.S. Senate to “repeal and replace” Obamacare once again, when he should have been giving a speech on the wonderful virtues of the free market. He missed a key opportunity to explain that communism fails every time.
America’s health care left the free market after the 1929 Baylor University experiment with some Dallas, TX school teachers and Blue Cross, and by the end of the 1930s, a health insurance model that swept away excellent cost effective health care arrangements was created by the American Medical Association, which called those arrangements “commercial” and “unethical”. This AMA creation evolved into a miserable mixture of government and private sector power for insurers, that drove costs sky-high, even before Obamacare, because federal tax policy and subsidies encouraged doctors to charge exorbitant rates and rewarded companies for providing employees with medical insurance.
Both the 1965 Medicare program and the 2010 ACA incorporate the misguided logic of extending the influence of health insurance companies over health care, supervising physicians and regulating medical care, all in the name of controlling costs. This is a socialist and crony-capitalist model that has failed Americans, and it must be eradicated, while immediately implementing structural changes that create a real world free market for both health insurance and health care.
A U.S. Department of Health and Human Services study released on May 23rd, 2017 revealed average annual premiums increased from $2784 in 2013 to $5712 on Healthcare.gov in 2017. This is a 105 percent increase.
Too many Americans mistakenly believe that they can take more money out of the system, while receiving top-of-the-line treatment and care, with minimal wait times and less money going into the system in the form of premiums, co-pays and deductibles. They seek a fantasy, rather than real solutions that provide the most good for all Americans.
When Senate Republicans sought negotiations with the Democrats this spring, Senators Tim Kaine of Virginia and Tom Casper of Delaware wanted funding [tax payer dollars] to offset larger than expected insurance claims for health insurance companies participating in the state and federal insurance exchanges. Senator Heidi Heitkamp (D-ND) wouldn’t even agree to a meeting, without an upfront Republican agreement to no per capita Medicaid block grants to the states and no rollback in Obamacare’s Medicaid expansion.
Senate Majority Whip John Cronyn (R-TX) told NBC (Tues-July 18th) that he was “not interested in bailouts for insurance companies alone without reforms”. He specifically dismissed any plan for guaranteed cost sharing reduction payments, which are considered to be insurers most important demand.
During the first GOP debate, candidate Donald Trump said, “What I’d like to see is a private system without the artificial lines around every state. … Get rid of the artificial lines [50 state insurance commissions] and you will have yourself great plans. And then we have to take care of the people that can’t take care of themselves … through a different system.”
Of course, the President and Congress should take a few more actions to lower costs and create a real health care free market. It must be made legal again for a person to buy any health insurance plan suited to one’s specific needs and choices, because people shouldn’t have to pay for items they don’t need, like abortions, addictions and sex change operations, in order to fund other people’s health care. Congress must end all federal government subsidies to health insurance companies, doctors and medical facilities, and also start tort reform. And a strong free market will emerge to provide and guarantee great health care at good prices.
Most importantly, anyone who really loves their family must fight with every last ounce of their intestinal fortitude to ensure our healthcare is maintained in a free environment, free from the arbitrary high-handed authoritarian decisions of some Washington bureaucrat. Cost becomes irrelevant, if a bureaucrat under a government operated system can deny a person treatment, like the U.K. did in little baby Charlie Gard’s life and death case. Let’s keep all health care services attainable for all Americans.
America is at a crossroads, and the Republican fight to repeal Obamacare is worth having, in order to halt any movement towards a catastrophic single payer system, by Democrats who are unwilling to accept any significant conservative reforms. Republicans have a brief window in time, to undo the damage to our health care system and stop Americans from being hurt further by the ACA, and great legislative leaders would not hesitate in the face of a hard task. Failure to fully repeal Obamacare is unacceptable and a crime against America.