Is America on the Brink of a Political Meltdown? 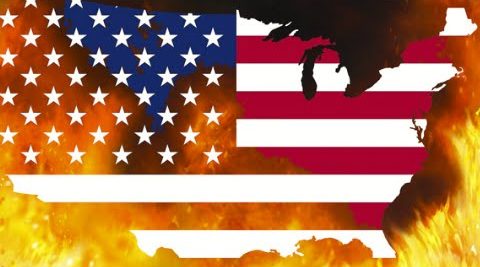 As we look toward the opening of the Democratic convention, we see email leaks “familiar for criminal liberals”, and Chairperson Debbie Wasserman Schultz banned from the proceedings. We see Bernie Sanders supporters ready to rumble in protest, and we watch, listen to, and hear Donald Trump spread his ignorance concerning the Democratic convention.

Now the GOP, now the Populist Party cannot spend time giggling and partying to the rhythm of the downfall of the Democrats when they used Gestapo techniques, lies and outdated, or unknown speakers for their convention. We can speak of Laura Ingraham who did the Nazi salute, or the use of a heartbroken Mom of her slain Benghazi son. We had to hear the criminal Hillary Clinton add her two cents of knowledge concerning the event, and the “fakeahontas” discuss how there will be no wall built between the U.S. and Mexico.

We see bikers coming to protect Trump, while BLM threatens more death and destruction. We see city AG’s lying and kissing-up to criminals who burn, destroy, and threaten people in Baltimore and hear of more and more deaths in Chicago. We see division amongst the minorities, and with the majority, and we watch as innocent people are gunned down by radical homegrown terrorists that have espoused on more than one occasion their love for the tyrannical murdering Islamic radical ISIS. We hear and see almost daily murders of the Police, those who have sworn to protect our loved ones in the sad times, and we hear people voting for criminals as the choices for the next POTUS.

We have the Democrats divided between the socialist, and the liberals, while the Republican Party has splintered into the populist “Trump supporters”, and the constitutionalist, “#nevertrump”. We see an independent party with 12% of the vote, and the green party and other small parties creeping up on the two main parties. We hear people going to stay home, and not vote for either candidate of the major parties, while others have switched to other parties. There is a mass exodus from the Republican Party, and a mass confusion of voters in the Democratic Party. No, my fellow Americans, the patriots who followed J.F.K, and Ronald Reagan are no longer the voice of their respective parties. We have curly and Moe running, and somehow someone believes that a clown car full of outdated, uncaring, non-vibrant politicians is not the establishment as they support Trump, and the fake wannabes of Native Americans, and NAACP leaders who lied about their black heritage who support Hillary. We see websites for guilt-ridden Whites trying to pay for the sins of 5 generations ago evils of men. We see the banning of Christianity in schools, but adherence to and teaching of Islam, and the LGBT agendas. We see politicians unable to speak about true transgender people have no problem using the restroom of their choice, but making laws to make it mandatory only brings out the proven record of perverts, molesters, and kidnappers, “none a part of the LGBT”.

And what do Americans do, they support two dividers that are also proven criminals to run as their nominated candidates? The parties are so desperate to win, they have sold their party’s souls for it. We see good men and women who were pushed aside to make way for the most corrupt, most questionable, and worst lying candidates. What is wrong with Americans? Have they lost their ability to reason, to vetted, to research, and to believe what their lying eyes and ears tell them?

Is politics just a popularity game where if you recognize the name, or your family believes in one party, or the news of your choice slants their coverage, you jump at that candidate and don’t let go, even when the vultures are nibbling at your eyeballs? Are there people out there that believe that the seas will rise, and part or the skies will clear and the songbirds sing if you vote for the most obnoxious candidates? Do they believe that a rose will open its petals to display the most beautiful and fragrant flower of all time and that poverty will magically disappear?

If you support the Convention of states, a great idea, and a wonderful opportunity for America to put politicians back to being for the citizens, but that would mean removing either President Trump or President Clinton. Are you ready to do what is right for the political arena? Do you realize that Hillary is by no means the unifier that Bill was, and Donald is the furthest from Ronald Reagan as a politician could ever be? Remember, the 11th commandment, do not speak ill of your parties competition.

America has lost control. We have peewee Herman and his sideshow of AG, and VP that does nothing but squawks the laughable rhetoric. Remember, limit the gun ownership, while the VP tells women to shoot invaders with a shotgun. We need to blame the Police for doing their job, and look for civil violations as Blue Lives are smothered in a blast of gunshots. We have Obama, confused not only about his religious support, but where he is from, and if he likes women, men, or whatever he goes for. All I will say is my daughters at the height of girl dome could throw a baseball better than Obama.

People call George W. Bush as an RINO while supporting Trump? George was beloved by the troops, the citizens of New York City, and had a 95% popularity at one point. When he left office, there was a 3 trillion deficit. Today, well we are going to hit 21 Trillion. Then we look at both the liberals and Donald’s plans, which both would substantially increase the deficit, with Trumps doubling the deficit in 8 years.

Time for CIVICS and responsibility to the country are once again taught in school. Once again the technical classes, and on the job training for mechanics, woodworking, and other labor jobs needs to be brought back to schools. Common core needs to go where the core of every common apple ends up at, the trash. We need to cut the cord from Donald and his #trumpleweeds, and the #clintonites that support Hillary, and bring someone of consequence with at least an inkling of true grit and intellect to run this country. These two are destroying America and the politics of the government for their own gain.