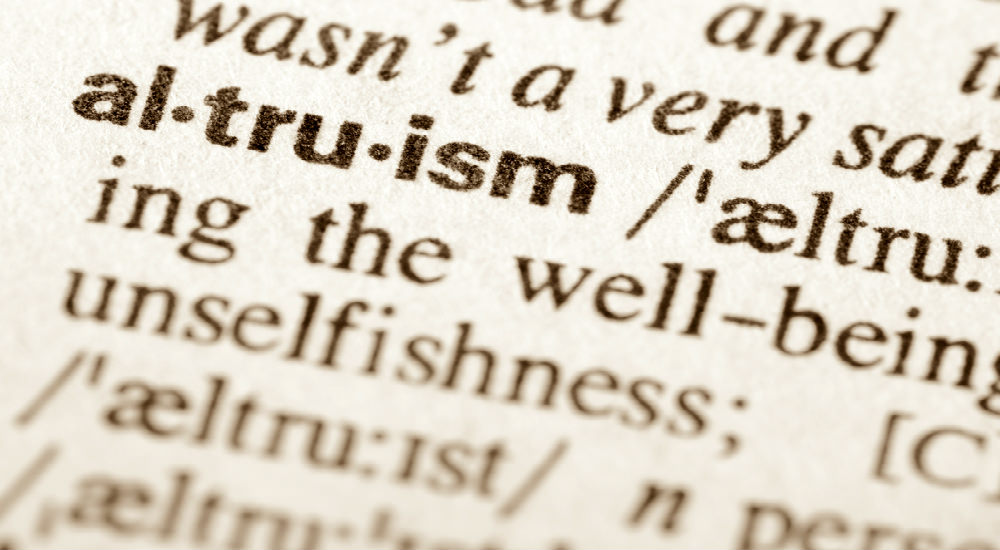 The common trait of an altruist that can be readily identified is a propensity to lose.  The reason for this is in the nature of the moral code they adhere to.  Since living for others is their primary interest having a vested interest in winning doesn’t focus their purpose to them but to the “others” i.e. the competitors.  They cannot feel good about winning because the empathy they feel for others detracts from the satisfaction of a performance that leaves the others left out.

Since there is no such thing as a pure altruist, this aspect is magnified as the scale of altruistic belief increases. The closer a person can be to a pure altruist the more likely they will be satisfied with losing.  Since the cardinal virtue of altruism is sacrifice, winning must necessarily take on a role that involves personal sacrifice i.e losing.  Only the champions who feel no remorse for beating the competition can truly become champions.  A person who feels apologetic ( or guilty ) for outperforming another will succumb to “feeling better” to accommodate his altruistic premises.  Thus it will feel better to not win all the time and allow someone else to also win.  You can see this in the school system that seeks egalitarian student behavior.

However, there is one area that winning takes precedence and that area is politics.  Why do altruistic politicians try to win at any price?  The reason is the notion the world must be saved and only a powerful politician who can mold human behavior with laws is capable of this task.  If they cannot win the power cannot be obtained and the “good” they can do will go unfulfilled.  They still talk of such nonsense as income equality, but they want more in their pocket and they want taxpayers to foot the bill for their follies. When confronted with this apparent contradiction they revert to the need for sacrifice.  In this case it is a sacrifice of their integrity.

An altruist is always moving toward a concern for others, meaning someone other than themselves. How you ask could someone becoming a corrupt politician and getting personal enrichment from shady deals and bribery rationalize they were a public servant and working for the people?  The sacrifice of integrity mentioned in the previous paragraph addresses this quite nicely.

The degree that an altruist practices altruism is the degree to which they lose.  A part- time altruist has enough self concern that they mostly mouth how they are for the “people” but in reality they practice a more rational selfish morality looking out for themselves and their loved ones.  They don’t pretend to be Mother Teresa and only sacrifice their time out of shame and or guilt.  The shame and guilt are the price they pay for accepting that which to them is sacrificial. A Sunday sitting in a pew listening to mythological nonsense when a day on the lake is what would be more enjoyable is an example of sacrifice of a day of one’s life and pleasure.

There is no escaping the need for winning as is exemplified in political races.  Either you win or you lose there is no other alternative.  An altruist running for office doesn’t want to lose but his empathy of his opponent  ( one of the undefined others ) stops at the ballet box.  Yet once on office this  greed for power becomes opulence and prevaricating chants of ,” I’m here for you”.  Don’t kid yourself, nobody runs for office to become a “public “ servant.  It is power and prestige that triumphs over the need to help others.  Only because altruism is so ingrained from childhood does it continue to produce losers.

The alternative to altruism is rational egoism.  When you step into a businessperson’s business you expect to trade for what he offers and you have to exchange.  When you step into a politician’s office you expect to either be ignored or get some recognition by contributions or bribery.  Altruism requires corruption as it is incompatible with human nature.  Being repeated daily and without analysis it continues its path of self destruction helped by those who are willing to try to accept that which they know doesn’t work and requires sacrifice of their values and life. Look at the state of the world and how much altruism is a part of this and you will realize what the real enemy is.  An idea that has been propagated and is essentially false.  An immorality under the disguise of a morality.  False , impractical and deadly.  The creed of altruism.