Every year trillions of Dollars change hands for goods and services. People buy from everything, pay bills, mortgages and taxes. How much money is involved, how does money work, how is it defined and quantified?

There is only $1.5 trillion of US currency in the world and most is not in the United States.  It is thought up to 75% of our Dollars are in off-shore bank accounts, held by foreign governments in secret number accounts, but lent to international commerce for high short-term interest.  The Dollar is the currency of planet Earth, but it is dangerously close to losing that title.

And, it is thought a substantial amount of cash is out-of-circulation in safe deposit boxes, buried in Mason jars and stuffing mattresses!  It is “dead money,” but this is the least documented and a class we doubt.   Some economists think no more than $375 billion is in circulation.  We think the equities markets prove otherwise. 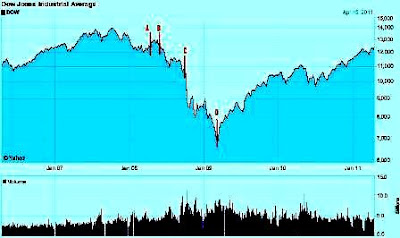 During the 2008 Presidential election campaign the Dow Jones 30 Industrial Average, DJIA, bumped up (A) when Republican John McCain was nominated and turned down (B) when Democrat Barack Obama was selected.  In the early fall it leveled off as the campaign continued, but by October when it was clear Mr. Obama was leading the DOW 30 went into a nose dive from which it did not recover until after the inauguration new Treasury Secretary Ben Bernanke started printing money with no basis under the grand title “Quantitative Easing.”  We fully document this at:

The amount of money in circulation in America is determined by the sale of $100,000 Treasury Bonds since 1971 when Richard Nixon took us off the gold standard.  We think this is a more sensible standard as it directly reflects, or depends on, the strength of the economy and curbs inflation or deflation.

In good years more currency is needed, in bad years less to keep the relative value of the currency as “wear and tear” reduce the number of bills in circulation at a convenient rate.  Dr. Bernanke, Ph.D. economist, broke the rule by printing money without offering bonds knowing there was no market for them, a fact that would crash equities markets if documented.  Ben played God to the economy, the nation suffered and is yet.  What to do?

A free market produces what it needs.  It makes rich people who make two critical things happen:  They inspire people to dream of getting rich with an invention or improvement and they generate capital as rich people have more than they can spend so they are able to support new ideas, which they are qualified to consider having been successful.  Rich people are an  economic asset socialist countries do not have as they tax them out of existence seeking to make everyone equal; equally miserable.

Only one of every 1,300 US Patents make more than their fees. Were 1,299 bad ideas?  No, there was not enough capital to bring them to market.  Rich people have a common characteristic:  They love new ideas and have the money to support them for “a piece of the business” which expands wealth.

Federal Reserve Director Bernanke set the bureau on a dangerous course with “Quantitative Easing,” printing money without selling T-Bonds; no basis.  We are confident Director Mnuchin will reverse course and put our currency back on the “validated” track, by printing new money only when the sale of an equal amount of T-bonds confirms something of that value is in the economy.

Product basing is a far better than gold which has very little real value. Gold is a useless metal with little physical strength. It has a unique color, is stainless and corrosion free, but iron is far more useful.

The most valid reference in any economy has been grain.  In grain farming areas farmers store dried grain in sealed silos, take trade documentation at the bank for banknotes on that value.  The banker sells the grain at a time advantageous to him.  This mechanism is adaptable to a modern economy and as perfect as any system can be where currency directly reflects the economy.

With so much of our currency in world commerce we have to be sure we do not lose it to the world which then restricts expansion in our nation.  Dollar deposits in foreign banks are generally not functioning for us.  Too many billions of Dollars are hidden by corrupt politicians taking bribes for trade concessions and other illegal acts.  To recover those we should offer a million Dollar bounty for information leading to the conviction of any public official with ill-gotten money in foreign accounts.

As well we should have the lowest corporate tax rates on the planet as that would quench offshore banking by our corporations and encourage foreign entrepreneurs to incorporate and bank in the United States generating more capital for development by our people.  This is the strategy China will soon put in place as they mean to be the greatest economy on the planet and this strategy is all too obvious.