African-Americans Blaming Whites for their Own Murder Rates

With the Left you are always damned if you do and damned if you don’t.  Democrats declared the police to be racists KKK murdering innocent young black men.  They demanded that police be pulled out of their neighborhoods and let the good black peoples protect the streets.  Now the gangs rule by tribal laws and their streets are running with blood and they blame white people.  After three years of Democrats cheering for police being ambushed and assassinated, now they are blaming police for doing what they wanted. 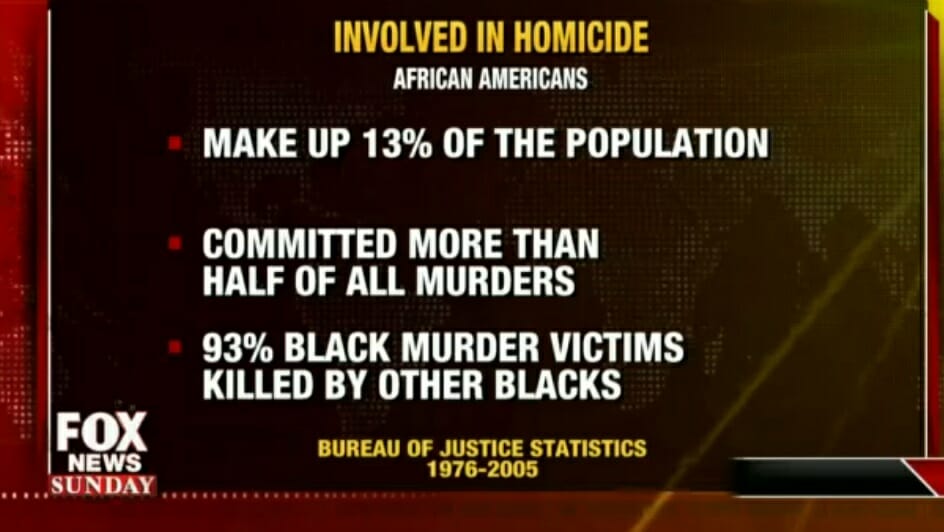 Some blacks in America believe that police are oppressors and glorify the gangster life fighting against the law.  In what sane mind would anyone ever believe that gangsters would be better at keeping the streets safer than police?  Even if the police were racists they would be better than having gangsters who rule by the law of the jungle.  Leftists who want to live by that law say “that’s racist.”  What is racist is believing that to be racist.  What is insane are people who want to live by their own laws rather than by the laws of everyone else and then blame everyone else when they are killing each by the laws they choose to live by!  This is the pathological insanity of leftists.  They always blame others for the evils they bring on themselves because they lack the moral compass to understand how to live their lives righteously.  Obama speciously claimed he wanted police to establish better relationships with black neighborhoods and use less deadly force.  It is the equivalent of Obama’s Rules of Engagement for the military to “protect the innocent” when battling jihadi terrorists.  The result is more American military deaths and fewer jihadis killed.  When the goal of Democrats is to protect criminals from police then the people need to open their eyes to whose side they are on!  Such actions lead inevitably to police being the victims rather than the protectors as Black Lives Matter called for black criminals to rise up and assassinate police.

Policeman with Taser shot by suspect

The fallacy of liberal logic is exposed by the Trump Doctrine that annihilated ISIS in less than a year while Obama had the military fighting and dying against them for four years.  Democrats want police-free zones filled with criminals and foreigners under their umbrella of Sanctuary Cities and States where they don’t have to live by the laws of the Constitution.  They want to rule their own country with their elites in charge and the masses living like animals praying for scraps from their master’s table.  If Democrats could retake the Congress and kick Trump out of the White House they would reverse his tax reform so that they could once again suck up the wealth of the nation as socialists always do.  And as the people live in misery feeding off of each other until they rise up in protest they sit back and laugh.  When the protests become threatening then they turn out their police to slaughter the upstarts.  This is the difference between rule by the rightwing and the leftwing of political ideology.  The far right is not Nazis and the far left Communists.  The Right is for liberty and the Left is for authority, democracy vs. totalitarians, freedom vs. slavery, i.e. Republicans vs. Democrats.  Republicans have always fought for freedom limiting government to protect the people from oppression, while Democrats have always fought for slavery by government ruling over the people.  That has been the way of things from the beginning of America.  How Democrats have been able to warp the thinking of people to believe that Republicans are the Democrats and Democrats stand for liberty, for helping the little guy, for anything good for the people is the result of the leftist media propagandists corrupting young minds with dysfunctional thinking.  By feeding them false history, false facts, and warped logic, the media of the Democrats has corrupted this nation to their extremist ideology that criminals are good people being force to behave badly by government.  Government in America was designed by good people to protect citizens from criminals and corrupt politicians.  But Democrats have refined their corruption to the point that they can put up a façade that conceals their true nature.  Until America is educated in righteousness, rather than indoctrinated into leftist ideology, there is little hope for improvement.  Democrats took God out of the public forum and condemned the Christian church in favor of atheism and Islamism, both of which are anti-God, to promote their totalitarian ideology of their elites ruling the masses.  These forces must not only be pushed back, but ejected from the country.  Christianity allows people to live their religious beliefs freely, but not when they seek to overthrow freedom and impose their ideology on others.  So long as people want to live separately as hyphenated Americans rather than in unity with all other Americans this division and decline under Democrats will continue.  The Democrat lies that tax cuts kill people, police are racists, and Republicans are the party of the KKK only sells with the most ignorant of people.