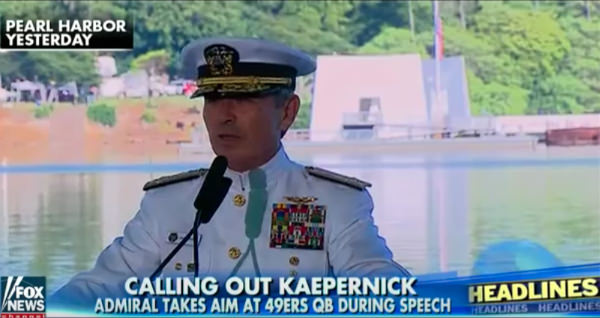 This year to commemorate the 75th Anniversary of the attack on Pearl Harbor, U.S. Pacific Command Commander Admiral Harry B. Harris delivered a rousing speech honoring our veterans and delivering a harsh blow at the liberal hero du jour Colin Kaepernick.

Kaepernick is the Quarterback who made headlines earlier this year when he refused to stand for the National Anthem.

Admiral Harris pointedly mocked Kaepernick for his ignorant position while simultaneously praising the brave men and women who have stood to fight defending Kaepernick’s freedom to kneel in disrespect.

“You can bet that the men and women that we honor today – and those who died that fateful morning 75 years ago – never took a knee and never failed to stand when they heard our national anthem being played,” Admiral Harris said.

You can see the full ceremony below: