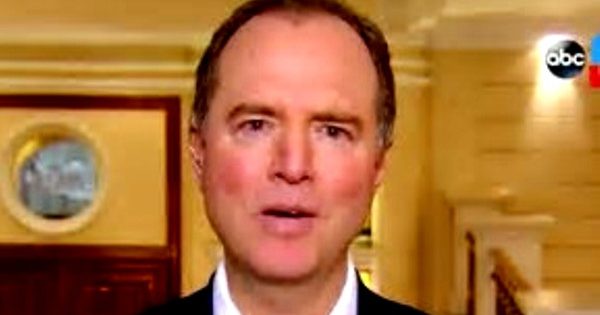 Democrat Adam Schiff is man with a baked-in unctuous expression. Several writers have analyzed this man and produced a range of excellent analyses:

Jeff Dunetz of “The Lid” wrote: “At today’s House Intelligence Committee hearing, Ranking Member Adam Schiff (D-CA), went on a ten minute monologue pulling together disperse fact along with some he made up (like weakening policies distasteful to Russians at the RNC in the GOP platform-they were strengthened) to present his own uninterrupted partisan bloviating… slandering President Trump instead of doing what he was there for…asking questions of others. Instead of looking for facts and following them where ever they led, Adam Schiff decided to create his own narrative and substitute it for reality.”

Then Dunetz follows explaining that Schiff “sold out” long ago when in July 2015, he sold out “to become the house Jew” for Obama and the liberal Democrats. He was the first Jewish key Member of Congress to support the Iran deal that is almost as dangerous to us as to Israel. This brought Schiff much attention from the media and he really loves it. As a result it is said that Schiff no longer has a conscience and is a puppet without loyalty to America, or Judaism. Many conclude Schiff’s conversion is total and he now a party hack; a virtual zombie Democrat.

Representative Schiff does strange things. He has a serious recall problem not remembering what he has done or said from one minute to the next. He seems to be riding some kind of mental bicycle making constant corrections. During the House Select Committee on Benghazi hearing of Hillary Clinton, Schiff made every one of his turns political. Instead of asking Mrs. Clinton questions about the subject matter, he spent all his minutes lambasting Republicans on the committee for being political, seemingly not realizing it was only he that was being political! It was then apparent he was going through some kind of personality metamorphosis, i.e. “the worm had turned, or was turning, or was spinning!” Adam Schiff was finding his voice!

The result, according to observers, is that Adam Schiff was paraded around by President Obama as the “house Jew,” so he could say, grinning, “There are Congressional Jews that like the deal,” It was as if Adam Schiff was the only person in the world who didn’t realize he was giving President Obama a trophy at his expense and real power to those promoting an incredibly bad and lethal deal for Israel.

At some point Schiff must have seen how Obama and Kerry capitulated on every issue in the Iranian negotiations giving them an easy path to nuclear weapons. They got $150 billion dollars they could use to fund terrorism, relief from many sanctions which would give them even more money!

Didn’t Adam Schiff notice President Putin made President Obama a fool, out-manipulating him in every step of the negotiation? Even our fawning press made note of it. But don’t blame Obama. After all why should he push back against Putin after Adam Schiff gave him permission to partner with Iran even if, as Schiff said himself, “They’re definitely part of the problem.”

The Adam Schiff story is one that will likely make a gripping personal disaster movie as it cannot end happily. You cannot sell out your principles, religion and soul without landing in a trash heap somewhere unless we are much farther down the road to national perdition, a personal Hell of our own making than is apparent. Adam Schiff is ahead of us. In that respect he is Adam Schiff, Leader.