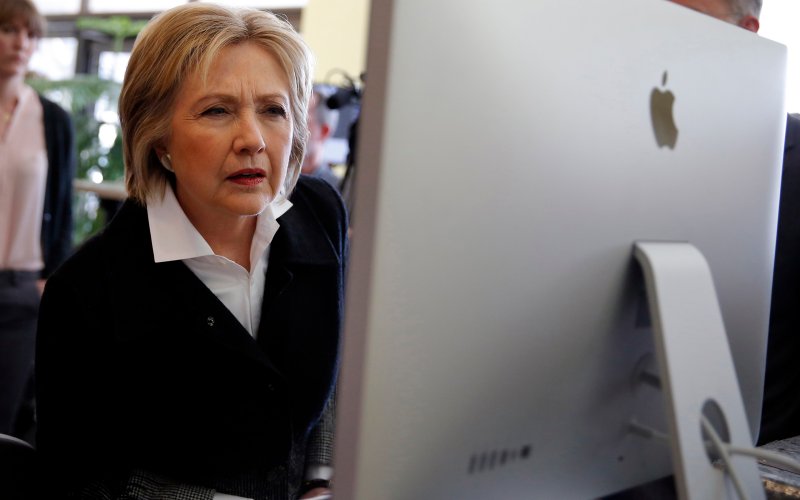 A mass conspiracy is erupting from the Basket of Deplorables--at least Hillary thinks so. When Presidential Candidate Donald Trump questioned a problem with voter fraud and suggesting that elections are ‘rigged’  the Hildebeast went into overdrive using his valid suspicion as an example of ‘the great right wing conspiracy. Of course anything that bucks her is assigned that category.

First of all, the elections ARE rigged. That has been proven over and over. This is why the Dem-wits insist that photo IDs must NOT be required to vote,  “Since,” they regurgitate,”it is ‘racist’ to demand photo IDs to vote. How’s that again?  The photo ID confirms the person voting is who he or she says they are and blocks multiple voting which has, again, been PROVED to take place.

See my previous story which proves voter fraud was absolutely employed in the deceitful “election” of Obama and is happening again in this current one. Here is the link to that story with the proof needed to confirm that Trump is right in his declaration of rigged voting.

Read this and take action to stop this malfeasance in its tracks.

NOW THE ACCUSATIONS against Trump, which comes to you through the courtesy of the ‘mainstream’ Communist media whose job it is to manipulate you, their reader and hearers, to coach you to do what they want you to do for the Communist cause by influencing your thinking by hiring--yes– HIRING these so-called character witnesses to make accusations in order to file bogus charges against our presidential candidate, which will discourage voters.

She now claims Trump forced himself on her…yea…forcing himself sexually on a woman who makes her living having sex with countless men and women she meets for the first time while filming various kinky sexual acts on camera to be shown in theaters in order to titillate the world (pun not intended). She is paid for her services.

And of course, her lawyer, Gloria Allred, the celebrity chasing litigator, is ready to cash in on any and all claims that can be concocted, legit or otherwise, that generates serious money and publicity for Allred, who seems concerned that her 15 minutes of fame might fade.

Trump has denied all these allegations. If there were credible indiscretions, even though slight, in the hands of Trumps’s enemies they become gigantic rape cases. Any “facts” are  totally exaggerated and filled with helium by the left wing  “mainstream” Communist press.

Donald Trump is handsome, rich, well connected with virtually everyone in the world, and would not have to force himself on anybody. Plus he  has an extremely beautiful wife. No one could be more desirable. And he knows full well that she is a treasure. And he would put that at risk for trashy sex with trashy women who could be carrying any number of sexually transmitted  diseases? I don’t think so. His latest accuser’s life is nothing but lies.Think about it.

Now, the BIG lie: that Trump is losing the election. Trump may be a bit too honest for many, he can sometimes be firm, boisterous and a bit obnoxious, but columnist Jen Shroder describes him as The John Wayne of politics. She also very correctly describes him as “a diamond in the rough.” We’ll buy that.

What we will not buy is the fraudulent media reports that Trump is losing in the polls. Has lying now become a contagious malady? Seems so. Everyone at this point seems infected.

First of all, the Communist Party USA (CPUSA), wants to convince us all that Trump is not winning to discourage us from even taking the time to vote. VOTERS, DO NOT FALL FOR THIS!  Remember, a no-vote is a vote for Hillary, and a 3rd party ‘protest’ vote is a vote for Hillary. For God’s sake, people, wake up! Hillary cannot even get enough people to show up at her rallies, indeed, it has been verified that she has been paying people just to come. Trumps’ rallies are always PACKED with overflowing crowds.

And take a look at the stats below which blows up the lie that Hillary is winning at the polls. Read these FACTS:

Most of Hillary’s followers are fake. According to the Washington Examiner, 41 percent of Clinton’s are not real people. Dead people apparently left their graves to turn out in droves to the polls, according to voting records. It is for sure that they did not show photo IDs.

In contrast, The Daily Caller says that Trump followers are 90% real with 90% of them having a previous voting record.

And to hammer this home, Trump gets 5000 more eyeballs focused on the screen than Clinton. She really is that boring to the people.

Fact # 4: Instagram. Trump has 6.2 million followers, Hillary has 800,000 followers. Instagram is a platform with mostly all pictures and not much substance, exactly what Hillary supporters can comprehend. Regardless, she still does poorly in this medium.

These are FACTS people. Trump has more subscribers than Clinton on every major social media outlet, but what is even more telling is that there are nearly, now get this, nearly three times as many people subscribed to Hillary for Prison than there are subscribed to the Clinton page.

The DNC leaked emails from WikiLeaks have proven that Clinton PAYS PEOPLE to support her online. Trump supporters, on the other hand, willingly actually DO like and follow him on social media.

Trump actually has the support of the people. He is going to win this election come November, no matter what the ‘mainstream’ media would like you to believe. And they will go to extremes to discourage you from voting.

Right now, every single patriot needs to share this article and the previous ones with friends, relatives, and on social media. We need to fight these rigged polls that seem to come out every day. Hillary and her Communist handlers, has a big bag of tricks and is trying to trick the American public into voting for her, or a third party, which is a vote for her, or worse, not voting at all which also is another vote for Hillary Rotten Clinton. Let us show America the TRUTH. Do not let the system con you.

Here is what we get with Trump: A housecleaning in D.C., kicking out the status-quo, stopping the cruel inhumane murder of babies, 20 million to be exact, proper care for veterans, stopping all illegal entry into this country and thoroughly (I mean THOROUGHLY) vetting those who do come in; raising the standard of living, not by more welfare, but by giving more opportunities, ending Christian persecution, stopping the LGBT invasion, the required studies of homosexuality and transgenderism in public schools beginning with kindergarten. And he will require ACCURATE teaching of the history of the U.S.

He will restore decency and order in society, safeguard Social Security, job security, and take a hard stand against any and all Islamic Terrorists who try to further harm our country. Plus he will re-establish the military as the greatest force in the world, not a social experiment. He will get rid of Obamacare, a real obamanation for all who have lost healthcare as a result.

On the other hand, with Hillary, you will get even more cruel dismembering abortions of innocent little babies who feel pain as they are literally dismembered, limb by limb in the womb while they are fully conscious, feeling every sharp jab as limbs are cut and torn off them as they silently scream.

Remember that the Hildebeast is ENDORSED by Planned Parenthood, to which she gives full financial support. Yes, she fully supports that murderous organization that even sells,”fresh” baby parts following each execution. She and Planned Parenthood daily demonstrate their actual HATRED for little innocent babies who they think gets in the way of people’s lives.

Plus, she will open up our borders to all comers. She has stated her goal of bringing in millions of Muslim (“refugees” from Syria) who have vowed to bring Jihad to America, and she will push for even more at taxpayer’s expense for the LGBTQ community.

Here is Hillary’s Official Statement: “Laws have to be backed up with resources and political will. Deep seated cultural codes. religious beliefs and structural biases have to be changed.”--Hillary Clinton on Abortion.

Notice how she will cut down “deep seated cultural codes” (like patriots and family structures) and religious (Christian) beliefs which she openly states must be changed and structural biasis (against evil) has to go. Is this what you want? Don’t take this candy from a stranger. I say “stranger’ since nobody really knows what she really is, even though Satan DOES know exactly what and who she is.<

Our thanks to our anonymous researcher.

Rev. Austin Miles has broken many major stories including the required study of Islam in the public schools, reviews books, movies and concerts which brought him an award from Universityof California at Fullerton for Critical Review. He was a writer/researcher and technical consultant for the multi-award winning series, “Ancient Secrets of The Bible,” which debuted on CBS TV and has been in constand re-runs since. His website is: www.revaustinmiles.com