ACLU: A Noble History with an America Hating Present and Future 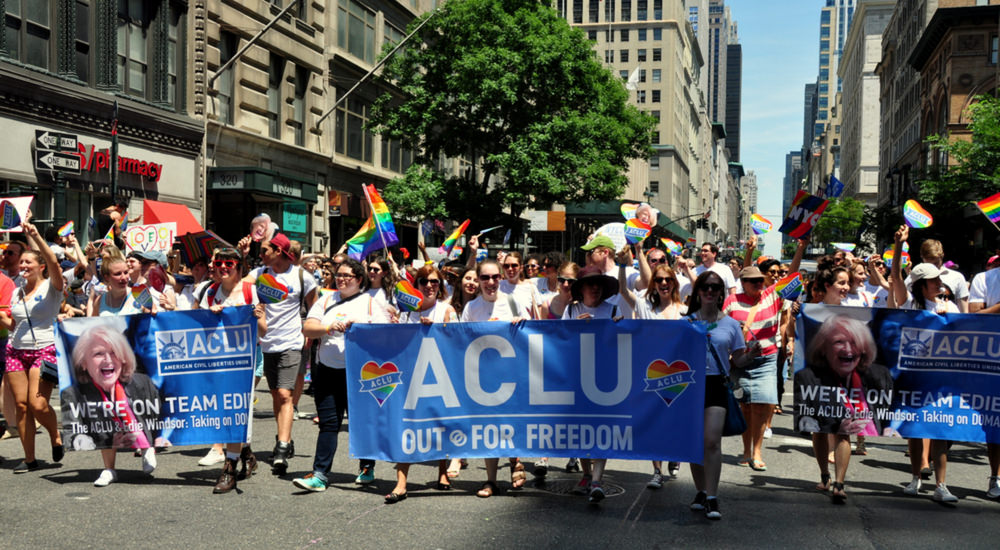 Since its inception in 1920, the American Civil Liberties Union (ACLU) has gone through an aggressive ideological transformation. The one-time defender of human rights and the First Amendment has, in many cases, betrayed the principles and spirit of its original mission. It has been usurped by a radical liberal element that is antithetical to the Judeo-Christian ethic, and American traditional values.

The ACLU’s representation over the years has included involvement in cases that have been highly controversial and constitutionally challenged before the Supreme Court, like the Scopes trial of 1925 that argued against the state of Tennessee banning the teaching of Evolution, and the 1973 Roe v. Wade decision that legalized abortion rights.

The ACLU has also injected itself into small insignificant situations in communities across the nation. Disputes that involve the placement of a Nativity scene or Ten Commandments monument on public property, Christmas songs in a school play, and then there is the baker, photographer, artist who wish to practice their religious beliefs, but have been subjected to the ACLU’s vengeance. In many cases all that’s required is one malcontent to complain or voice an objection to something they believe infringes on their rights, and the ACLU emissaries appear on the scene, threaten the town, school or church, into submission.

Much of the ACLU’s support efforts are applied in situations that I believe most Americans would tend to dispute and disagree with. And in most of these cases the organizations representation, such as defending the LGBTQ agenda at the expense of religious liberty and freedom, arguing against the teaching of creationism in public schools, supporting same-sex marriage, abortion rights, affirmative action, and its signature issue the separation of church and state; the ACLU will usually in most cases argue for the liberal side of the issue.

There are two institutions that have born a good deal of the brunt of the ACLU’s wrath, the Catholic Church and Law Enforcement. Their gripe with the Church, aside from its very existence, is that in following its religious doctrine and teachings, Catholic hospitals will not perform abortions, do not support same sex marriage, contraception and adoption services to same sex couple.

The Roman Catholic Church is the largest non-government provider of health care services in the world. It has around 18,000 clinics, 16,000 homes for the elderly and those with special needs, and 5,500 hospitals, with 65 percent of them located in developing countries. In 2010, the Church’s Pontifical Council for the Pastoral Care of Health Care Workers said that the Church manages 26% of the world’s health care facilities.

The Church’s involvement in health care has ancient origins. History has revealed that it was the Catholic Church that began the first hospital sometime around the 4th century. Catholic hospitals are not for profit, and yet they are more efficient, recognized for patient satisfaction and safety, and dispense health care to patients of all faiths in the U.S. They employ over 800,000 workers, again of all faiths. If Catholic hospitals were to discontinue their dedicated mission, then health care in America would likely collapse. And then who would handle this daunting task, and who would care for the sick, the ACLU?

As it does with the Catholic Church, the ACLU appears to have a vendetta against law enforcement. Most of the time, its efforts are contrary and in defiance of the police. The police officer today is confronted almost daily with a cacophony of complaints from a wide range of detractors: politicians, citizens, and even in some cases criminals.

Citizen’s confrontations with the police are usually a green light for the ACLU to inject itself into the situation. There are too many cases to count, but for brevity sake and as a good example of the ACLU’s unrelenting, and in some cases destructive modus operandi, this particular case should give you a good idea.

The incident involved a teenage girl on a Newark, NJ bus who began videotaping police who were caring for a man suffering a medical emergency. The officers asked her to stop, she refused to cooperate, and although they did not arrest her, she was handcuffed, I would think for interfering with their efforts.  It is apparent this young woman has little, if any, respect for the police who might have felt inhibited by her actions.

The usual outrage erupted and soon thereafter the ACLU appeared on the scene and filed a federal lawsuit against the Newark police department who were portrayed as bullies. This young woman was another godsend for the ACLU, an opportunity to inflict their own brand of justice, as deplorable and unfair as it is, on the men and women whose duty is to protect and serve the residents.

Perhaps the officers involved could have taken a different course of action, but there was a man in need, and time was of the essence. What transpired in the aftermath of this minor confrontation was nothing short of criminal. Making a mountain out of a molehill, the ACLU teamed up with a Seton Hall university professor and leveled charges based on a premise that this incident was only part of a pervasive pattern and practice of the Newark police department against individuals. This of course was all nonsense; civility, fairness and the integrity of the justice system are no longer in the ACLU’s egregious agenda.

Over the last several years the ACLU, in league with progressives on the New York City Council and in the courts, has had a negative impact on the police. The once lauded “broken windows policy” that crime figures would reveal was a success has been under attack since 2013 and the election of Mayor De Blasio. “Stop and Frisk” was another strategy that came under attack and through a court decision was discontinued.

Crime is at an all time low in New York City, and yet recently the same rogues’ gallery of leftists, including the ACLU, complained the NYPD and Civilian Complaint Review Board were going too easy on police misconduct. We can all agree that police misconduct is wrong under any circumstance. However, the NYPD over the past several years has been subjected to tremendous stress, abuse, threats, draconian rules and regulations, and even death. Is it any wonder that nerves are frayed, the anxiety level high, and anger lurking just below the surface.  The results and this has been attested to by a number of law enforcement officials, many on the beat police officers are holding back. They’re intimidated and are not performing their duties aggressively for fear of being castigated, sued, and their livelihoods ruined.

The ACLU and its rabid supporters have been a plagued on society, and their vendetta against the Catholic Church, and law enforcement knows no bounds. The damage they have inflicted over the decades is I believe tantamount to criminal. They have little, if any, respect for the rights and dignity of the police officer, the Catholic Church and people of conscience and faith. It’s un-American.