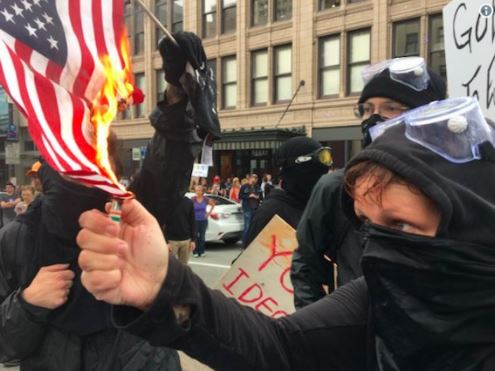 Five members of the domestic terror group called Antifa were arrested on terror charges while protesting outside a site for a planned $90 million police training center in Atlanta.

The site of the planned center has been the focal point of protests for months by Antifa who have referred to the site – which protesters have made an autonomous zone – as Cop City. Many of those who were arrested were holed up in treehouses where police later recovered explosives.

Prior to Tuesday’s arrests, police detained several people at the site for crimes including destruction of property and arson along with car-jacking and attacks on locals and government officials.

The official reasoning for the protest, according to a report from the Atlanta Journal-Constitution, is environmental concern for the Weelaunee Forest. The center would cut out 381 acres of the woods.

Among the photos documenting the protest is an image of a group of ski mask-clad protesters standing over a truck with a banner reading: ‘No forest, no peace, truck the police’ as well as a smaller sign that read: ‘No Cop City.’

Those arrested have been named as Serena Hertel, 25, of California, Nicholas Olson, 25, of Nebraska, Francis Carroll, 22, of Maine, Arieon Robinson, 22, of Wisconsin and Leonardo Vioselle, 20, of Macon, Georgia.

This is the least of the crimes committed by Antifa, of course. Antifa is responsible for act of terror all across the country. It’s just that because they are leftists, governments have refused to arrest them.

It would be nice of these anti-American criminals finally started getting their comeuppance.