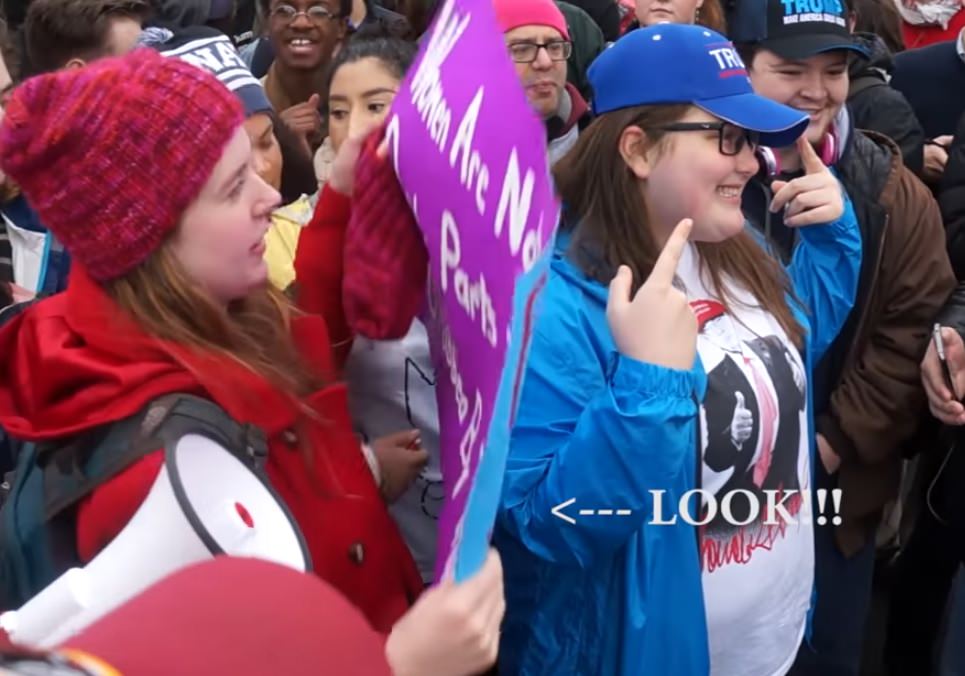 Most women didn’t know it. But the Abortion March was organized by a female Muslim Hamas supporter.* Militant Muslims do not want President Trump to succeed in taking out Islamic Terrorists like ISIS, Hamas & Al Qaeda and lose the privileged position they have held in America under Obama. They are working overtime to delegitimize Trump and stop him.

As reported by our friends at Front Page Mag:

“A leading organizer of the Women’s March was the Palestinian-American activist Linda Sarsour, executive director of the Arab American Association of New York. This group was founded shortly after 9/11—not to condemn the attacks, of course, but rather, to lament “the heightened sense of fear and the acts of blatant discrimination aimed at [the Muslim] community” in the racist wasteland known as America. On the premise that all government efforts to forestall additional terrorism constituted Nazi-like fascism, Sarsour and her organization played a central role in pressuring the New York Police Department to terminate its secret surveillance of the many Muslim groups and mosques suspected of promoting jihadism.”

Unhinged Liberals/Progressives/Communists, led by Hillary/Obama sponsor, George Soros, also worried at the loss of the power they had under Obama; lashed out at President Trump.

The women thought they were showing off their mighty power. But, in fact, they displayed their extreme vulgarity, abusiveness and lack of tolerance. First off, they disinvited a group of women who were pro-life. These women were very smart. Much to the chagrin of the Abortion Marchers; they ran and got in front of the abortion parade.

Then, they featured the most vulgar women they could find. Madonna had offered blow jobs to anyone who would vote against Trump. Then, she had posted photos of her pubic hair – I am unclear why she did this, except to demonstrate how vulgar she was. At the march, she and others used the F Bomb frequently. Madonna herself went so far as to threaten to bomb the White House: causing even Piers Morgan to state: “Publicly threatening to bomb the White House is a serious criminal offense. ‪@Madonna should be arrested.”

Liberals then attacked President Trump’s children. Ashley Judd alleged that President Trump is trying to have sexual relations with his daughter, Ivanka: “Trump is having wet dreams about his daughter.” Saturday Night Live writer, Katie Rich, attacked President Trump’s 10 year old son Barron alleging he will be a terrorist: “Barron will be America’s first home school shooter.” Rich quickly deleted the tweet after massive backlash from both Trump supporters and liberals alike. Twitter users referred to Rich as both ‘pathetic’ and ‘scum.’ It wasn’t long until Rich then set her Twitter account to private. On Inauguration Day, sick Comedy Central writer Spinola said President Trump’s very cute 10 year old son, Barron, looked like a “date rapist to be” and said he hoped Barron would “one day rape his mother.”*

https://youtu.be/rxbznGpN2n4
Another group beat up and bloodied a Trump supporter so he had to get treatment at a hospital.*

Deranged liberals even went inside hotel lobbies and attacked Trump supporters. Frank Luntz, a Republican pollster, was horrified at the attacks. Crazy, Drunk liberal women screamed abuse at him and other patrons. Then one approached within 6” of him and tried to blind him by throwing stuff in his eyes!!*

Liberal vulgarians wore “Pussy hats” supposedly symbolizing their outrage at President Trump. But, in case you have forgotten, wearing bright pink costumes looking exactly like female genitalia is the standard uniform of Panned Parenthood supporters even as far back as 2012! According to these liberal women, showing your vulva and vagina empowers women!! I am unclear how this would work amongst Islamic Terrorists, but I guess liberal women would like to be raped by crazed and uncivilized men!!

But ultimately, this march was about one thing; forcing us tax payers to pay millions for their abortions. Nowhere on earth does any female, human or even animal, rejoice in killing its own offspring. In fact, female animals defend their young with their own lives! Nowhere among civilized people does any human think it is “heroic” and “courageous” to murder a helpless human being.

These women absolutely refuse to use any form of birth control, even long-term IUD’s; which would prevent contraception and do away with the need for abortions. They actually believe that killing the baby inside their wombs empowers them!! Two Congressional Investigations have delineated the horrors and criminal acts Planned Parenthood abortionists are performing.*

Nevertheless, these marchers continue to pretend that killing 60 million babies by crushing their little skulls, tearing out their limbs, and allowing Planned Parenthood to make millions by selling the baby parts, is acceptable. Finally, their T-shirts showed what this march was really about. “Abortion on Demand & without Apology!”